Money is Always the Answer

There has always been the stench of impropriety surrounding horse racing.  In the early 20th Century the practice of using drug cocktails containing such things as heroin or cocaine to enhance performance was common.  The standard seems to have been, "Just don't get caught."  While testing today is more sophisticated, there are those willing to buck the system.  Drugs can be used to enhance performance or to mask injuries allowing unfit horses to run without regard to consequences for the animal.  Rick Dutrow, who trained Derby and Preakness winner Big Brown, was suspended several years ago for flagrant and ongoing violations, including improper drug use.  His attempts to overturn his suspension in the court system have failed.  Dutrow's circumstance is the exception rather than the rule however.

Harness racing has not been immune to controversy either.  In the United States, harness racing once rivaled baseball in popularity. The sport is thought to have originated with Assyrian kings more than 3500 years ago and ripened among the Greeks and Romans. By the fourth century, Rome's Circus Maximus, where harness racing took place, seated 200,000 citizens.

Corruption, immorality and inhumanity can be jarring things when we are exposed to them.  The following is a Facebook conversation that I was involved in recently, which graphically shows the lengths that some will go to in order to win.

First, a disclaimer.  I do not know the person who makes the claims here.  He, and it is a "he", would not allow me to interview him, refusing saying, "No, I am not interested in that at all."  And finally, he claims in writing to be a trainer/racer, but a check of his Facebook profile showed that he is a groom.  To protect him I have deleted his name.  I might add that his typing and spelling is iffy.

The track that I make reference to in the conversation is the old Lebanon Raceway, where my uncle, who is deceased, worked and was part owner of an unruly trotter named Speedy Trip, a gelding foaled in 1961. 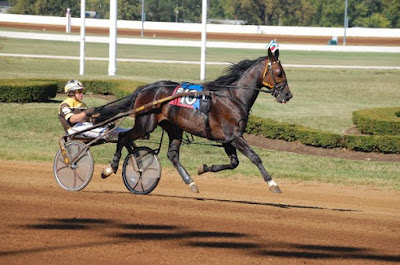 " I don't care which trainer is which. Etc. The fact of the matter is we are dopping in this sport. I train and race standardbreds. It is hard to compete and make money when people dope for speed. I see it way to much
I enter a horse in a 5k race
Because of the dope I get 2nd or 3rd. It's ok money but I or the owners can't live off it. What do you do? We have to do something ! I'm no expert. I'm just a half ass trainer trying to figure
The best our for everyone"
5


As depraved as those who dope horses are, it is the stomach-turning cowardice of racing's governing bodies in dealing with the issues, which has severely damaged racing's image in the public view. Doping is just one of racing's many concerns.  Consider the increasing number of race and training related deaths, as well as the number of horses being found in kill pens and you easily see why attendance, handles, foal births and ownership are in decline.

I don't want to close without acknowledging the strides made in equine aftercare.
Trainers and horse lovers are working together to provide new homes and new careers for horses whose racing days are over. There are numerous organizations, such as Old Friends in Georgetown, Kentucky, that provide forever homes for pensioned horses, whether they raced to glory at Churchill Downs, or labored in anonymity.  All are welcome.

Copyright March 25, 2019 by Loren Schumacher
All photos by Dean Hoffman i