Somehow the words to the song Route 66 came to mind whenever I read about Valerie Ashker, her friend Peter Friedman and their two off-track Thoroughbred horses, Primitivo and Solar Express, on the Off-Track Thoroughbreds.com website.  Route 66, now a relic of our motoring past, ran from Chicago to LA, nearly 2000 miles one way, but only two-thirds the distance Ashker, Friedman and their horses planned to ride.

For those of you who have never been to the United States, it is a big country. I mean it is a big country.  More than 3300 miles end to end, it crosses desert infernos, the Rocky Mountains, where a fourteen thousand foot mountain is more the norm than an aberration, The Great Basin, home to freakish weather and the dust storms of the Great Depression, until the green rolling land of the mid-east gives way to the ancient Appalachian Mountains and then to the eastern most coast and some of America's greatest urban centers.

Valerie Ashker, 60, is a long time Off-Track Thoroughbred trainer, she, her daughter, Lainey a four-star Eventer and Rolex competitor and Friedman left her Georgetown, California ranch in May of 2016. 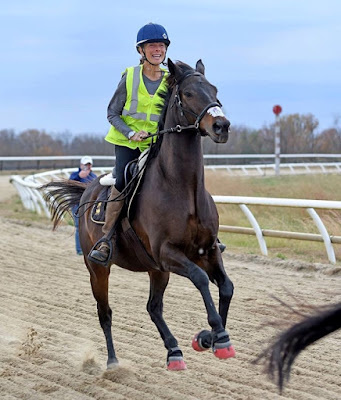 A joyous gallop for the camera.  Valerie Ashker and Primitivo.
(photo by Tylir Penton)

The mountains and high altitude came quickly, as did a number of falls that left Ashker with broken ribs and and a broken clavicle.  Along the way a suspicious spot discovered on her lungs was found to be scar tissue from an earlier injury and not cancer, as was first feared.  The emotional and physical toll did not weaken her resolve as she was determined to "call attention to the usefulness of Thoroughbred horses once their racetrack careers are over."

Of the ride she said, it is "not about me, but about the horses that have so much to give once their racing days are past."

It was when Ashker and Friedman reached Cincinnati (my hometown) in mid-October that I began to follow their progress as they made their way toward Loudon County, Virginia, their destination. Solar Express and Primitivo ambled along our city's congested roads with the cool confidence that experience bestows. They stood calmly as children from a city apartment complex swarmed around them "like bees," asking countless questions and hoping to pet the horses which most of them had never before seen in the flesh. 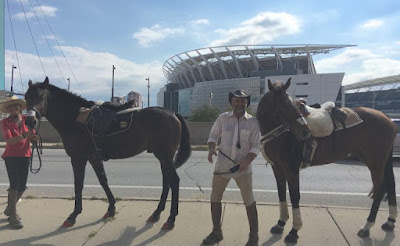 By November 7th, the caravan had crossed into Grafton, West Virginia where Ashker took time to thank the local Dairy Queen for the complimentary ice cream cones (for human consumption only) and gave thanks for the great weather that we have experienced in the mid-east this fall.  By now we are usually experiencing nights in the low 30's F, killing frosts and torrents of bone chilling rain that can turn to sleet and sometimes to snow.

The journey ended in November with their arrival at the Middleburgh Training Center in Loudon County, Virginia, with smiles, hugs and a good gallop by the fit and trim Thoroughbreds that delighted the eye and the camera. 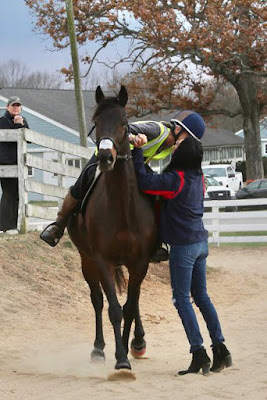 Primitivo, Ashker said, began as "sort of spooky, " but quickly adjusted to the noise and confusion of busy highways and congested cities.  "Along the way he became more confident in his own skin," she said. 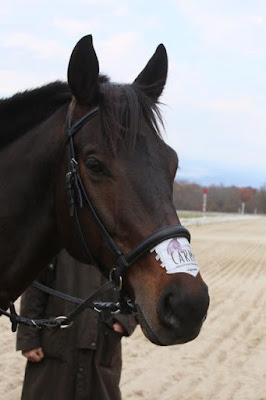 "This horse never stops," she said of Solar Express. "He had his eye on the next mountain and the next twenty miles the whole way."  Solar Express was once her Eventing horse and Ashker once said that he was "on the muscle too much."  She added, "Now I see that he belongs in the realm of endurance horses.  He lead the entire time...his ears pricked." 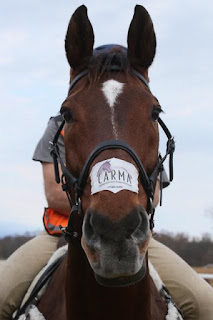 Ashker and her horses will soon be moving to Virginia where they will have time to reflect on their journey and its meaning,  Saying of the long haul, " I have a total new appreciation for the country and its people. And the timing was right.  Looking back on the entirety of this, I'd say its been the ride of a lifetime." 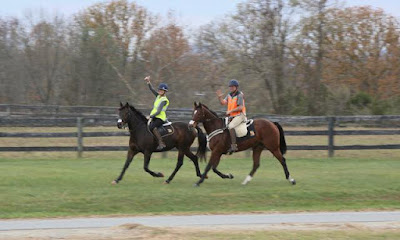 A fitting end.  Look at the condition of these two horses.

Your can also learn more about Valerie Ashker's journey on her Facebook page: 2nd Makes Through Starting Gates.

Only one photo has been credited and the balance came from each of the websites/Facebook pages noted above.  They seem to be without credit.

Posted by Loren at 4:42 PM No comments: Links to this post