There seemed to be less anticipation surrounding this year's Road To The Horse, arguably the world's premiere colt starting event.  There were no larger-than-life characters such as Clinton Anderson, Craig Cameron and Pat Parelli, or legends such as John Lyons.  Missing as well was the quiet excellence of three time RTTH winner, Chris Cox.  Yet the resulting contest was every bit as exciting as any in the previous ten year history of the Road To The Horse.

For the second year RTTH was held at the Kentucky Horse Park's Alltech Arena.  The park is a working horse farm of more than 1000 acres and is a museum and historical research facility as well.  Fabled horses such as the incomparable Cigar can be seen there.  The park is also home to the United States Equestrian Federation (USEF).

This year's remuda was once more provided by the fabled Sixes Ranch (6666) of Guthrie, Texas.  The horses had all been halter broke, gelded, had their hooves trimmed and received necessary inoculations as yearlings and were then turned out for the next two years into a 5000 acre paddock.  Until they were shipped to Lexington, these three year old geldings had had contact with humans no more than 2 or 3 times.

Canadian Jonathan Field, who was competing in his second RTTH competition, is one of my favorite clinicians.  This year he chose a sensitive, skeptical and challenging horse, a chestnut that he named Mojo, " because he has a lot of it."  Field said he found Mojo to be "intelligent and a quick learner looking for leadership."  Mojo was more than a little sensitive about his flanks being touched, and that sensitivity would play a major role in Jonathan's third day performance.

Each clinician would spend about 90 minutes working with their colt on each of the contests first two days.  On day three after a one hour morning session each horse and rider team had a 40 minute segment in which they were required to complete a number of tests such as walk, trot and canter on both leads, back, mount and dismount as well as showing that all four feet could be picked up.  All of the clinicians used at least part of their 40 minutes to continue their mount's training and Field was no exception.

Jonathan and Mojo were on top of their game.  Cheers greeted them as they completed the required maneuvers and entered the obstacle course.  Twists, turns, rubs, squeezes, jumps and gates were all features of a course decorated like the Flintstone's Jellystone Park!  At the drag, Field was able to twirl a lasso over Mojo's head without problem.  But as he began to pull the drag his rope touched Mojo's flank, and when it did, we were treated to an impromptu rodeo of twists, kicks, and views of Mojo's belly as he bucked across the arena.  Field was thrown near the arena's concrete wall and for a moment it looked as though he would be drug.  Being drug is the one thing a rider fears above all else and nothing good ever comes of it.  Unhurt he jumped to his feet with the front of his white shirt now a deep red matching the arena's dirt floor.  Field remounted Mojo and finished the course, including the optional teeter-totter, to the roaring approval of the 8000 in attendance.

Oddly enough, during the selection process I mentioned to my wife that I thought #10, Mojo's hip number, might do well for Field.  Mojo showed a lack of fear, curiosity and even followed one of the other clinicians around as he made his selection.  Sorry about that, Jonathan.

Over the course of the three days each clinician gave a clinic and performed a mounted demonstration.  Field's Spanish Pole Dance astride his half-Arab horse, Quincy, to Metallica's, Nothing Else Matters, brought most to tears with its beauty and grace.  The power of this demonstration leaves you speechless and in awe of the trust and devotion Quincy and Field have for one another.  Quincy was given to Field after having six owners in the first seven years of his life.  He would bolt, rear and sometimes flip over backwards. It took someone like Jonathan Field to save Quincy's life and to give him a new one.  You can see them together on YouTube.  The video is Amazing Performance by Jonathan and his horse Quincy 2012.
You will love it.

Though he did not win the competition Jonathan was awarded the prestigious Jack Brainard Horsemanship Award.  The award is given to the competitor who best demonstrates the qualities of horsemanship and the horse and man relationship.  Brainard, who is more than 90 years old, provided a bit of levity when he introduced Field as, "Jonathan Winters," the famed comedian and actor.

Are your tired of Jonathan Field yet?  Last but not least, "Loren's Best Tee Shirt Award," also goes to Jonathan Field.  As a proud Canadian Johnathan's red tee shirts read, "The "eh" Team."  You gotta love it. 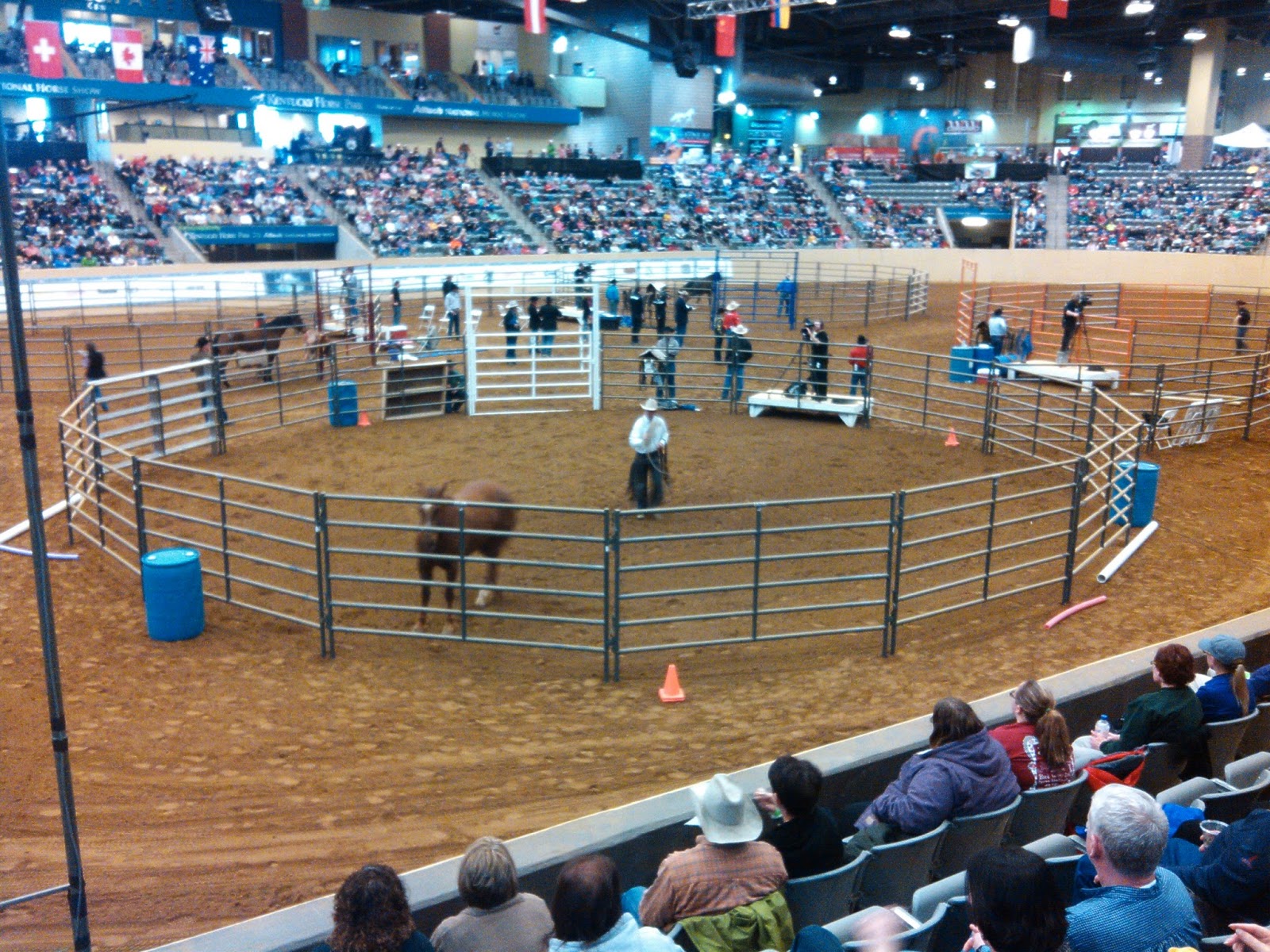 Johnathan Field trying to get Mojo to "join up."

Another of the contestants was Dan Steers, the other half of Double Dan Horsemanship.  Steers mans the Australian continent while Dan James, who choreographed much of this year's entertainment using his horse, "Swampy," concentrates his efforts in the United States.  Dan was pen-wrangler for Dan James in the 2013 event.  Like all of the contestants, Steers was business-like and not given to a lot of chit chat when questioned by color commentator, Richard Winters, 2009 Road To The Horse Champion.  Dan did display a bit of cheeky Australian humor to the audiences delight.

For the most part I think Dan's accomplishments with the horse he named "Ringer" were overlooked.  Why?  Because Ringer was curious and willing from the start though not without issues.

Dan really wanted to buy "Ringer" but mentioned that it would cost $35,000 to $40,000 to to ship him to Australia.  However one of Double Dan's interns, Shalise, purchased "Ringer."  I spoke to her by phone and she admits that the name, one that she doesn't care for, will stick.  She would have preferred something a little classier, she said, but Double Dan said they would have called the colt "Ringer" anyway. 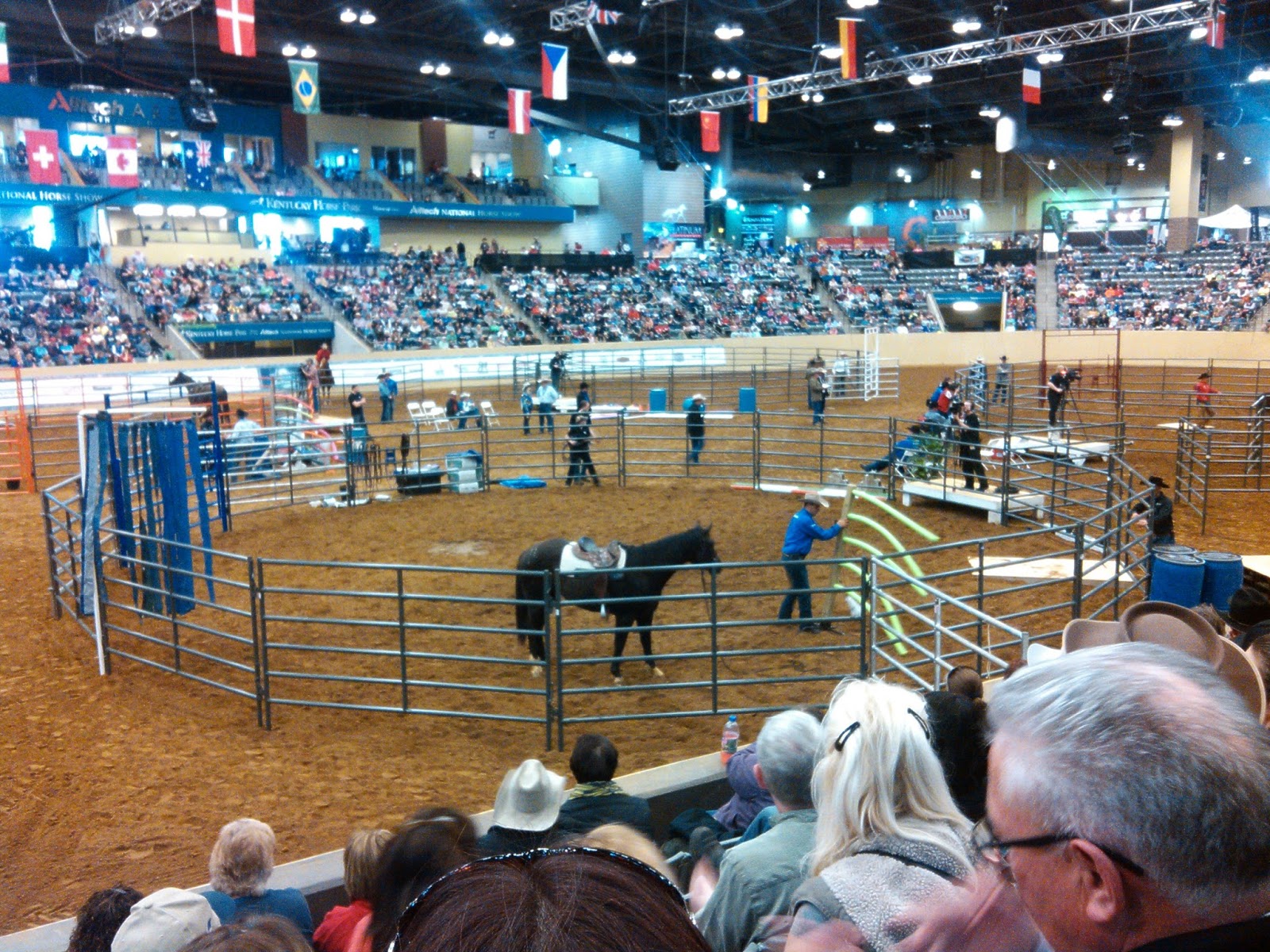 Dan Steers setting up a "rub" for Ringer to pass through. 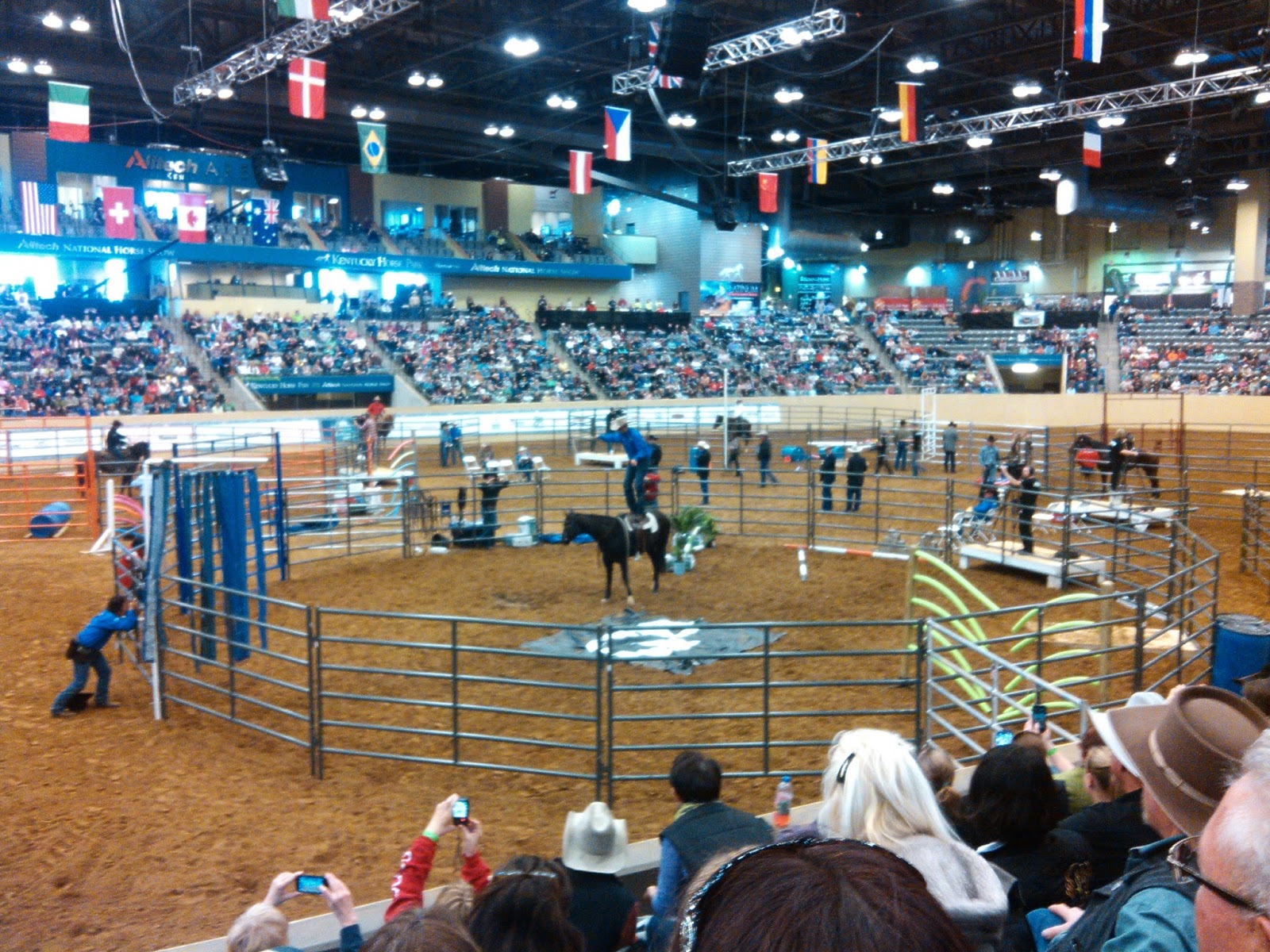 Antoine Cloux of Geneva, Switzerland, had a difficult weekend with his colt.  He called his gelding #5, its hip number, and said about him, "He's cutting bred, but he looks at things and I don't want to take that away form him."

Until the finale, #5 showed little in the way of forward movement, but put on a Hereford calf during the freestyle demonstration he showed focus, energy and that much sought after forward movement.  In an email to me Antoine said, "...it's amazing what they can do for us if we just wait for them."  And on Sunday he proved the truth of that statement.

Antoine is the only European horseman to participate in the 2012 and 2013 Horseman's Re-Union and one of very few Europeans recognized internationally.

Here is a link to Antoine: www. antoinecloux.ch/philosophy  Also you can catch him on YouTube.  Watch The Horseman's Re-Union Day 2.  Johnathan Field appears on this video as well.

The "Wild Card" winner, Jim Anderson of Saskatchewan, Canada, emerged from a field of seven qualified and talented professional clinicians.  Jim, although unknown to me, is highly respected in reining as both a trainer and competitor.

His horse, whom he called "Smokey," is the only Grullo colt ever born on the Sixes ranch dating back to 1870.  To be a Grullo a horse must have black or brown legs, a head darker than its body, a distinct dorsal stripe and dark tips on its ears.  There are other possible markings but they are not required,  The Grullo's coloration represents the dun gene in a black horse.

Anderson proved his that his Wild Card win was no fluke by putting in a solid workmanlike performance.  Jim was the least verbal of all of the competitors.  His answers were short to the point of being disrespectful.  And while he may have needed a crash course in showmanship, he got the job done and was all smiles and more than willing to speak when he was named the 2014 Road To The Horse champion.  It was a hugely popular win as the dark horse/every man clinician bested his better known counterparts. 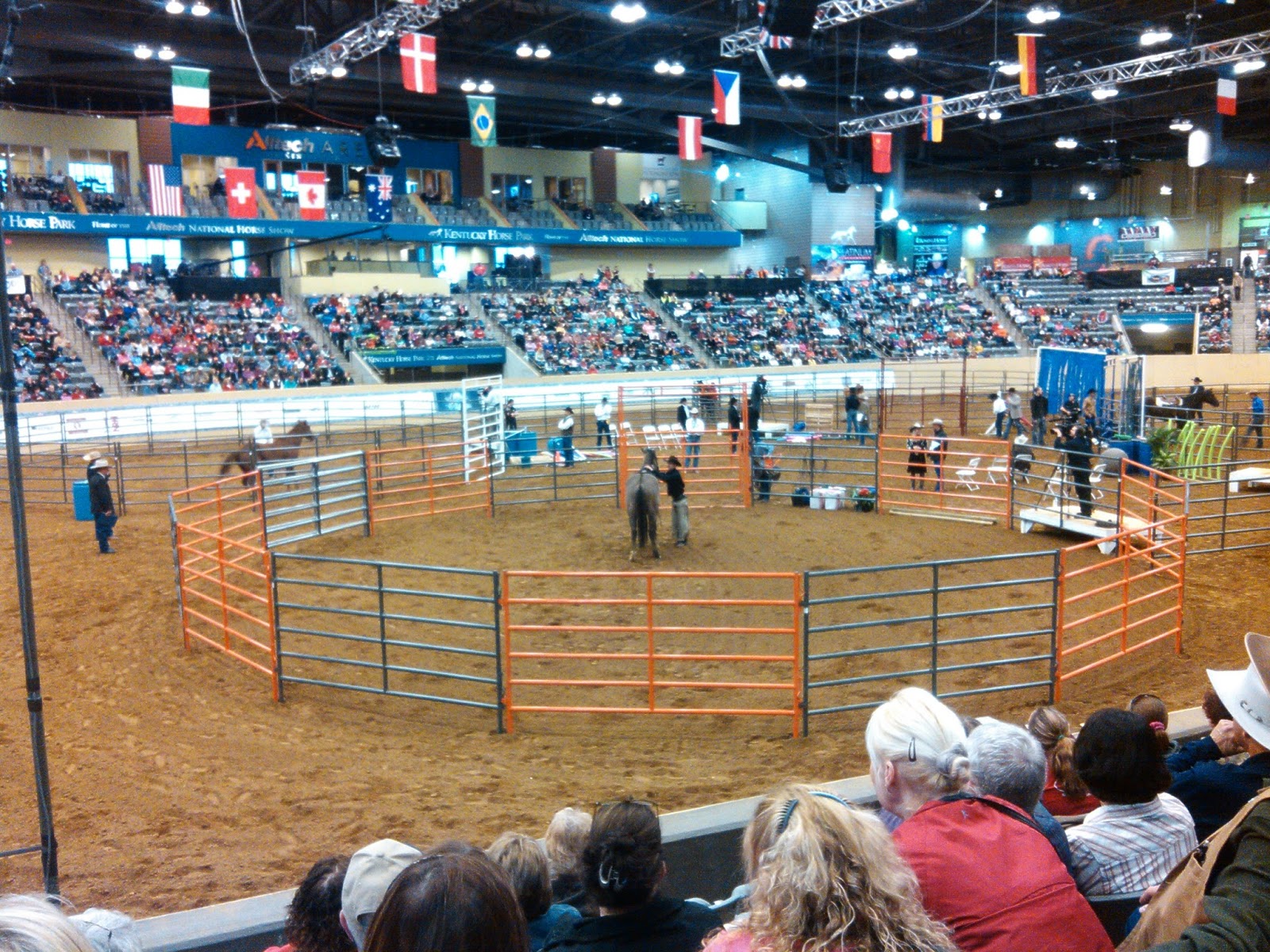 You can plainly see Smokey's dorsal stripe in this picture. 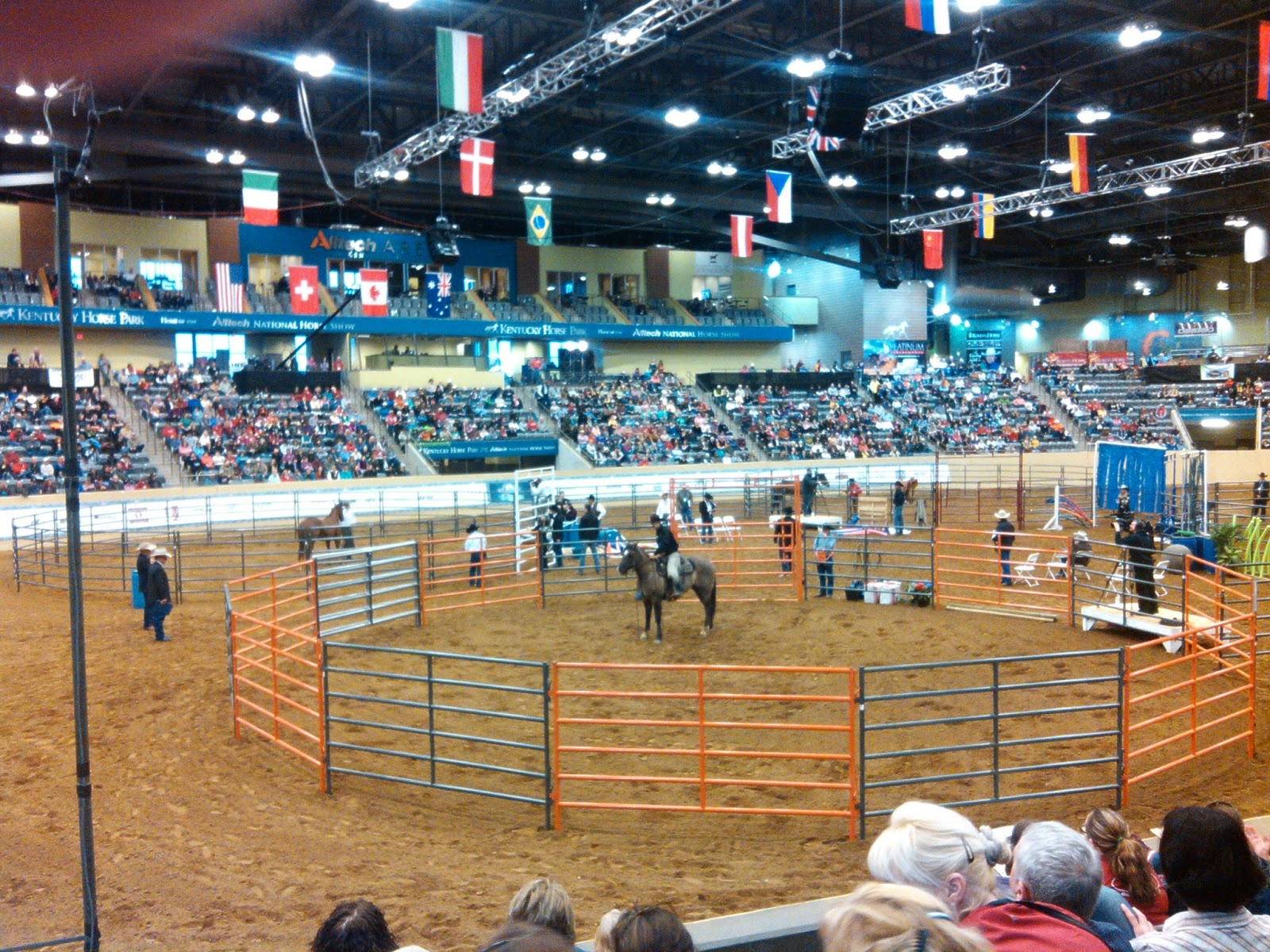 Another link you may enjoy:
www.jonathanfield.net/

This link provides a great video of the third day of competition:
/vimeo.com/89232340

Next years purse has been increased to $100,000.00 and better yet, three members of the audience will be chosen to participate with the clinicians on the floor of the arena.  You can imagine how much I'd like to be one of those selected.

Posted by Loren at 6:10 PM No comments: Links to this post

I Hate Talented People, Don't You?

While I plod along like Ol' Dobbin pulling a plow, my wife, Carol, has pushed her artistic boundaries beyond  anything she could have imagined or hoped for.

Just a few years ago she set her sights on becoming a fabric artist, an art quilter to be more precise.  Art quilts are just that, pieces of art to be hung and exhibited.   Her reputation for quality and originality has grown.  She regularly exhibits in a local gallery; her work hangs in homes from Ohio to Florida; she has even had work appear in a national quilting magazine.  And she's made dolls that have been snatched up by a local collector.

This past Christmas she asked me to buy her an on-line art class originating in England.  Just three months ago she could not draw a bead on a target, but today, well, I'll let you be the judge.  These are four of a series of whimsical gift cards, and no, I'm not shilling for her.   They're are not horses, but I think you'll enjoy them anyway.

Oh, and by the way, I'm really proud of her. 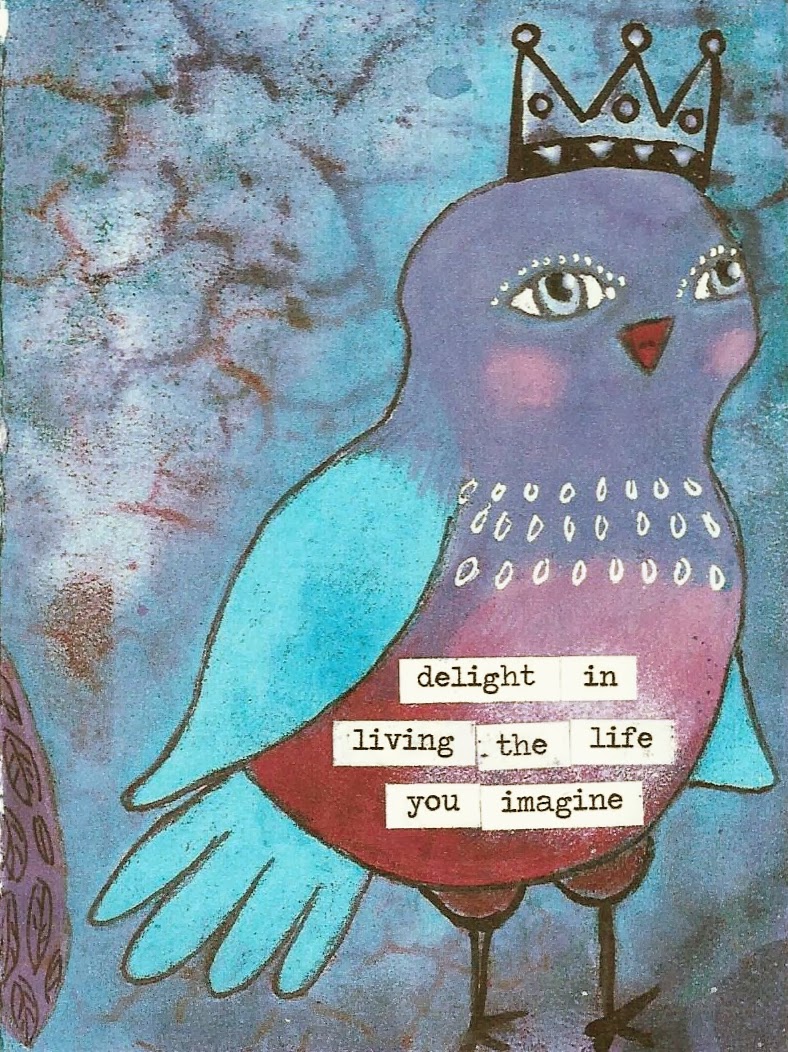 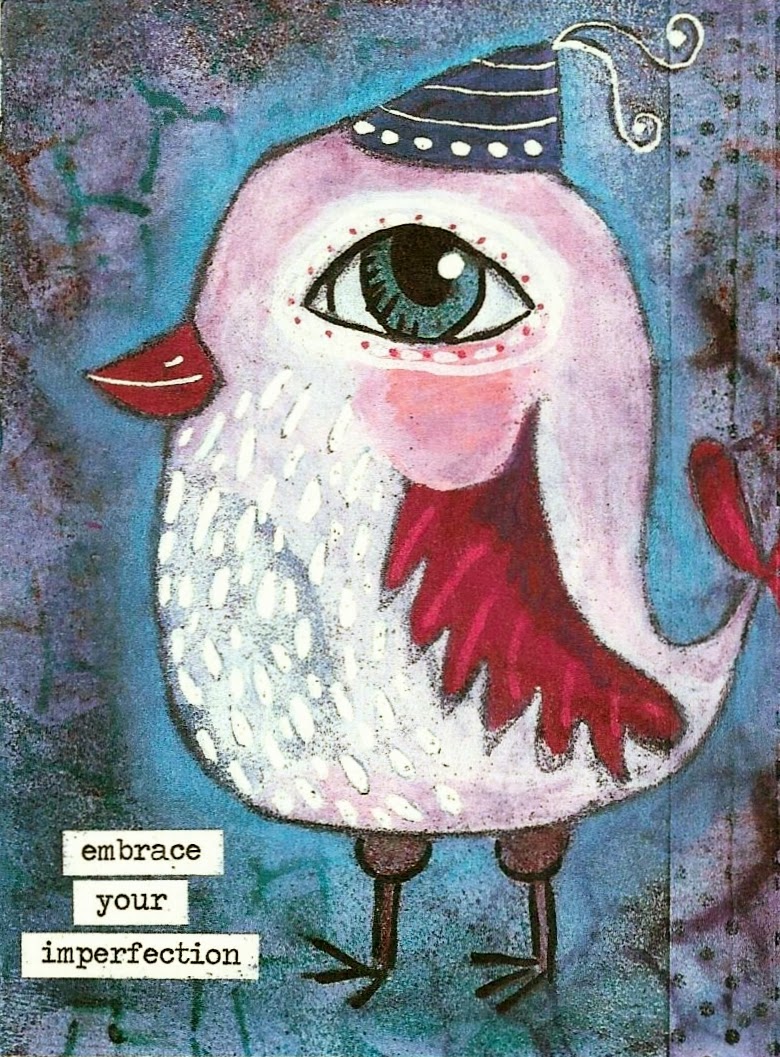 Posted by Loren at 11:30 AM No comments: Links to this post

One of my clients forwarded this photo to me yesterday.  She has avoided our latest snow storm by laying over in the Carolinas while her daughter, who forwarded the photo, vacations in South Africa.


I had an epiphany this morning about the "magic" of technology.  On March 1 this photo was taken somewhere in South Africa and sent to the Carolinas, then forwarded to Cincinnati, all in the space of a few minutes.  What an incredible world we live in.


Part of this picture has been cut off.  The little girl being eyed by the Cheetah is the daughter of the sender. 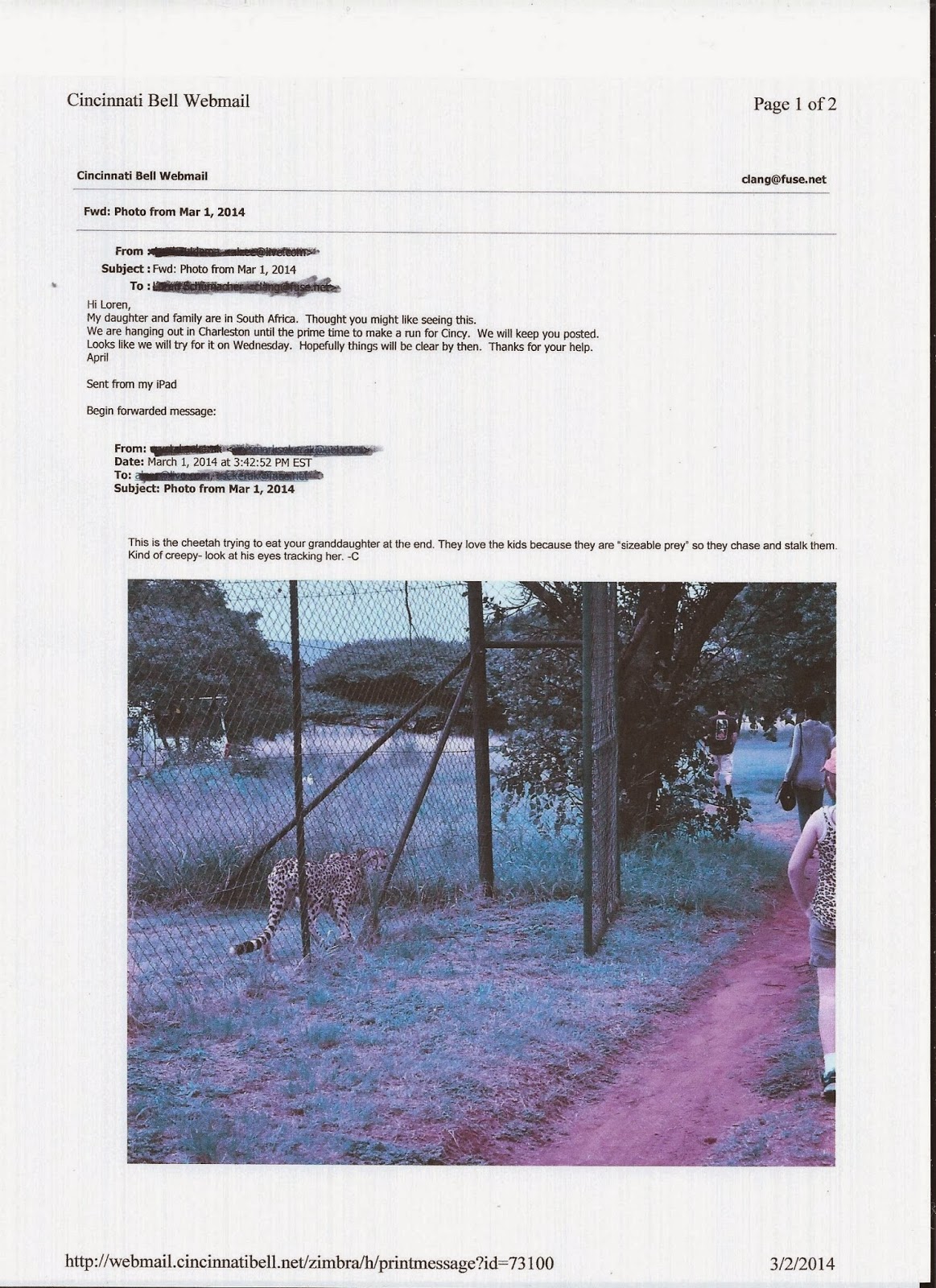 Posted by Loren at 10:34 AM No comments: Links to this post