The three foundation sires of the modern Thoroughbred date to Byerly Turk, 1680, Darley Arabian, 1704 and Godolphin Arabian in 1729.  Wild Dayrell, an English Thoroughbred foaled in 1852, was just six generations removed from Herod and eight from Godolphin Arabian.  He was the product of the union of Ellen Middleton, a horse purchased for 50** guineas and the runner up in the Epson Derby of 1838 to Ion.  A photo of Wild Dayrell taken in 1855, the year he was retired, is the earliest known photographic image of a Thoroughbred. 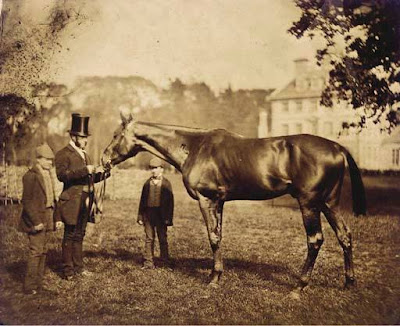 The Geelong Advertiser and Intelligencer (Canberra, Australia) of Friday, September 14, 1855 described him this way:
"He is a rich brown horse, standing sixteen hands one inch high of immense power, he has a good lean head, rather long arched neck (compare to paintings of the Godolphin Arabian), good shoulder, great depth of girth (69 inches), immense ribs, and very powerful strong muscular quarters, immense arms (?), gaskins, knees, and hocks and is very short from knee to ground.  If anything, he is a little "in" at the elbows, and his toes turn outward.  He has no white about him and "take him all in all," is one of the finest specimens of a race horse that has been seen for years."  It looks like he might be "sickle hocked" as well, but it could just be the way he is standing.

His breeder, Francis Popham of Littlecote House in Wiltshire, had no prior experience in breeding horses, nor did his "trainer," John Rickaby, Popham's "hunting groom." Throughout his brief but successful racing career, Wild Dayrell was dogged by the public's opinion that he had been "trained by a gardener."

Wild Dayrell's name is the stuff of local legends in Wiltshire.  It is said to stem from the murder of an illegitimate child.  Its unthinkable death came at the hands of one of Popham's male forbears named Darrell.  The child was first thrown into an open fire at Littlecote House.  When it somehow escaped the flames, the baby was thrown onto the fireplace grate where it died.  A scorned husband could leave no evidence of a woman's infidelity it seems.

Wild Dayrell was sold as a yearling for 100 guineas, with an extra 500 guineas to be paid should the colt win the Epsom Derby.  The purchaser was John Kent, the agent for Lord Henry Lennox, the son of the Duke of Richmond.  These people traveled in lofty circles.

As a two-year old in 1854 he was repurchased by Popham for 250 guineas after proving himself "backward and immature."  Popham sold a share in Dayrell to Lord Craven and on September 27, 1854 the horse easily won by two lengths a three-horse sweepstakes at Newmarket, beating horses named Hazel and Para.  In winning, Wild Dayrell so impressed onlookers that he was installed as a contender for the following year's Epsom Derby.

After turning down a 3000 British pound bid for the horse by Baron Meyer de Rothschild, his owners stepped up the pressure, racing him in a private trial just 10 days before the 1855 Derby, where he soundly defeated three rivals, including a classy colt by the name of Jack Shepherd, while giving away 21 pounds to his three rivals.

What followed is the stuff of Hollywood. Gamblers and bookmakers feared loosing a small fortune should Wild Dayrell win the Derby.  A member of Popham's staff was let go for acting "suspiciously" and the horse was put under guard.  There is more.  The horse-box (trailer) hired to transport the colt was sabotaged and collapsed when it was pulled by a bullock.  Then a 5000 British pound bribe was offered to Popham and Lord Craven, which they refused,

The even money favorite against an eleven horse field that included the 2000 Guineas winner, Lord of the Isles at 7/4.  Stalking the leader Kingstown, Dayrell made his move just a furlong from the finish, winning by a length from Kingstown with Lord of the Isles finishing third.   Lord Craven made a killing on the outcome, winning 10,000 British pounds, While Lord Craven cashed in, Dayrell emerged from the race lame in the left front, most likely because of the course's firm turf.  His unfortunate injury would resurface later.

He won in a lark at York in the "Ebor St. Leger" over a well thought of colt named Oulston.  He was next entered in the Doncaster Cup, a race of two and a half miles.   While he was the favorite and gave away seven pounds to his rivals, he came to the post with heavily bandaged legs.  He pulled up lame, failing to finish for the first time and suffering his only defeat.  A short while later he was retired and first stood at Littlecote for 30 guineas, where he sired many winners including his daughter, Hurricane, the 1000 Guinea winner of 1862 and Atlantic, the 1874 winner of the 2000 Guineas.

Wild Dayrell died where he was born, at Littlecote in November 1879.  He was 27.

One writer said of him, "There is no saying how good as a race horse he really was," because he was never truly tested.

Compare if you will, the photo of Wild Dayrell to Thoroughbreds of more recent vintage: 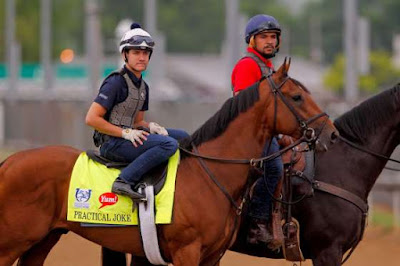 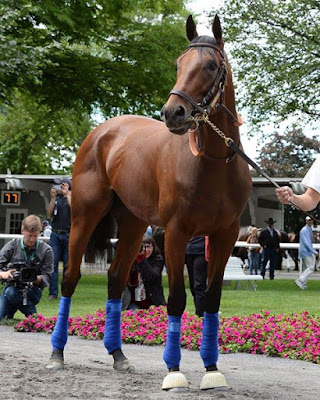 Regardless of who wins the Kentucky Derby on Saturday, May 6, 2017, we wish horses and riders alike a safe trip and God's speed.


** A historical currency calculator gave me the buying power in current US dollars and these are the results.

These numbers would be enough to save Downton Abbey!

Copyright May 4, 2017 by Loren Schumacher
Copyrights for all photos belong to the photographer