Another Black Eye for Racing

With the death of yet another horse at Santa Anita, making 23 in the last four months, United States Senator Diane Feinstein has asked the California Horse Racing Board to suspend racing at the track and to move its dates to another venue.  Die hard fans of horse racing are beginning to turn away from the carnage.

If the tragedy of Santa Anita weren't enough, add to it the drowning of a trotting horse at Miami Valley Gaming's harness track in Monroe, Ohio.

"The horse was already dead when he got there,"  The "he" is Mike Jameson, Turtlecreek Township Fire Chief, who donned his wet suit and entered the murky, cold water, feeling blindly for the horse, even though it was known where the horse had entered the water.  While a track worker had immediately gone into the water after the horse, it took two rotating 2-man teams an hour to find the animal that was still harnessed to its sulky. 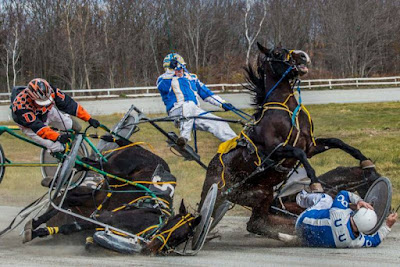 Wrecks like this one in Australia can be deadly to horse and driver.

The race was a 1-mile event with a $12,500 purse.  Driver Kayne Kauffman, a winner of more than 3000 races and $20 million, fell into last place.  As he began to move his horse "He's A Perfect Ten" into contention, the racing was four-wide in front of him.  Another driver, seeing no way around the bottleneck, slowed, causing Kauffman to check-up, and when he did, he was hit from behind and thrown from his bike (sulky).

The track announcer warned the drivers of the driverless rig loose on the track, warning them to use caution.  But the horse "spooked" and ran into a retention pond where it sadly drowned in ten feet of water.

But it is the callousness of race officials who did not suspend racing, but allowed the card's last two races to be run, that boggles the mind.  And it is just this kind decision making, absent of the natural human emotion that attends tragedy, that gives the radical animal rights activists fodder for their cause and causes the fan to turn away from the spectacle of horse racing. 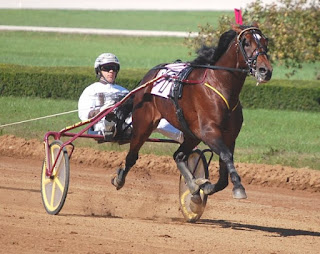 When all goes well.

Of course this incident was a freak accident, but consequences have very little regard for the facts.

Photos: Credit belongs to the photographers
Posted by Loren at 4:22 PM