First, Thank You, Then A Few Changes And A Couple Of Questions

I was amazed to find that this blog has been viewed in fourteen countries around the world.  Fourteen Countries!  I can't believe it, so thank you all and I hope you've been entertained, learned a few things along the way, and leaned back in your chair with your hands clasped behind your head and dreamt.

And now a few changes this blog has needed.

It's rainy, humid and unusually warm for the end of October.  Winds are gusting to 50 miles per hour as I write.  We'll soon "fall back," gaining an hour of sleep and leaving "Daylight Savings Time" until next spring, putting it away until it's needed again, like a tool

We've already had a bit of sleet and a few snow flurries.  Soon the air will snap with cold and my boots will leave a trail in the snow that even I can follow.  The footprints of our nocturnal visitors will dot the snow: coyote, rabbit; fox; skunk; deer and others.  As winter deepens birds will find it hard to live until the sun rises the next morning and the deer will eat our bushes or any seed the birds leave behind as the sun begins to set.

Ice will freeze Stormy and Callie's whiskers and ice balls will form on the soles of their feet.  I'll chip away the ice with a rusty pair of Channellock pliers and then the horses can stand easily on their own feet.  While I work our breaths will rise and join in the air, forming an opaque cloud, damp and temporary. 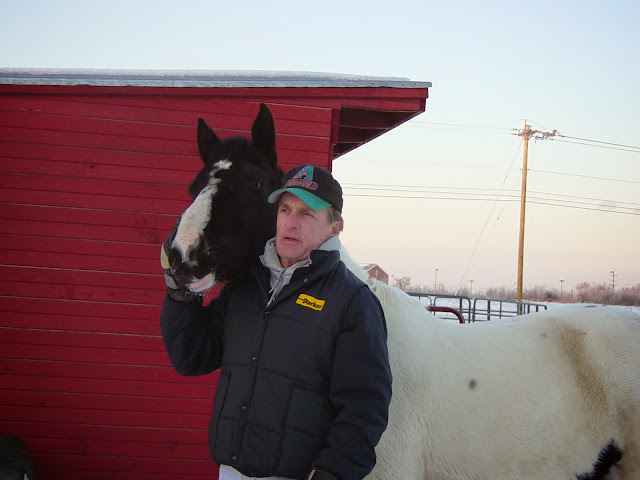 The hat is gone and the zipper on the coat has broken, but Stormy and I remain.
Winter can be difficult in southern Ohio for both man and animal.  The horse's coats are thick, but as different as the horses themselves.  Stormy's coat is thick, so thick that my hand leaves its print when I rub her back.  It lays flat against her skin like a black and white blanket.  Born in the upper reaches of Manitoba, Canada, Callie's dark bay coat sticks straight up like a man's whiskers. 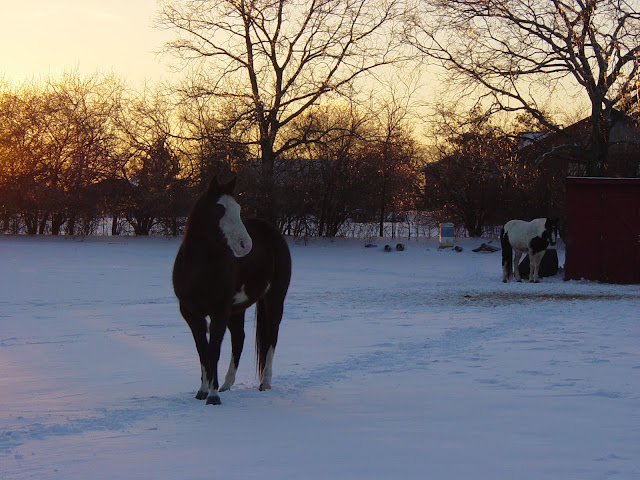 Callie and Stormy at the end of day.
Sometimes, when the temperature stands near zero and snow lights the night, I stand by the horse's stalls and hear them chew or sigh, and I wonder at the stars and know that nothing can be better than that moment.
Copyright, October 31, 2013 by Loren Schumacher﻿
﻿
﻿
﻿

Posted by Loren at 2:21 PM No comments: Links to this post