Are horses capable of love?  According to Greg Kallmeyer, owner of Kallmeyer Equestrian Center in Burlington, Kentucky, the answer is unequivocally no.  He scoffs at the idea when he says that we are, "...ascribing human characteristics to animals..."  He made his comment in a story published by the Cincinnati Enquirer on November 2, 2015.

When my wife Carol read the article she knew that Kallmeyer's comment would trigger an immediate and visceral response from me.

Only in recent years have we begun to study the emotional lives of the animals with whom we share the planet.  As we gain greater knowledge and insight, our attitudes towards, and no doubt our relationships with our animals will change dramatically.

Here is my take on the subject.

As animals of prey, horses are reactive as opposed to being cerebral, thinking creatures.  We are not discussing their sentience, but rather their capacity to feel.  However, because their need for food, shelter, security and reproduction closely mirror our own needs, we might ask, is it a stretch to believe that their emotions are very similar to ours, even though they may be demonstrated in different ways? 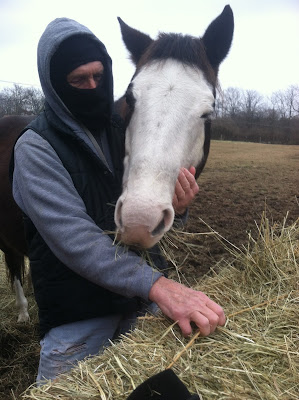 Has my horse Callie been deprived of the ability to care about me?

Horses evidence much of their physical and mental state through a variety of physical and occasionally verbal clues.  For example, a horse's pinned ears indicate anger, etc.  But in the context of the herd, horses pair off or join specific groups that satisfy their need for emotional support, while avoiding other herd members, perhaps even the herd's dominant male or female.  When separated from a horse with whom they've developed a deep and long lasting relationship, severe depression can ensue and some have been known to lose their will to live.  In what way does that response differ from the human response?  When our complex needs are fulfilled by another person, we too pair off, and we call it love.

In my many years of horse ownership, I have seen my mares show anger, frustration, confusion, jealousy, depression when scolded and what can only be described as affection, devotion, or, dare I say it, love.  There is no doubt in my mind that they are capable of a great range and depth of emotion.  Have you ever seen a mare react to the death of its foal?

We might well say that for as many differences as there are between animals and their human counterparts, there are many fundamental similarities.  Seemingly, love is one of them.


Posted by Loren at 3:35 PM No comments: Links to this post