Really, my wife insisted that I put this poem on the blog.  The idea came to me when I was stopped at a railroad crossing not far from my home on Christmas Eve.  I've always loved trains, perhaps because I was raised near a rail spur in Cincinnati and noisy trains were a part of everyday life.

I saw hobos quite often as a boy and they frequented our yard to pilfer fruit from our apple, plum and pear trees.  And yes, I did press my ear to warm rails and they always spoke to me in a way I could understand.

I remember once putting a coin on the tracks in front of an oncoming engine, all the while hoping the train wouldn't derail.  It didn't!


Crossing
Often I count the cars as they rumble past,
Sometimes only those spoiled by graffiti are numbered.
Today I just sit and watch an oily black engine and its rust-red cars
Flicker by and feel their wash of air on my face.
Hobos jumped from slow moving trains when I was a boy,
dropping down into our yard to peel apples or fill their pockets with pears.
None had much to say. if they spoke at all,
But the rails, silver and straight, were never quiet.
You can ask any boy who ever pressed
A summer ear to a warm rail.
The crossing gate trembles, lifts and the oily black engine and its rust-red cars have gone.
The hiss and jolt of the rails are stilled
And their steel, cold and silent.
Copyright, December 28, 2013 by Loren Schumacher
Well not everything can be about horses, but I promise the next post will be.  Look for a
new post just after the new year.﻿
﻿
Posted by Loren at 6:10 PM 1 comment: 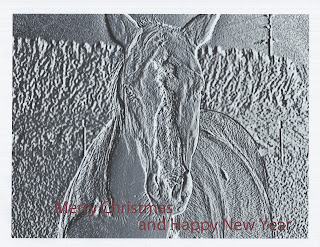 From Stormy, Callie and Me:
Merry Christmas and Happy New Year

This is actually Stormy.
﻿
Posted by Loren at 3:46 PM No comments: