As far as anyone knows, Levi Rosaba was a Washington State Cowboy working at the Denoo Ranch in the early 1900's.  Recently, a picture postcard addressed to someone in Waldo, Wisconsin, and a single yellowed page of what might have been part of a letter or memoir, came into my possession.

I haven't been able to find a definition of the name Rosaba, but my guess is that Rosaba is a derivation of the Italian, Rosalba, which means "white rose."


So here is perhaps all that is left of Levi Rosaba:

There are several things in this photo that caught my eye.  Levi seems to be wearing a cardigan sweater, street shoes and a "pinky" ring on his left hand.  Click on the photo to enlarge it. 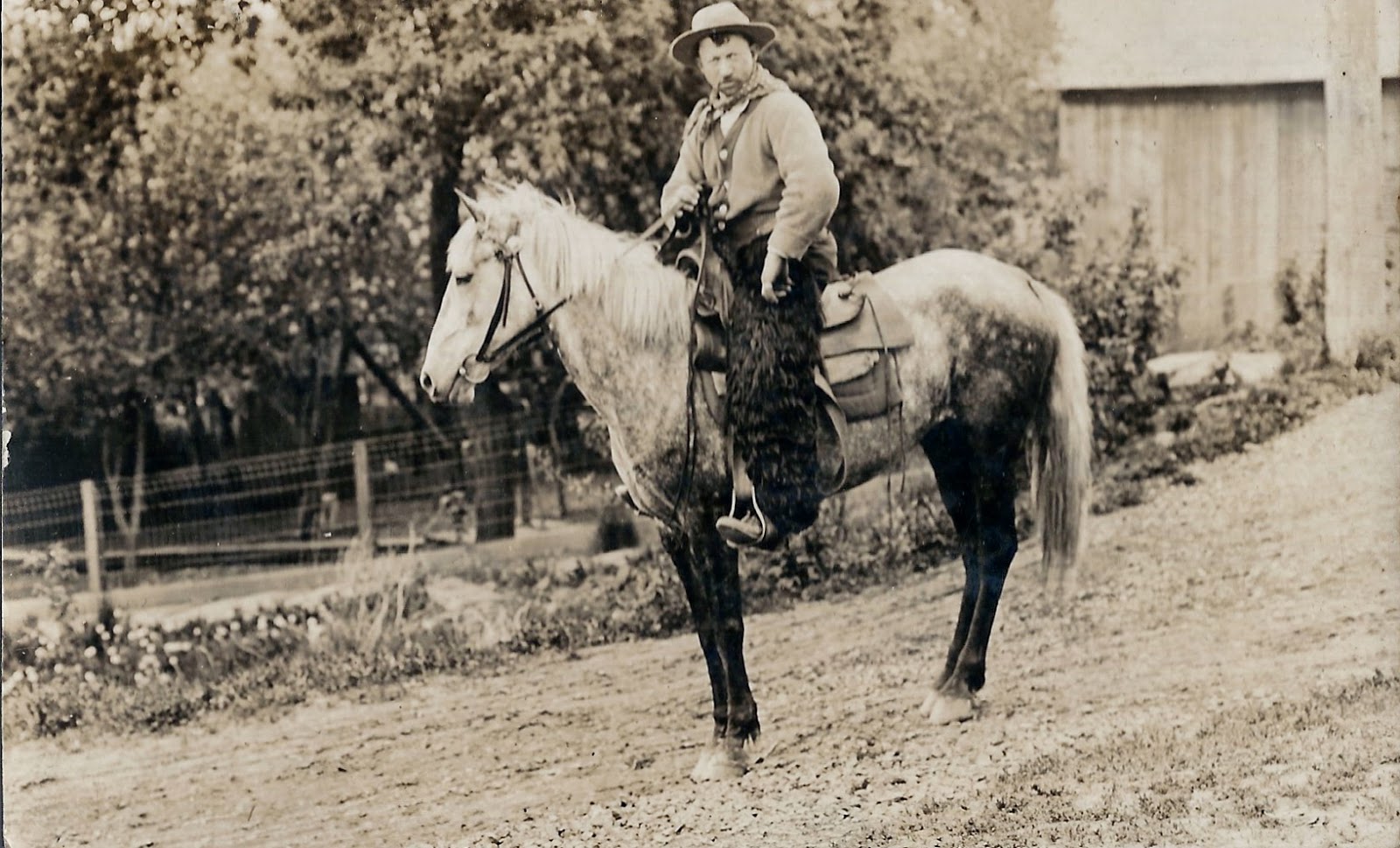 He has a very light touch on the reins of his beautiful dappled grey horse.  The saddle is too large for his horse.  He's used a saddle pad and a blanket to make the saddle fit better, but the saddle still gaps behind Levi's left leg.  And the saddle may be a bit too small for the rider, because no part of the cantle is visible.  Maybe Levi just has a big butt, and it appears that he does.   He also seems to be virtually sitting on the saddle horn.  Things are a little tight in the saddle for Levi to be sure. Much of his equipment dates to the late 1800's, so it is possible that Levi has been a cowboy for some time. 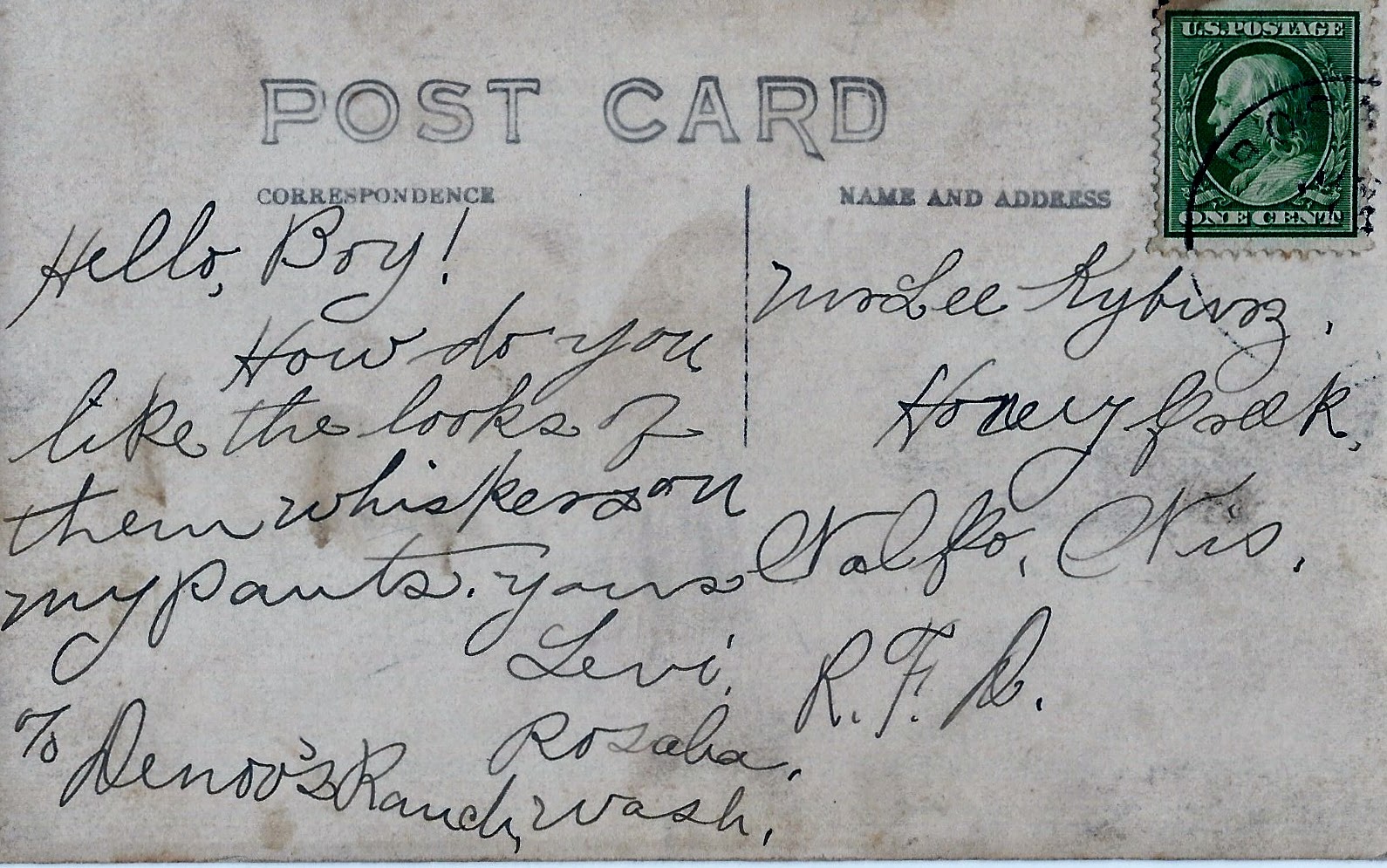 Levi's handwriting leaves a lot to be desired, but he is not uneducated and uses punctuation properly.  He also shows a sense of humor when he calls the hair on his woolies "whiskers."

This postcard was mailed after December of 1908 when the stamp, Scott 331, was printed.  We are looking at a pre-WW I document.

The other document I mentioned has similar handwriting and references the Denoo Ranch in Washington, so it is likely that Levi Rosaba is its author.  Apparently he and another cowboy roped a Grizzly for sport or profit and things got out of hand.  Levi wrote:

"When my first loop missed, the Grizzly, with Joe Hoke's loop still around its neck, made straight for him and his horse, Lickorish (sic).  Lickorish, he was terrified, he stumbled and threw Joe hard. Joe was quick to his feet, but the bear was quicker and crazy to get at him.  He ran over Lickorish and knocked that good horse flat.  And soon enough Hoke disappeared under the Grizzly and made nary another sound.  I guess he was dead in an instant by the look of it.

All the while I levered my Marlin into that bear.  Poco {the dappled grey in the picture?} and me got close enough for me to give that bear five from my Colt, but the job was done and the Griz loped off to lick its wounds or die I guess.  But it did no good, Joe Hoke was dead.

You couldn't figure it was Joe by the look of him, so I wrapped him in his blanket and piled some creek rock on top of him.  I said the few words I know over him, then Poco, me and Lickorish made for the home ranch.  I guess the coyotes and the worms will take care of what's left of Joe.

They was stunned back at the Denoo and all said I didn't do enough to save him.  I did all I could. No one will speak to me and I guess I am about done here."

I've added some punctuation to make this read more smoothly, otherwise it is all Levi.

Posted by Loren at 3:21 PM No comments: Links to this post