It has been quite a while since I've mentioned either of my horses, known collectively as The Girls.  They are getting older and it is hard to believe that fifteen years have passed so quickly.

One of them, Callie, my dark bay paint will be seventeen late this year and most likely had a bout of colic last weekend.  While she didn't evidence some of the classic signs: rolling on the ground or nipping at her sides, she was listless and her quiet eyes were dull and hooded.  There was an 11 p.m. call to our vet who prescribed 10cc of Banamine.  She was some better the next morning, but often stood motionless for long periods, her eyes nearly closed or she napped on what little grass there is in a February pasture.

We put her on half-rations which she largely picked at, so with growing concern, a flurry of text messages passed between my vet and me.  On the second night more Banamine was needed, but I had used all I had the night before.  Thankfully the next option was Previcoxx, an anti-inflammatory, that we keep on hand because of Callie's past Navicular problem.  By late the second day she seemed to come around, hassling her sister Stormy and nuzzling me, looking for comfort.

Stormy (Stormy Monday), soon to turn nineteen, a black and white paint horse, has had her issues in the recent past.  Grossly obese at nearly 1100 pounds and standing just 14.3, she began to limp.  Sensitivity and blood tests showed that she is metabolic, unable to absorb glucose and showing the first signs of laminitis.

Life-style changes were made quickly.  Her activity levels were raised significantly (which she hated).  She was started on  a course of Previcoxx and Isoxsuprine, a combination that relieved the pain in her front feet after just a few days.  And her sweet feed became a memory as we transitioned both horses to a Purina Welsolve LS (low starch) feed, which they loved and devoured, always looking for more.

The last box to be checked was getting Stormy fitted for a grazing muzzle.  I'll save the story of how I got her to accept the muzzle for another day.

Today Stormy is a trim 868 pounds and she looks better than at any time since I've owned her.

So now it's time to introduce, or reintroduce them to you as the case may be, but in a most unusual way.

A friend of my wife's, Cris Fee, is an artist, a fiber artist who creates art quilts that are stunning works and have been exhibited in juried shows throughout the country. Some of her work can be viewed on her website: https://crisfee.com/.  This is her latest: 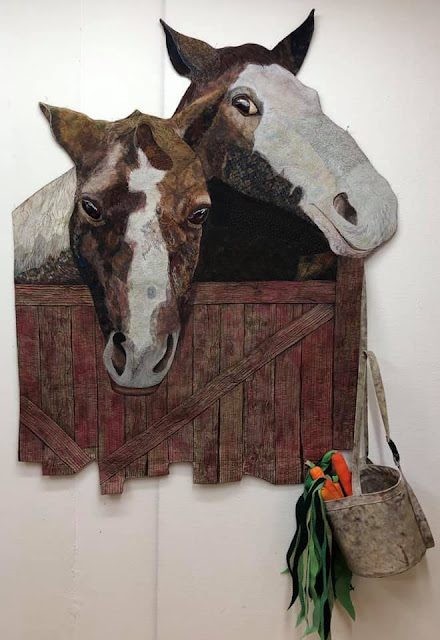 "The Girls" - Stormy on the left and Callie.


Just a few more words about The Girls.  They are friends first and foremost, their likes and dislikes as familiar as my own.  They seek comfort from me when the are scared or uncertain and warn me when things in their world are perceived as a threat.  Sometimes they are lazy and uncooperative and other times playful brats. They give and take on a whim.  Callie, the performance horse, a powerful sweet child, can be guided with just a thought and Stormy, who has tested my leadership for fourteen years and will for another fourteen, I hope.  Her feet barely touch the ground in flight, her tail raised in fluttering salute to her joy in being a horse.

I wouldn't have them any other way.
Posted by Loren at 3:30 PM