Once There Was B. F. Wano

There was baseball, boxing and horse racing.  At the turn of the 20th century they were the big three of American sports.  And clearly the most favored of all was horse racing, particularly harness racing and, specifically, Dan Patch, a natural pacer (both right side legs move, followed by both legs of the left side).

No sports figure of that sport-happy time in America's brief history garnered more ink in the press and more cash at the turnstile.  Twice in his fabled career, Dan Patch drew crowds in excess of 100,000 fans at a reported one U.S. dollar per head.  His name appeared on everything from cut-plug tobacco cans and cigars to washing machines and pool cues.

He traveled in a custom built railcar with his picture appearing on both sides and its interior, they say, was lined in red velvet.  The Jersey Lilly, the famous Lillie Langtry, came to meet him.  President Eisenhower remembered seeing him at the Kansas State Fair in 1904 and Harry Truman sent him a fan letter.  He even had his own pet dog.

So dominating were his performances that often no horse would challenge him and he would pace against the clock.  Dan Patch lost just two heats in his career and never, that is never, lost a race. Fourteen times he broke world speed records and his official record for one mile stands at 1:55-1/4.

At the Minnesota State Fair in 1906 he scorched the track in 1:55 flat, an unofficial record which stood for thirty-two years until matched by Billy Direct in 1938.  It was a four horse race with two of the contenders staying close to Dan, but in the video of the race, both horses seem to have broken and appear to be galloping by the race's end.   It was not until 1960, when Adios Butler paced a mile in 1:54:3, that Dan Patch's unofficial record was broken.

As popular as Standardbred racing had become, no horse approached the fame and popularity of Dan Patch.  He had no peers.  Every other horse raced in his shadow.  They ran at country fairs and tracks in places that have long been forgotten.  Their careers and lives were the definition of anonymity.

B. F. Wano was one such horse.  Not much is known about him. Wano was a trotter (legs move on the diagonal: right front and left rear, etc.) and not a pacer.  Like Dan Patch, Wano was a stallion and for that time big for the breed at 15.3 hands, or just over five feet in height at the withers and weighing about 1100 pounds.  He was powerfully built, muscular and well proportioned, with a short back and very straight legs.  Across his form lay a lustrous, rich brown coat.  Most assuredly all comparisons with Dan Patch end there. 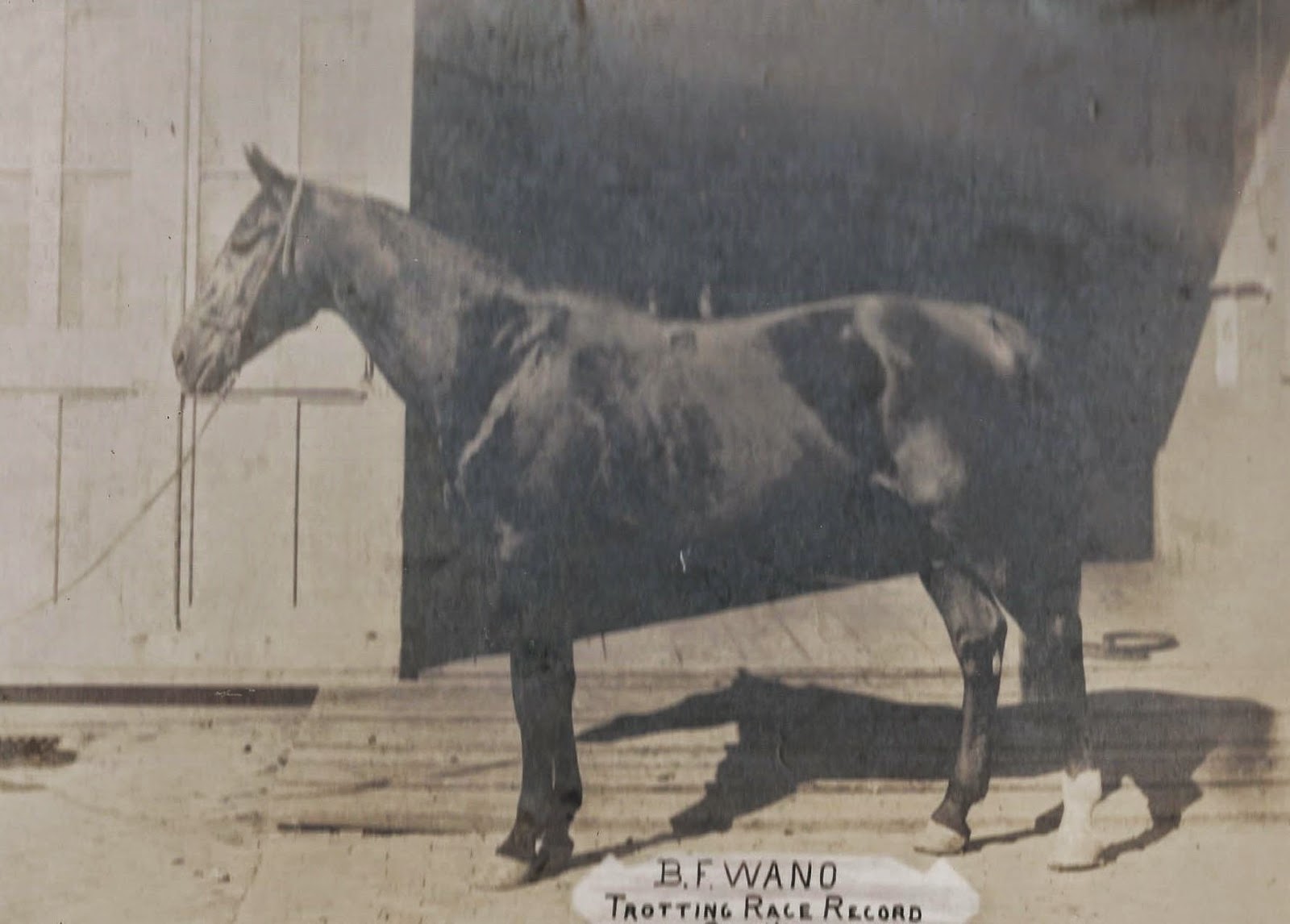 The weather on September 21, 1906 at Ft. Wayne, Indiana was undoubtedly fine as the average temperature for the month was 70.4 degrees, and it must have suited him because in the third heat of the day he set a race record of 2:141/4.  Or did he?  According to a piece used to advertise his availability as a "sure foal getter," he did.  But thanks to Paul Wilder at the Harness Racing Museum and Hall of Fame in Goshen, New York, I learned that he tied the record and did not set it.

The race consisted of 4 heats with Wano finishing second in the first and second heats, first in the third and fourth.  His driver was obscure, someone named Morgan.  For now this is all that is known about B,F. Wano, but on this one day in 1906 he ran his heart out and proved himself to all who watched.

His owner, W. H Stults of Wren, Ohio claimed in his advertising that B. F. Wano had trotted miles in 2:10 and halves in 1:03.  Who knows?  Perhaps Stults engaged in a bit of advertising bombast so common in the early twentieth century when he said that, "In style and action he is perfect," and "his colts are large, with fine style and action."

I was able to find the following about W. H Stults on-line.  This from the Wilshire (Ohio) Herald, May 5, 1904.  "W. H. Stults and J. L. Moser of Wren were Wilshire visitors Saturday afternoon.  The latter is president and the former, cashier of the Bank of Wren.  They are both hustlers, and the leading financiers of their baliwick."  Hustlers?  Mr. Stults later lived in Indiana where the trail ends  - for now.

**My thanks to Jim Miracle for gifting me the photo and artifacts relating to B.F. Wano.  This story would not have been written but for his generosity.

**If anyone has more information concerning B. F.Wano or W.H. Stults, please contact me at pets@leadsandleashes.com.

**Thanks again to Paul Wilder at the Harness Racing Museum and Hall of Fame in Goshen, New York for his help.

The photo of B. F. Wano and the advertising piece sited in the article are from the author's collection.