A Modern Horseman: Part 1 of 2

I think of cowboys and horse trainers as men who are small in stature, light weight and bandy-legged from years spent in the saddle.  Helge, on the other hand, is a big man, perhaps six feet two or three and two hundred twenty pounds or more.  His hands are large with thick fingers that deny the deftness with which he manages a horse's reins.  He walks with the weight of long hours and the rigors of years spent working with horses.

Whenever his truck pulls into our  pasture we joke about the late afternoon heat, exchange horsey small talk and then set about making my horses and me better than we are.  It has been that way for many years now.

I had read in a weekly paper, Farm Week (now Farm World I believe), that a local trainer had successfully trained a zebra.  The zebra possesses a wild and untamed heart that makes them nearly impossible to train, so my curiosity was aroused.  I planned to ask around, hoping someone might know how to reach him.  The person I was searching for was Helge and it turned out that he was more or less the resident clinician at the horse rescue where I bought my first horse, a mare, that I called Wyatt.

Wyatt, like my horse, Callie, was a Canadian PMU mare, and neither more than likely had ever been touched by a human hand until they were forced into a squeeze chute, given several shots and prodded onto a stock trailer for a nineteen hour ride to Lebanon, Ohio. 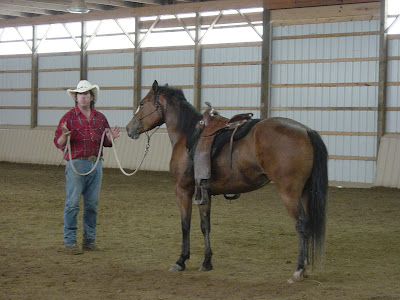 Helge and Wyatt wearing my favorite saddle, a Marciante.

Wyatt wanted nothing to do with humans and when stalled for the first time, she turned her rump toward me, a sign of absolute disrespect and no doubt a little fear.  Within just a few minutes of introducing himself, Helge waded into her stall and after some shuffling of feet and tossing of her head and mane, Wyatt wore her first halter and was being lead to a new life.

Was it magic?  Is Helge a "Horse Whisperer?"  No, he is a modern horseman with a solid understanding of what goes on between a horse's ears and he's willing to do whatever it takes to achieve the desired result.  More importantly, he continues to learn.  Helge has spent some time working with Stacy Westfall and has been mentored by the likes of Richard Winters, both of whom are past winners of the Road To The Horse.  Because of his prominent contacts you might think that Helge is pointing toward a national stage; nothing could be further from the truth.  Why not? Because it would interfere with his life as a family man.  Wife Holly, sons Houston and Holt, are all involved in the business of horse as was Helge's daughter, Hannah, until her marriage.

Horses are a tough business and Helge owns the pain and damage that they can inflict,  He recently dislocated his right shoulder and he has a regularly scheduled appointment for a massage to work out the kinks, the tired muscles, the bruises and injuries that are slower to heal with every passing year. Several years ago my horse, Stormy, kicked Helge and his horse, Thunder, peeling the hide from her rump and delivering a heavy blow to his left knee.  Stormy surrounds herself with a finite hula-hoop of space into which no other horse may enter without her retaliation.  Helge winced, but there were no harsh words, no rebuke.  It was a painful reminder of his profession's dangers.

In our high tech society he is an anachronism, a throwback to another time perhaps, but to the horses and students he teaches and councils, he is the right person for our time.

When I first started working Stormy in the round pen, she began rearing and pawing the air in my direction.  While she's not a big horse she is pretty imposing when balanced on her hind legs. Frankly, I was intimidated and called Helge to ask his advice.  He had no advice, he just said, "I'm on my way, she can't be allowed to get away with this."

He arrived within forty-five minutes or so and immediately began longing Stormy.  To her way of thinking, rearing made me stop interrupting her pleasant afternoon, so it should work with this fellow as well.  As soon as she reared he whacked her hard on the chest with my stiff cue stick.  She reared again and was stung once more with the cue stick.  After a couple of repeat performances she circled the round pen quietly and willingly.  (Let me make it clear that hitting a horse is not a part of Helge's training philosophy, but rather an effective means to defuse a potentially dangerous situation.) Unfortunately she was not so cooperative with me and I had to follow Helge's example by smacking her hard across the chest.

Without straying too far from Helge's story, I can tell you that in a herd setting, horses dispense justice or correction quickly and sometimes painfully.  Flickering ears can become a kick or a bite, nudges become pushes and sometimes, if the message isn't taken to heart, what passes for warfare can take place.  Correcting Stormy with a cue stick was an extension of normal herd behavior.  She was told that her behavior was unacceptable.  She has never held a grudge and she has never reared again. Helge wouldn't accept any payment for his time, not even gas money.

Two years ago I interviewed Helge and what follows in Part Two are some of Helge's thoughts in his own words.

Posted by Loren at 5:08 AM No comments: Links to this post