Who's In Charge Here?

My horse, Stormy, was born in a bad mood.  I'd prove it to you if I could find the pictures I have of her standing by her mother with both ears pinned.  When I find them I'll post them.

As I've often mentioned, Stormy is a dominant mare.  When I bought her ten years ago she could not have been sweeter or more manageable, but the old adage of "green horse and green rider" being a bad combination proved itself, as it always does.

Stormy established herself as the alpha mare by herding Callie all over their pasture.  I, on the other hand, was a little more difficult for her because I didn't respond to her pinned ears; nudges; grunts; cold eyes or the love taps she delivered when the mood struck her.

In the world of the horse you are either a leader or a follower.  If you don't assume the role of herd leader then another horse will.  It is as simple as that and so it was with Stormy and me.

I had carried a 50# bag of feed nearly a quarter of a mile and after unlocking the pasture gate began trudging to our little red stable.  Always curious and hungry, Stormy trotted up with a purpose and began tearing at the bag.  I turned in a circle to my left to keep her away from the bag and as I did she let me have it, kicking me in the right knee.  When you've been kicked by a horse the world stops for a moment while you make sure that nothing has been broken or lacerated, or both.  Angry and hurt, I started chasing her and all the while screaming like a fool.  Having enough of my shenanigans, Stormy kicked me again.  Who's in charge here, I wondered?  Clearly it's not me. 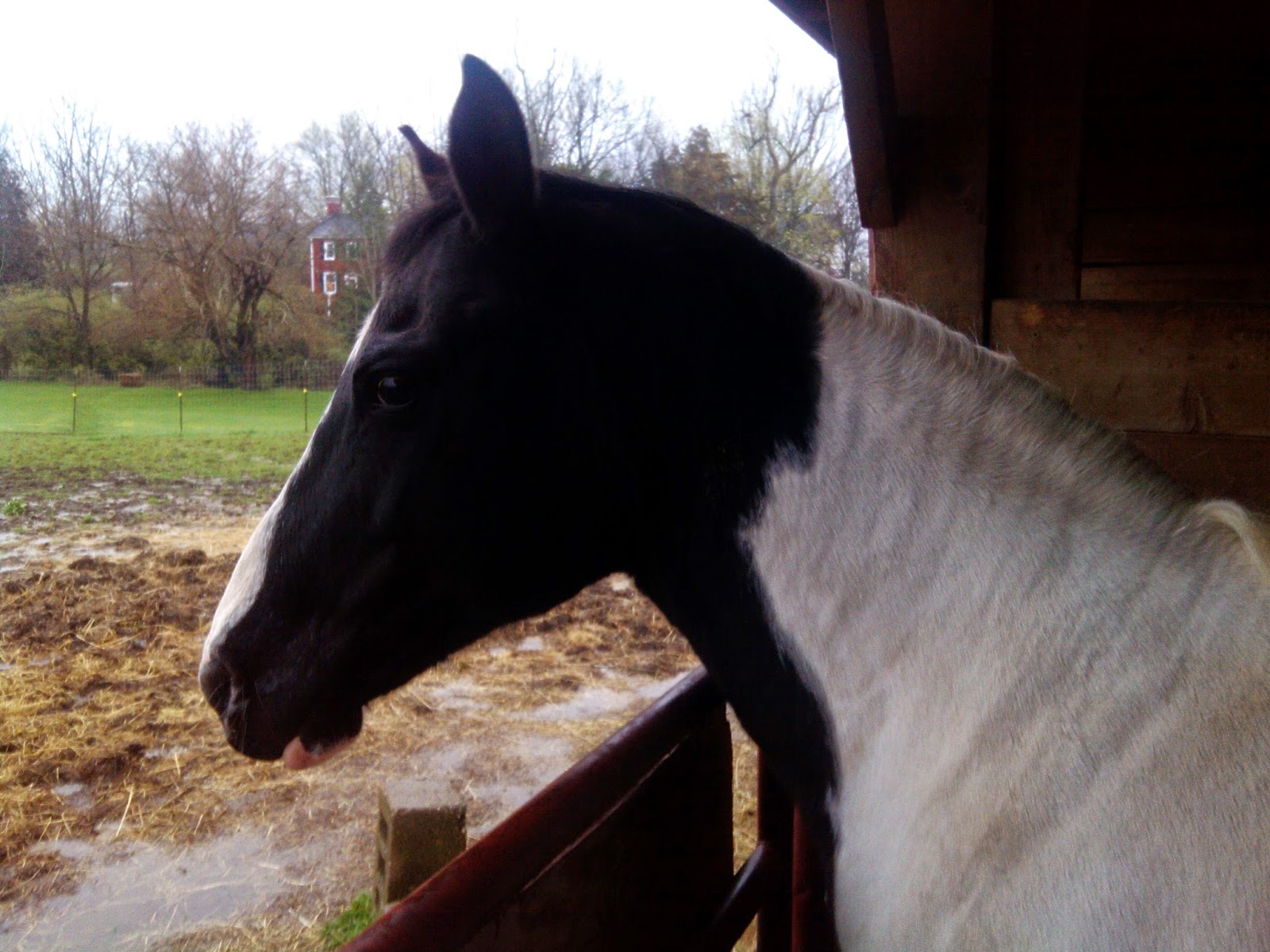 Stormy and I have weathered many storms like the one we're waiting out in this picture.

I found the answer to a growing problem in the first chapter of Jessica Jahiel's book, The Horse Behavior Problem Solver.  "To ask a horse to respect your space, make yourself larger.  Inhale, lift your head and chest, square your shoulders, and raise your arms slightly from your sides."  According to Jessica you have to show a horse that you outrank him or her.

Soon after putting Callie and Stormy in their stalls for the night, I spent a few minutes in front of Stormy's stall pulling rank.  And do you know, it worked, it really did work.  I added a slightly deeper command voice and I could see her begin to chew and hang on every word and gesture.  Crazy, I know, but true.

Here is another picture from my collection of vintage cowboy photographs.  I am always amazed that these pictures have survived for more that a century.  This one is quite old, most likely taken before 1910. 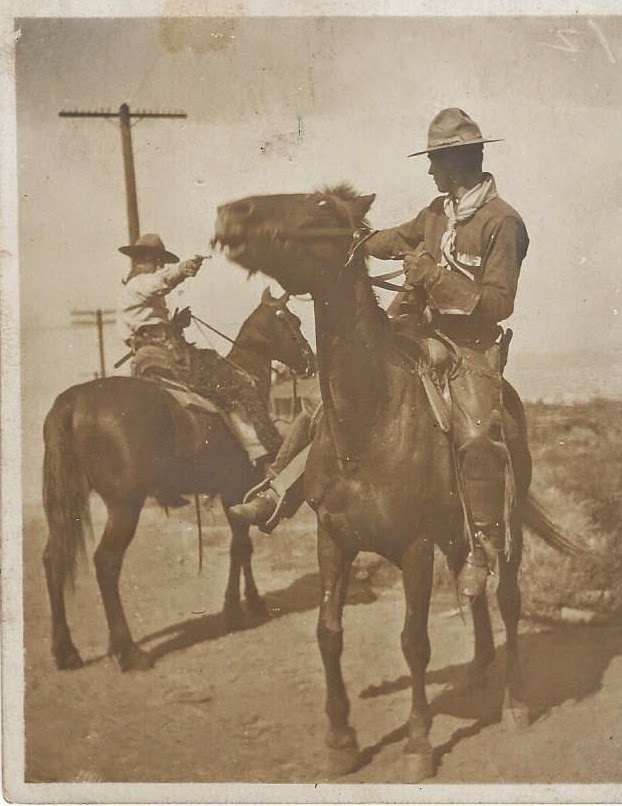 I have never seen a candid picture like this one.  The rider in the background points a small bore pistol at his "friend," who has reined in his horse so abruptly that it throws its head up and, startled, shows the white of its left eye.  His rider is pointing an unseen weapon and the picture clearly shows that he is not smiling.

Both riders wear "Montana Peak " hats, gauntlets with cuffs, and fancy 'glad rags" around their necks.  The rearmost rider wears a pair of "woolie" chaps and the other wears shotgun chaps with a little fringe near the pockets.  This well mounted and well dressed hand is also wearing a pair of boots to die for.  He is not riding a slick-fork kak, or saddle, which is a bit of a surprise.

I thought the telephone poles were a nice touch and by the number of insulators on the cross arms there was a lot of copper wire carrying current somewhere.

On May 10 and 11 I'll be attending a clinic with Dan James of Double Dan Horsemanship.  Dan is Australian and his methods are well respected, so much so, that he has worked extensively in the world of thoroughbreds.  More on all of that later.