The last time my horse trainer, Helge Buflod, was at the farm he mentioned in passing that my horse, Callie, was built for performance.  I asked him in an email to explain and he said,  "Callie's conformation should lend itself to smoothness in all gates.  Her shoulders are nicely sloped.  The length of her back matches her neck and legs and her croup rounds off well.  She looks well balanced to me."  Made me smile, it did. 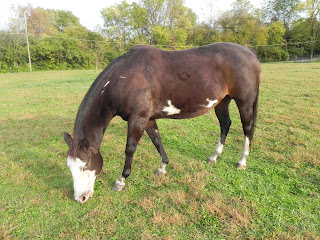 I picked Callie nine years ago as a two year old from a herd of rescued PMU (Pregnant Mare Urine) foals.  I thought she had the most beautiful physique I'd ever seen.  Although she is a registered paint, she  looked for all the world like I imagined a thoroughbred should look with her deep chest, trim muscular hindquarters and a large head atop a powerful neck.  She has been blessed with a kind eye and a matching personality.  Callie's broad bald face sports a single white eyelash. 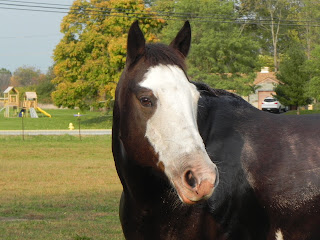 Just after a bath.  Notice the kindness in her eye.

At eleven her sleek dark bay coat still shimmers and stretches across muscles that flex and ripple over bone and blood.  And after a summer on pasture with all its high noon sugar levels, she's heavier than I would like.  Her weight can effect her soundness because of past problems with her deep flexor tendon and thin soles.  I keep her in orthopedic boots which support her frogs and soles when the ground is as dry and hard as it has been for the past three or four weeks.  I let her run barefoot when the earth is soft and moist.  The moisture allows the hoof to soften and flex.  She has not been lame in months and I hope in saying that I haven't jinxed her.

Just thought I'd brag about my girl, Callie, the clown that winds my mare Stormy up and then watches her run herself into a lather, my friend that nudges me playfully whenever the mood strikes, and the smoothest horse I have ever ridden.  My good friend, Callie. 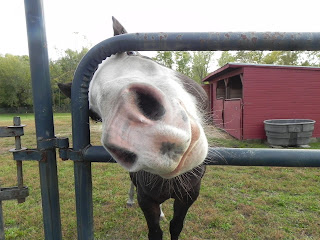 These pictures were taken just after I wrote this entry on September the second. 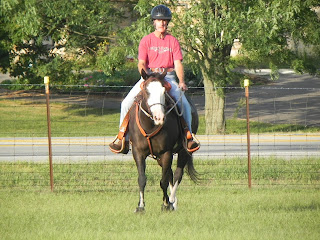 This was Callie's longest and most aggressive workout of the year.  She came through it with flying colors and more importantly....no limp. 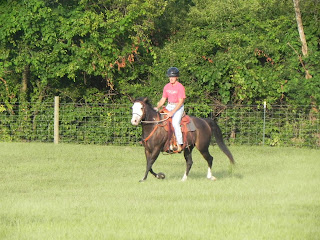 Trotting on a loose rein. 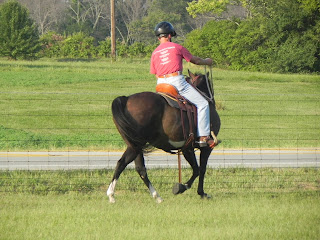 On this half-pass you can see Callie's left hind leg passing under her belly and in front of her right hind leg.  The loose right rein frees her right front shoulder.  You can also see Callie's boots in this one. 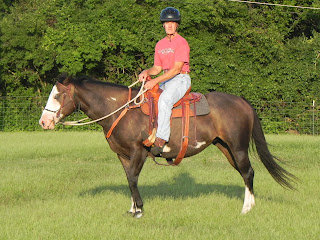 My wife, Carol wanted this one. 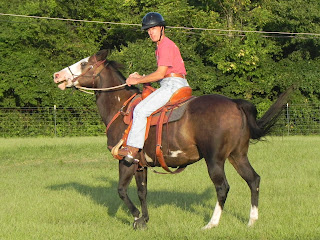 Just a neat photo, but Callie is resisting.  She's "rooting" her nose even though the reins are loose.  She's telling me that she's had enough. Callie has been known to rear when her feet become "stuck," and once in a great while she'll give you a full fledged sky-sweeping buck.  Still, she's a lovely horse and her few bad habits disappear the more I ride her.   Reactions like these are typical when a horse isn't ridden enough.

Just a fun afternoon.  Though hot, the humidity had dropped to a bearable level.  Callie was only wet beneath her saddle and cinch, and that's a very good thing.