On this long ago Fourth of July the United States was a nation of farms, small towns, quiet crossroads, and main streets where businesses, and often people, succeeded or failed on their merits.  There were no bail outs and no social safety nets to fall back upon.

It was a time of high-button shoes, mutton-chop sleeves and dresses that reached nearly to the floor.  Only little girls could wear heat defying short dresses with long stockings.  Men suffered celluloid collars, ties, coats and fedoras even on the hottest days.  Little boys still did mischief and took a lickin' for it, went skinny dippin' and then chased after flag festooned wagons on sweltering July afternoons.

Often the only sounds to be heard were those of birds calling, or hoof beats on hard packed dirt roads, swearing teamsters on cobblestone streets, or the laughter of kids being kids.  So long as you weren't walking behind the plow you might hear music in the jingling brass harness fittings that the horses wore.  The soot streaked, thumping engines of industry were still married to the narrow streets of big cities.


We sometimes stare into space and dreamily imagine ourselves in those romantic days.  We see ourselves at church picnics and ice cream socials, barn dances or drinking sarsaparilla at the corner drugstore, and courting our best girl on a garden swing.

But life was hard, sometimes brutally hard, marked by large families, long days and short lives.  Medicine was "by guess and by golly" and women's sufferage and liberation were far in the future.  But for America, The United States of America, the future was at hand.  It was the time of American possibility and, like Carl Sandburg's "Chicago," we were a nation of the "Big Shoulders."

For the horses, every day was pretty much the same: too much work, too little rest and for most, a life which ended when their usefulness was done.  In large cities horses died in their traces and their bodies were left to rot in the streets.  They were a means to an end, as many chests and broad backs scarred by the whip or harness would attest.  Horses were truly beasts of burden, engines of both commerce and war, as well as the primary means of transportation.  So many horses died during the First World War that many in Europe thought the horse might become extinct.  We know that all of this is true because history tells us so, but I have many photographs in my collection that prove the love and affection people had for their horses, no matter how they were used.  In the golden age of the stern visage, some women allowed a warm, almost maternal smile while standing near or touching the taught, warm skin of their valued co-workers and friends, the horses.


No one knows who the Leasure Brothers were or where they called home, but the photograph shown below from the 1890's assures us that they lived, and were patriotic.
"Our Prices Tell," the little sign in the wagon's middle reads.  What their prices said, we're not sure!

The horse's coats and harness shine and let us know that even in the Gay 90's, image was important.  Their ears tell us that the band in the wagon behind them must be playing a tune.  The conductor sits next to the driver and wears a white pith helmet and what can only be described as a garish suit of white squares on what seem to be trousers striped like the American flag.  We can see a fiddler and a double bass player on board as well, and I suspect the little boys following the wagon might be picking up pieces of candy thrown by the man standing in the rear.

Further to the right, a man in a straw boater and his daughter in a knee length dress and wide brimmed straw hat stand near a group of gossiping ladies in their long dresses.
He seems bemused at best and distracted at worst.  Perhaps his thoughts lean more toward a cool beer, clicking billiard balls, and the blue smoke of a dollar cigar.  We can never know.

Left of the horses is a man is forever caught in mid-step, his collar stud is fastened and his rolled brim slouch hat is pulled low over his eyes.  He is a working man, a man that on this bright, warm day also wears a coat.  To his right a man sits in the shade of his buggies convertible top, his horse is resting, and while its ears are alert, its head is held low.

On the farm the nation's birth was celebrated as well, but with a little less fanfare.  An older, Roman nosed plow horse does its patriotic double duty as a saddle horse and photo prop for two laughing children from a different time.  While it was unusual for adults to smile in pictures these two barefoot kids rejoiced in the moment and waved the flag.  The were the hope of the American Century, our century.

Much has changed since these photographs were taken: we live longer and in an urban society, and medicine, communication and transportation are far better.  Still, we are not the young, cock-sure, vibrant America of our past.  Too oftern we wait for the government to do for us what we can and should do for ourselves.  The curves in a country road make the journey interesting, yet in our zeal to be protected form every danger, we demand that the road be straightened and the adventure siphoned away like old oil.

Our country has more than its share of problems to be sure, but we still have the "Big Shoulders" and we should remember that.  This is still the greatest country on earth, and today, we celebrate her birth.

Copyright, July 3, 2012
All photos from the author's collection 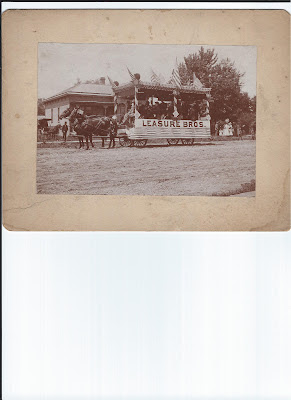 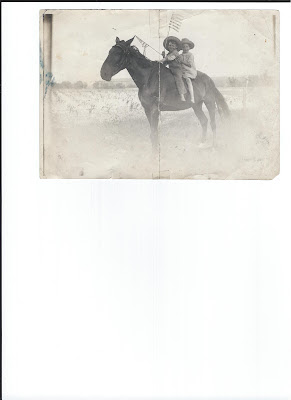