The Perfect Racehorse: A final visit with Holy Bull

Life has been extraordinarily busy for the past few months and I have had very little time to write, so I hope you will enjoy the reprise of my story about Holy Bull which ran in the on-line magazine, Horse Network, earlier this year.  There is new content coming.

The stallion barn at Darley's Jonabell Farm was drowsy and still except for the droning of fans mounted over each stall door.  Most of the stallions were dozing in the early June warmth, or searching listlessly for wayward bits of hay that remained from their morning feeding.

2016 Kentucky Derby winner Nyquist stood in the deepest shadows of his stall, as Medaglia d'Oro, stunningly large and perpetually anti-social, slouched with only his backside visible.  Frosted, "too smart for his own good," is rowdy and playful in a juvenile way.  And the magnificent Bernardini searches your soul with his placid kind eyes. 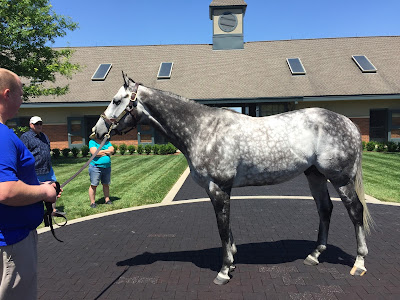 Frosted, "too smart for his own good."

But it is Holy Bull, the barn's elder statesman pensioned in 2012, who stands largely unnoticed in a corner stall near the door.  He is framed in the white light of the early Bluegrass summer, and at 26 still commands attention.  I knew very little about him other than his attention-grabbing name. 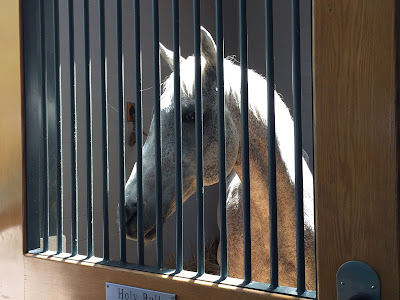 The video images of he Haskell, the Travers Stakes, the Met Mile and the Florida Derby are grainy and time worn, like our memories of him.  Each is a blurred testament to the greatness of the horse, Holy Bull.  Tom Durkin's call of the 1994 Woodward still echoes down the years, "Holy Bull running like a champion...with devastating ease!  Holy Bull toying with the best horses in training."  His time, just 3/5 of a second off the stakes record set by the legendary Secretariat.

At the Travers he was tested early by the rabbit, Comanche Trail, while D. Wayne Lukas' Tabasco Cat watched and waited.  But as long, fluid strides brought the closer Concern to Holy Bull, the gray horse found a last fragment of courage under the relentless rhythm of Mike Smith's left-hand.  Winning by a neck, Tom Durkin said of Holy Bull, "What a hero."

In 1994 he was the Eclipse Champion Three Year Old and Horse of the Year, and ultimately was elected to racing's Hall of Fame.  President of Godolphin USA, Jimmy Bell, once owner of Jonabell Farm, said of Holy Bull, "I've always said he wasn't a specialist - short, grass, long or dirt.  You can't mention his name without using words like fighter, determination and guts."

Winning 12 of his 16 starts (12 of his first 14, among them 6 GI and 3 GII races) and collecting nearly $2.5 million in career earnings, he proved equally adept at single turn races, like the Hutcheson Stakes or the Met Mile, as he was in route races.  But his career was not without failure and disappointment.  The odds-on favorite to win the 1994 Kentucky Derby, The Bull finished a dismal 12th behind Go For Gin.  To the end of his days, trainer Jimmy Croll said that someone had "gotten to" Holy Bull before the Derby.  His long time rider, Mike Smith to this day fails to come up with an explanation.  In the Fountain of Youth Stakes, a displaced palate left The Bull Gasping for breath, and finishing sixth.

Skeptics opined that he was just a sprinter, but after his decisive Florida Derby victory (.46 flat for the 1/2 and a mile and an eighth in 1:47 2/5) there was little room for speculation or doubt.  Hall of Fame trainer Jimmy Croll said, "After the race he cooled out in 15 minutes and was screaming for his dinner.  He cleaned out every oat and the following morning he was bright as the sun."

For most of the 1995 Donn Handicap, it was a match race between The Bull and Cigar.  The Bull  was gaining ground on Cigar, when Mike Smith felt something off and pulled him up.  It was a career-ending ligament injury, and The Bull was retired to Jonabell Farm.

In his career as a sire he gave us a Derby winner Giacomo, as well as Macho Uno, the winner of  the 2000  Breeder's Cup Juvenile and descendants such as the undefeated Caravaggio, Judy The Beauty and Munnings.  In all, Holy Bull;; gave racing more than 700 winners with earnings totaling more than $60 million. 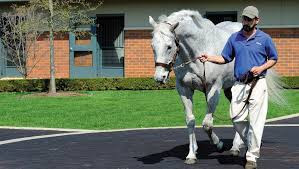 These are the facts, brittle statistical validation of Holy Bull's greatness.  But it is the heart of Holy Bull and others like him that statistics alone cannot define.  Puncher and counter puncher, he was a fighter that refused to lose.  Even when pushed to the limit, dogged by first one challenger then another, Holy Bull seemed to glide across the surface as though he were out for a Sunday hack.  He ran with deceptive ease, but each stride was a demonstration of his power, thunderous, devastating and violent. 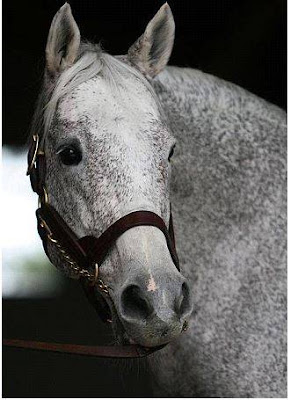 On that day in early June (2017) he seemed a bit restive, his head swaying back and forth as if the movement comforted him and relieved the boredom of the day's confinement.  His eyes were soft and warm, at times a little vacant as if he were lost in thought.  His ears reacted to the sounds of his small world, at times nearly flat and mulish, then pricked and alert.  And his coat, once a steely dark gray, was now a mantle of white, still dappled and with a fine silken mane.  He was beautiful.

Just five days later on June the 7th, at the age of 26, Holy Bull was euthanized due to the infirmities of old age.  Surely he went to his death in much the same way he raced - with courage and dignity.  You would expect nothing less from him.

I have nearly two dozen photos taken of him on that warm Friday afternoon, none of them very good, but they are among the last - perhaps the very last - photos taken of Holy Bull. 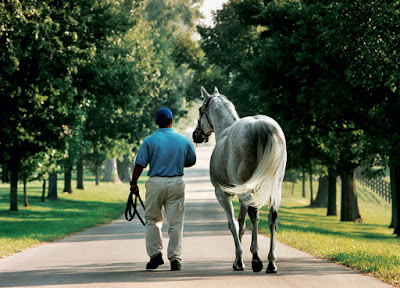 Post Script:   I was touched to have seen Holy Bull in his last days, and perhaps I will think of him in my last days and face their end with his courage.  I choose to believe that the light in which he stood that day was the light of Heaven as it opened to receive him.  I could be wrong, but I don't think so.

Posted by Loren at 5:21 PM No comments: Links to this post