Sugar Is Sweet: A Little About Wyatt

As a two year old my first horse, Wyatt, a filly, already had a deep chest and powerful, rounded quarter horse haunches.  She was an unregistered bay, possibly a quarter/draft horse cross with a wide irregular blaze on her long face.  Whenever she came near, the other horses in the paddock gave way to Wyatt and the smallish dark bay paint with a bald face that shadowed her.  So dominant was she that the herd scattered even when their meager rations were dumped on the ground.  When Wyatt ate the little dark bay ate too. 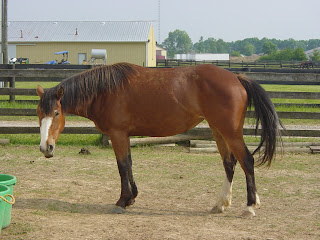 Wyatt on the day, June 6, 2004 a 90+ degree day, that we bought her.
My wife, Carol, and I picked Wyatt and the little dark bay that became our horse, Callie, from among a restless herd of PMU  (Pregnant Mare Urine) fillies trucked nineteen hours from Manitoba to Ohio.  Premarin, a compound of estrogens, is derived from pregnant mare's urine and is used to treat postmenopausal symptoms,  The foals of these mares become a liability unless they can be sold to slaughter, auctioned or purchased by "rescue" operations as Wyatt and Callie had been.  While we may have saved Wyatt's life, it quickly became clear that she was a herd animal first and always. Callie on the left and Wyatt in the center.  All three horses just isolated from the herd had been given a mountain of hay.  Callie obviously needed it.
Wyatt was restless and indifferent toward humans.  She performed lifelessly when longed and in the round pen would canter as if on autopilot, never looking in my direction.  She'd had virtually no contact with humans in her northern Manitoba home, so Wyatt was nearly as wild and untamed as any Mustang.  Our friend Kelly summed up the feelings of most of the barn staff when she said, "There are very few horses that I don't like, but Wyatt is one of them.  Someone just needs to ride the piss out of her until she straightens up."  But our investment in Wyatt slowly began to pay dividends, still, there were just a couple of things she seemed to really enjoy: the company of another horse and peppermints! 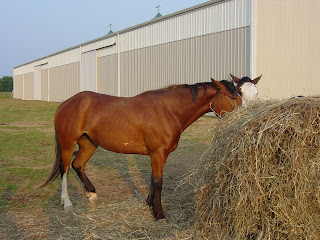 Once a horse was purchased it got all of the food it could eat. Wyatt, Callie and the hay pile.
One dark and rainy (really, it was!) October evening, Carol, Kelly and I took Wyatt into the barn's aisle to continue desensitizing her to my weight.  I was draped across her back, head down, rubbing her flanks and feeling her stagger under my weight when one of the barn regulars, a man, walked up, and without asking plopped a spearmint candy into Wyatt's mouth.  I saved my rant about barn manners and not feeding someone else's horse without first asking for the car ride home.
Not knowing this gentleman well, the conversation was strained, and soon the lapses in our talk grew uncomfortably long.  Saying, "See ya later," he left us.  As he disappeared down the aisle, Wyatt raised her head, and looking over her left shoulder, watched the receding figure intently.  After pausing to look at each one of us in turn, she dropped her head and let the spearmint candy slip from her mouth.  It fell to the concrete floor with a plastic click.  I'm sure that Wyatt was doing the horse equivalent of "ich" when she craned her neck as horses will, curled her upper lip, and snorted wetly.  I fished in my pocket and found what she was looking for, a peppermint.  While Wyatt crunched happily, the three of us were still laughing. 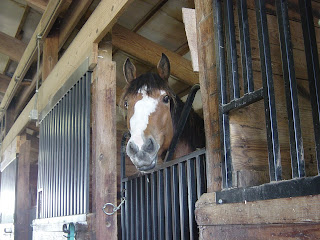 I love this picture and loved Wyatt, but... 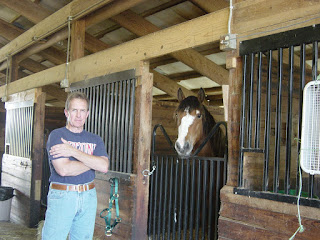