This is a story the Cincinnati Enquirer printed in its Saturday, May 27, 2017 edition.  The article read:

New York - Kentucky Derby winner Classic Empire will Skip the Belmont Stakes next month after finishing eighth in the Preakness.

Trainer Todd Pletcher says the 3-year-old will be pointed toward either the $600,000 Jim Dandy at Saratoga on July 29 or the $1 million Haskell Invitational at Monmouth on July 30, according to the Daily Racing Form.

Trainer Chad Brown says he will wait until after the Memorial Day weekend to announce where Preakness winner Cloud Computing will run next.  However, it appears likely that he will run in the Belmont.

The Cincinnati Enquirer began as the Cincinnati Commercial in the mid-1800's and survived the shake-out of our two afternoon daily newspapers, The Cincinnati Post and The Cincinnati Times Star. It was a proud newspaper with a great tradition and a conservative editorial board.  But with the advent of online resources the Enquirer, like many other newspapers, began cutting costs to make up for lost revenue and increased costs.  The Enquirer isn't even printed in Cincinnati anymore, it is printed in Columbus and is now owned by the USA Today group.

The paper staggers beneath the weight of change, but never is its decline more evident than in the quality of its editing.  There are grammatical and syntax errors and this unedited news wire story makes you wonder about the accuracy of stories that are of substantially more significance than this
collection of misbegotten prose.

So I wrote the following email to Jason Hoffman, the sports editor.

Of course by now you know that it was Always Dreaming who won the Kentucky Derby and not Classic Empire as reported in today's Enquirer.  Over the past several years I have been disappointed by the quality of editing at the Enquirer.  This egregious error is just another reason why newspapers straddle a fine line between relevance and obsolescence.  It makes no difference that the blurb about Classic Empire and the Belmont may have been sourced from the Associated Press, the error should have been caught.

As a writer of articles that primarily deal with horses and horse racing, I am always careful to make certain my facts are in order, and I have an editor that demands that accuracy.  We rely on you to bring us sports news that is accurate and not merely laughable.

And in all fairness I have to report the presence of egg on my face, because in my haste to dash off this email to Mr. Hoffman,  I typed "...Always Dreaming who one," when I meant Always Dreaming who "won" the Kentucky Derby.  lol.

By the way, The Enquirer did not respond to my email. 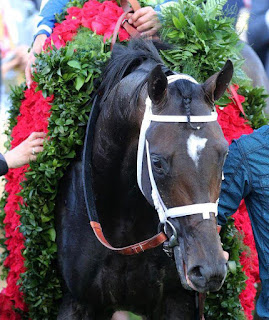 Wearing the symbol of his Kentucky Derby win, Always Dreaming.

Copyright June 6, 2017 by Loren Schumacher
Photo copyrights belong to the photographers
Derby Winner Classic Empire skipping Belmont by the Associated Press and published by The Cincinnati Enquirer on May 37, 2017

Posted by Loren at 5:34 PM No comments: Links to this post