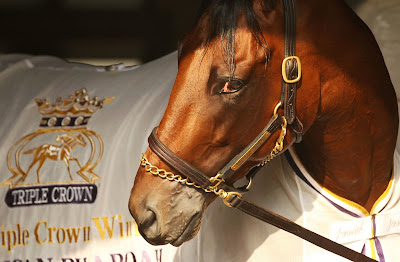 I've fallen under the spell of American Pharoah. The computer advises me that it doesn't recognize that spelling of Pharaoh and for my information and edification has underlined Pharoah in bright red, the color of a ripe cayenne pepper.

Pharoah has proven his courage in a desperate finish at the Kentucky Derby, as a mudder at Pimlico and as a Champion with his stunning victory at the mile and a half graveyard of Triple Crown contenders, The Belmont.  He has been the subject of professional doubt, but his performances have given his detractors reason to reconsider.   He is not invincible, he may yet have a bad day at the races, but for now let's celebrate and enjoy him.  He won't be ours for that much longer.

The  Haskell  Invitational at Monmouth Park (8/2/15) , hard by the Jersey shore, could have been a trap race, a race where an under prepared or tired champion might dull the luster of his recent achievements.  Just 57 days removed from his stunning victory at the mile and a half Belmont, one could almost anticipate a letdown, perhaps a meltdown.  Even Secretariat lost two races after winning the Triple Crown.

Trainer Bob Baffert, who truly seems to be humbled by American Pharoah's ability, said that the horse was a little amped in the paddock and he knew the pace would be fast.  And the speed came with the ringing of a bell and the clanging of an opening starting gate.  Hall of Fame jockey Mike Smith's horse, Competitive Edge, racing two turns for the first time, broke smartly and took the lead as expected with American Pharoah stalking him about a length behind and Mr Jordan, another speed horse, just behind him. 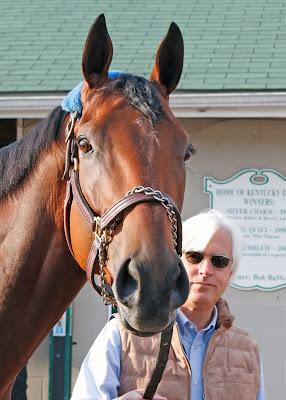 The first quarter was run in 23.1 and the half in 46 seconds flat.  Mr Jordan, unable to stand the pace, fell back rapidly, finishing last, while American Pharoah inched closer to the leader.  Watching the replay of the race one can see that Pharoah simply is not working as hard as Competitive Edge and that the moment, the denouement, would come very soon.  Half way through the far turn, never raising his whip hand, jockey Victor Espinoza, who had held American Pharoah in check to that point, simply let the great horse go.  Dropping Competitive Edge by five lengths with just a few of his elegant ground eating strides, Espinoza hand-rode American Pharoah to an easy 2-1/4 length victory, just a tick slower than the track record for a mile and one-eighth, ahead of fast closing long-shot, Keen Ice and third place finisher Upstart. 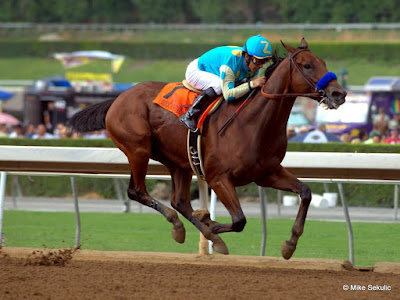 The margin of victory is deceiving because Expinoza, riding high in the saddle, was clearly saving his horse for the rigors of what must surely come, The Breeder's Cup Classic. So dominant was his performance that American Pharoah became only the tenth horse in history to run a mile and an eighth in less than 1:48 - and did it while being pulled up. 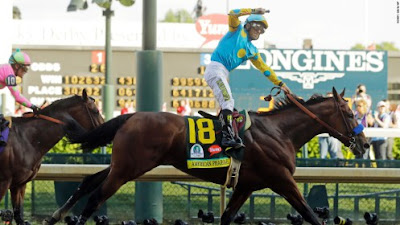 The Asbury Park Press headline put it best: Total Domination: American Pharoah wows everybody in the Haskell.  The article's author, Steven Falk, quotes jockey Victor Espinoza, "He (American Pharoah) is always a champion.  That's why he won the Triple Crown and (Sunday) he showed it again."

History will remember the misspelling of Pharoah as little more than an interesting factoid, an aberration, perhaps a mood lightening giggle in the high stakes game of thoroughbred breeding and racing.  His racing career will end in October and he will be shipped to Coolmore Ashford Stud in Kentucky, where a bevy of willing and some unwilling maidens await his pleasure and the racing community will stand in line to spend its cash on his first crop of foals.

It will be a sad thing to watch him be led away, The cheering will fade and the throngs will move on to the next greatest thing.  In that moment he will begin a kind of falling away.  There will be those who will compare him to Citation or Seattle Slew, even Secretariat, but American Pharoah can only be compared to those who raced against him, then followed him across a finish line. 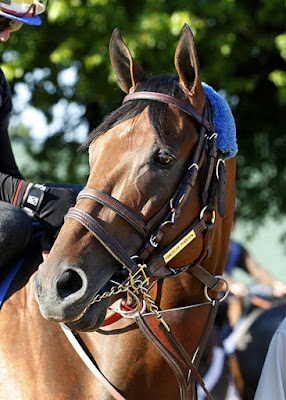 Copyright August 6, 2015 by Loren Schumacher
All photos in the public domain
**Another version of this story appeared in HorseCollaborative.com 8/7/15


Posted by Loren at 8:48 AM No comments: Links to this post