Once again that tired cliche, I am so, so sorry, proves to be not nearly enough.

I suppose there is some perverse irony in the death of the four year old filly, Pramedya, after breaking her left front cannon bone racing on the turf course at Pimlico on Saturday.  Her owners, Gretchen and Roy Jackson also bred the talented Barbaro.  Barbaro broke down during the 2006 Preakness and was euthanized some ten months later in January 2007.  The only picture of Pramedya that I could find was of her in the final minutes of her tragic life, her front legs folded beneath her as she tried to remain standing.  Soon she would be dead.  I would not and could not include that photo.  Her jockey, Daniel Centeno, broke his collarbone in the fall, but he will live to race again.

In the first race on Saturday's card, nine year old gelding Homeboykris (in his sixty-fourth start) won, reaching, straining and racing to the end.  A digital photo was snapped in the winner's circle, there were smiles all around, and during the walk to his stall, Homeboykris collapsed and died of an apparent heart attack.  Stretching irony still further, Honeboykris'  body was sent for a necropsy to be performed at the same hospital that treated Barbaro.   Homeboykris was a graded stakes winner, winning the 2009 Champagne Stakes Gr.1, and he finished tenth in the 2010 Kentucky Derby.  In sixty-four starts he won more than $500,000.  His record: 14 wins, 10 seconds and 5 third place finishes.  His grandsire was Derby winner Fusaichi Pegasus.  His blood was a champion's.

In a recent report The Jockey Club showed that fatal injuries dropped to 1.62 per 1000 starts in 2015 from 1.89 per 1000 starts in 2014.  Horse racing is that rare sport in which the principal participants regularly suffer catastrophic injuries resulting in their death.  Nonetheless we cannot look away. Racing's efforts to police itself and to burnish its image can never completely erase the revulsion that follows calamitous injury to or tragic death of a horse.  I can only think of automobile racing as the sport which most closely parallels horse racing.  We will watch a spectacular, firey crash replayed countless time and remain more or less unmoved, yet the thought of a suffering animal shreds our emotions.  Only the most callous among us remains unmoved.

If you don't believe me, just look at the headline of The Cincinnati Enquirer for Monday. May 30, 2016:  Community saddened by killing of gorilla at Zoo.  A four year old boy somehow managed to elude his parents and all of the safeguards surrounding the gorilla exhibit at the Cincinnati Zoo.  He fell into a moat and was rescued by a 17 year old western lowland gorilla named Harambe.  The zoo's emergency response team, in order to save the child from a life-threatening situation, was forced to kill Harambe.  The story was reported worldwide. resulting in intense responses that included charging the parents with neglect to a petition to make  an incident that results in the death of an endangered species a crime with which the parent might be charged.  A vigil for Harambe was held at the zoo's main entrance on the afternoon of May 30. 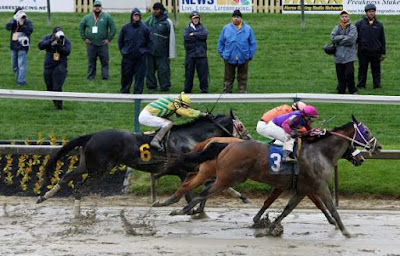 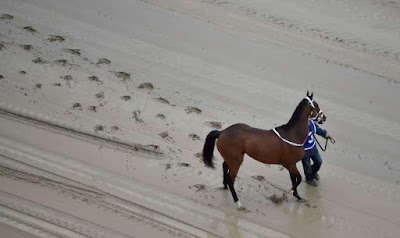 The rains came and took up residence, but without the fury of the storm that overtook the Preakness in 2015, when American Pharoah left his mark on the second leg of the Triple Crown.

It is difficult to look at these magnificent animals, born to run, born to thrill us with their brilliant speed, to endear themselves to us with their quirks and antics and still denigrate their quality.  Yet that is exactly what has happened in 2016.  More than one expert has opined that this year's crop of three year old colts is not up to the quality of last years three year old contenders.  Perhaps.  After all, a clock never lies, though sometimes results will and ( tongue in cheek here) experts are never wrong.

Although a pall had been cast over the day, all was not doom and gloom, because there was still the annual infield bikini contest.  I've seen the photos, they stand in line for this.  And the girls do too. 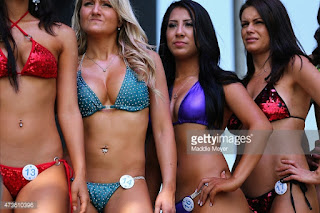 Take that Kentucky Derby.  Number 14 just may have had a wedgy.

Nyquist entering the Preakness with eight consecutive wins ( including four G1 races ), was the betting public's favorite at 3-5, with second choice Exaggerator at 3-1.  Although beaten on four occasions by Nyquist, Exaggerator's breathless closing in the Derby gave the faithful something to hang their hats upon. 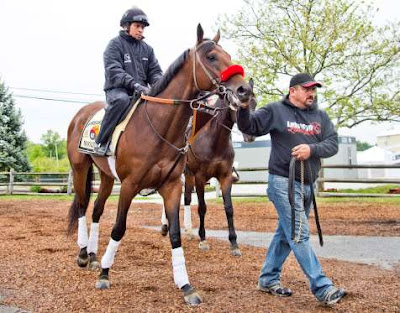 Nyquist training with Emir Cedeno up.

Exaggerator's trainer and Hall of Fame jockey Kent Desormeaux's older brother, Keith said, "We respect what he (Nyquist) has done, but we're hopeful of turning the tables."

Breaking from the third post position, Nyquist and Uncle Lino sprinted the first quarter in 22.38, the fastest in Preakness history, and blistered the half in 46.56.  Whether the result of a shaky strategy or a rush of adrenaline, jockey Mario Gutierrez dogged the speed horse Uncle Lino.  Trading the lead by fractions on the back stretch, race viewers were treated to a classic duel while Exaggerator trailed the leaders by as much as 13 lengths.  The leaders flew rather than slogged across the waterlogged track surface and began the run to glory. 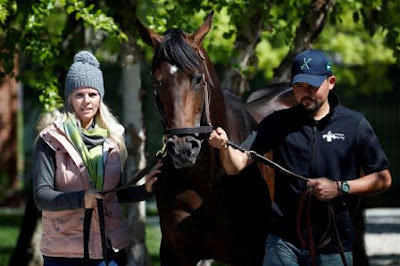 Exaggerator after schooling at Pimlico.  The young woman is Keith Desormeaux's girlfriend and assistant, Julie Clark.  Clark says of Exaggerator, " It would be nice to have a little bit of a break from him sometimes, because he is always on his toes and squealing around..."

The stretch run was too much for the speedy Uncle Lino who began to fade, ultimately finishing seventh.  Desormeaux said, "To me it looked like Nyquist was trying to establish an outward position, maybe in the four path. And Exaggertor just kind of slid up the fence to the far turn where I actually got to slow him down and say 'whenever I'm ready.'" 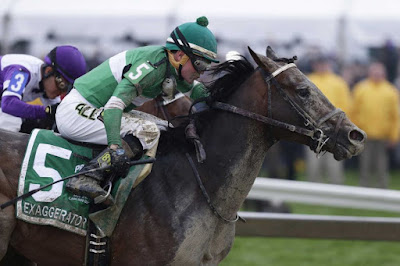 Exaggerator's experience in adverse conditions in the Santa Anita Derby were crucial, but it was Kent Desormeaux's experience at Pimlico that may have been the deciding factor.  Having won two prior Preakness contests he added, "I had a dream trip today.  I was on the fence and they stayed wide.  These turns you want to paint the fence.  We did, they did not, and not for nothing, knowledge is power." 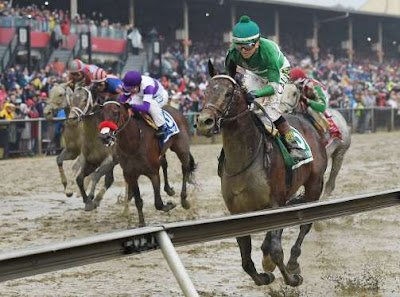 From 13 lengths back, Exxagerator wins.  Nyquist in Purple and eventual runner-up, Cherry Wine
in the red cap.
﻿

The story of the race seemed to be Exaggerator's charge from 13 or more lengths off the pace, but watching the race replay, Cherry Wine ran down the pack from even further back in the field, painting the hedge much as the winner had.  A classy, gutty performance by the grey son of Paddy O'Prado.

An anonymous gambler plunked down $80,000 on Stradivari to win, making the fourth place finisher the favorite for nearly two hours.  As I finish this piece on July 26, Stradivari is recovering from surgery to repair a condylar fracture and an axial fracture of a sesamoid in his right front foreleg, suffered as he galloped out after breezing with Belmont runner-up, Destin, at Saratoga on July 22.  Stradivari will never race again, but he is alive and that is all that matters 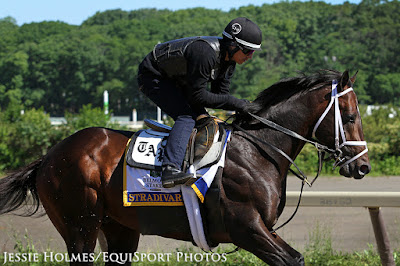 After the Preakness it was announced that Nyquist had suffered another bout of the same mystery fever that sidelined him after the Florida derby.  With a fever of 102 plus and a high white cell count, he was pulled from The Belmont to be run on June 11.  All of which serves to remind us of the Triple Crown's difficulty and American Pharoah's greatness as he remained sound throughout that grueling pursuit of history and how he thrilled us all as he took it in his stride. 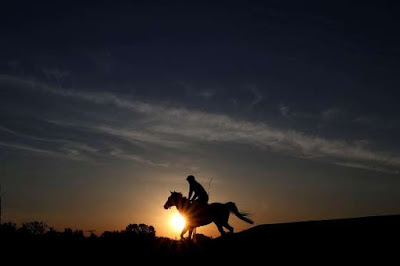 Racetrack morning, this one at Pimlico.