Hoping to satisfy the hunger that rattles in their stomachs, they amble, unconcerned, onto US 191 stopping traffic, their ribs showing, their eyes hollow and empty.  They are homeless gypsies: paints, palominos, red bays, roans, duns and blacks.  Their groups are small in number.  The colts are vital and spirited, alert and quick, not yet broken by hunger and the experience of relentless heat, thirst and privation.  There is no one to inoculate them, float their teeth or trim their hooves.  Hell, there is no money to feed them, let alone money for health care. Still the young ones move with an elasticity and grace that is missing in the adults.  Their prancing, mincing youth dams up the pity you would otherwise feel for them all. 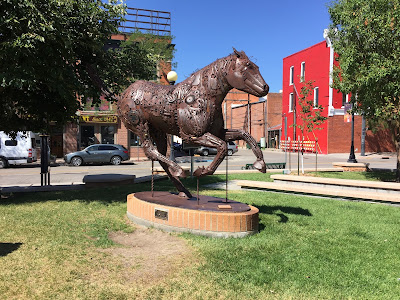 The only horse I was able to photograph, this one in Cheyenne, Wyoming, truly a one horse town.
﻿
﻿
In addition to 37,903 families in Navajo land, there are 37,008 motor vehicles and 35,000 horses, nearly one per family!   Perhaps horses remain a deep reservoir of pride for the Navajo as evidence of affluence, masculinity or even currency.  Poverty is everywhere, inescapable, in your face, loud and damning, yet nearly every home or trailer, ramshackle or otherwise has a horse.  Usually they are confined to grassless paddocks so small that a canter would be nearly impossible even if there were just one horse.  It is not unusual to see two or more confined to a small area without shade.  But more importantly, I think the horses  provide a source of pleasure, escape, competition and balance a razor thin existence with laughter and smiles.  I say this because I lost track of the number of rodeo arenas that I saw.  The horse remains important to the average Navajo.

This is Chinle, Arizona, the heart of the Navajo reservation, where hope seems lost in a flickering memory that is ancient and in conflict with Burger King and the buzzing and beeping of cell phones. Chinle is about government entities, both Federal (Bureau of Land Management ), the Bureau of Indian Affairs and Navajo.  Tough tribal police, high crime rates and a serious drug problem have filled the large juvenile correction facility on Indian Road 7.

What drives the crime rate?  A youthful population that averages 24 years of age.  40% of all Navajo live below the poverty line with a median family income of just $22,000.00.  32% have no complete plumbing, 60% are without phones and 54% of those aged 25 and older are without a high school or higher education.  The reservation is an incubator of discontent, acting out and crime.  All of these facts and figures are compounded by the fact that the youth have no interest in the values and traditions of the Navajo.  I was told that fewer and fewer speak the native language. 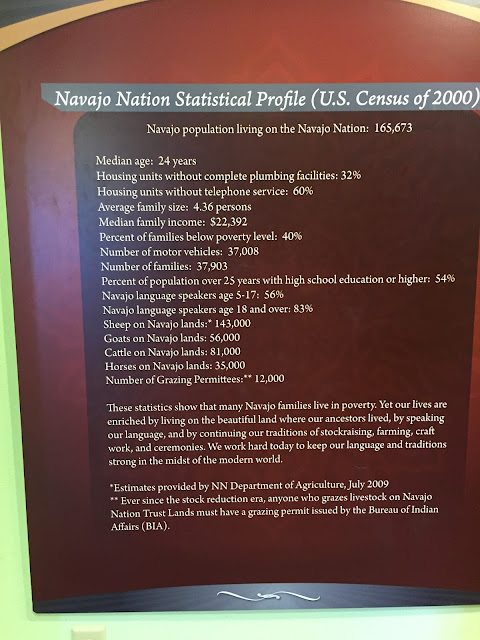 ﻿
The plight of the Navajo and I'll wager most native Americans, has not changed a great deal in the sixteen years since these stats were collected.  It is an embarrassment and we should be ashamed.

﻿
﻿
In the quiet of nearby Canyon de Chelly (pronounced Shay) the past and its ancient traditions hang by a slender thread in the hands of the few Navajo who tend their cattle, sheep and sparse gardens of beans, squash and corn ( the three sisters of Puebloan culture ) there.  This national park is unique in that it is populated, although sparsely, by Indians living on ancestral lands, the titles for which stretch into antiquity. 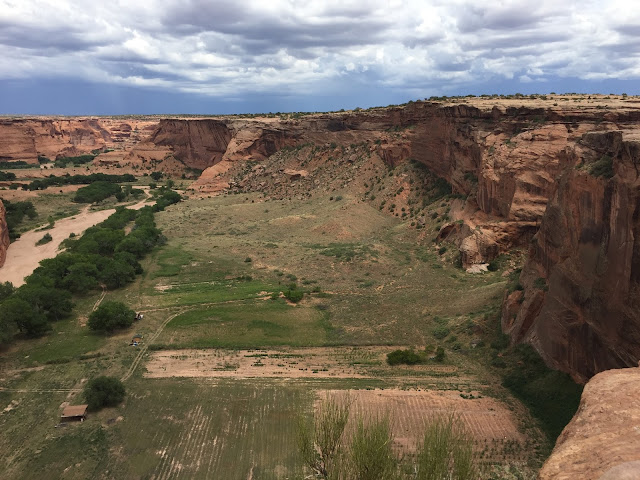 The August gardens at the bottom of the canyon.  Chinle Wash to the left beyond the trees.

﻿
﻿
Canyon de Chelly's solitude is broken by the raspy voice of circling Ravens, and the lowing of cattle in the canyon depths below.  There is only one hike in the park that can be done without a park ranger or Indian guide and that is the trail that leads to the White House ruins wedged into a cliff wall crevice 600 feet below the canyon's rim.  Why can I hike to White House and nowhere else without a guide?  Because these ruins are not Navajo.  The ruins date from 750 to 1300 and were built by ancestral Puebloans.  Although the Navajo, who call themselves Dine', say they have always lived here, they actually date from about 1700, after the Hopi left the canyon.

The hike, just 2.5 miles, descends a trail dotted with long stretches of slick-rock and laced with so many switch backs that the route seems as though it were stitched by a surgeon.  Dropping down onto the trail, I was struck by gnarled and twisted sandstone, burnished red and blasted smooth, wrinkled like an ancient skin over millions of years.  Where the slick-rock sloped away from the cliff  toward a fall no one could survive, I put a hand on the cliff wall to give me the courage that was at the moment lacking.  I am not crazy about high places. 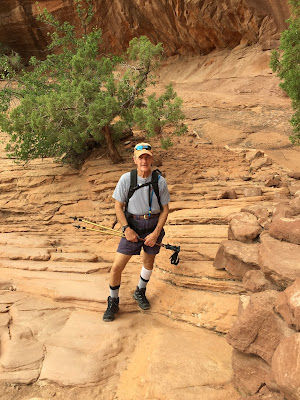 ﻿
A fellow traveler took this photo of me on the trail.
﻿
The 600 foot descent took about forty minutes and passing through a short tunnel I stepped into the onset of evening on the canyon floor. After I snapped a photo of the Navajo Hogan ( a building used in many traditional rituals and found nearly everywhere on the reservation ) just beyond a fence, I noticed a small sign that read: No Pictures. It should have read, "This place, this land and our ways are sacred to us.  Respect them."

The sandy bottom of Chinle Wash, which wanders for miles, made the hike to the ruins slow and heavy.  Rain slicked the surrounding cliffs, turning them from a powdery red to a slate grey color.

After the descent, a long sandy trek across the flat, then a short climb up a rise marked by cholla cactus (pronounced choya), the ruins appeared in a niche some 8o feet or more above the canyon floor. A phalanx of grazing cattle, one with well developed forward pointing horns...a female by the way, stood between me and the ruins.  I didn't stop for a selfie, but taking a deep breath walked between them and made the last hundred yards to the ruins.  ﻿

Indians selling jewelry in Arizona is not unusual, but I was surprised to see Navajo selling goods from a couple of card tables under a tree just in front of the ruins and more surprised that they had gotten to the bottom of the canyon in cars! 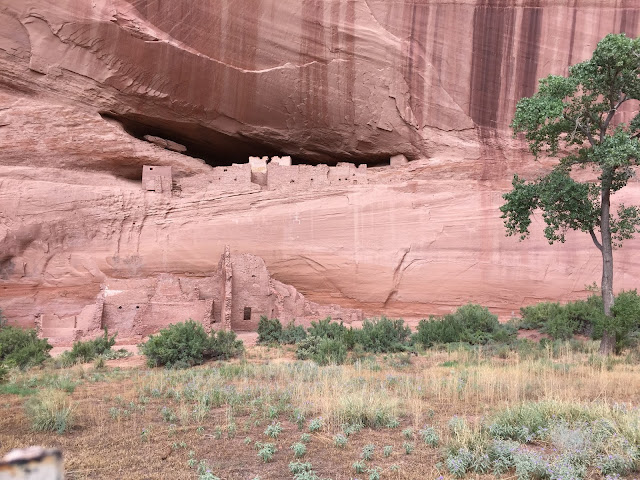 The White House ruins in Canyon de Chelley.  Click on the picture to enlarge it and you can see the pictograph.
I once stood  under a natural overhang like the one in this picture, but one much, much smaller.  Little taller than me and perhaps no more than 8 feet deep and no more than 15 feet in length, it was once home to a family.  The ceiling was blackened from the open fires used to heat and cook and I could place my finger tips over theirs in places where they had plastered the ceiling of their sandstone home.  It was literally a hole in the wall.  There was no evidence of the engineering I saw in the ruins high above the canyon's floor in front of me.  It was the definition of primitive, just a rocky place in the Arizona desert, but it was a home.
I couldn't reach the White House ruins, a chain link fence kept visitors like me far enough away so that the worst among us could not plunder or damage them.  If you knew how much I wanted to find the worn moqui steps in the wall above the dwelling on the canyon floor, and trusting my balance and nerve, climb to the uppermost dwellings and explore them.  Just a few minutes alone with them, to share their view of the world and to wonder what drove them to live this way and in the end, to vanish.  There is no written language and there are few if any answers.
Still these people reach out to us sharing their dreams, their gods or their fears in pictographs.  There is no Rosetta Stone to help us interpret their drawings.  There are as many meanings as eyes to see their work.  If you look closely at the picture of the ruins and count over five windows from the right, there is a large pictograph on the wall, big enough to be seen from a hundred yards and across 700 years.
Copyright September 8, 2016 by Loren R. Schumacher
﻿
﻿
Posted by Loren at 4:41 PM