And so the poignant lyrics of Dan Fogleberg's song, Run For The Roses, go.  They speak to us in an oddly melancholy way, because during Derby week, chance meets opportunity in perhaps the most famous, if not the richest horse race in the world.

At Churchill Downs excess breathes excitement. While private jets sit wing tip to wing tip and nose to tail at the local airport, thousands pay $300.00 each to swelter in the noonday sun while they party on, dancing, drinking or sleeping off a colossal hangover, only to rise like the Phoenix to party again. The infield is so crowded that few if any will actually see the race.  Most will watch on huge screens posted variously among them.

But if you have $12,000.00, you may spend the afternoon seated in air-conditioned comfort high above the race course on the grandstand's topmost floor, enjoying much of what money and privilege offer and allow.


There are other diversions though.  Hats so grotesque that they are no less than a milliner's nightmare. 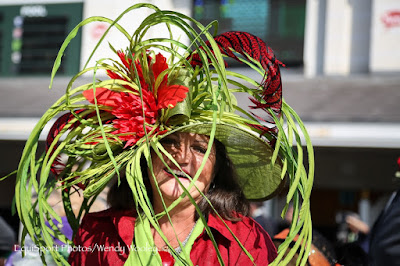 It takes some moxy to wear this little number.

To walk among the throng of race goers is to be treated to a movable feast of fashion the likes of which you have seldom, if ever, seen.  Coiffed, barbered and dressed to the nines, men and women strut their finest, often without regard for taste.  Taste, well, just take a take a gander at the great skier Lindsey Vonn's ensemble. 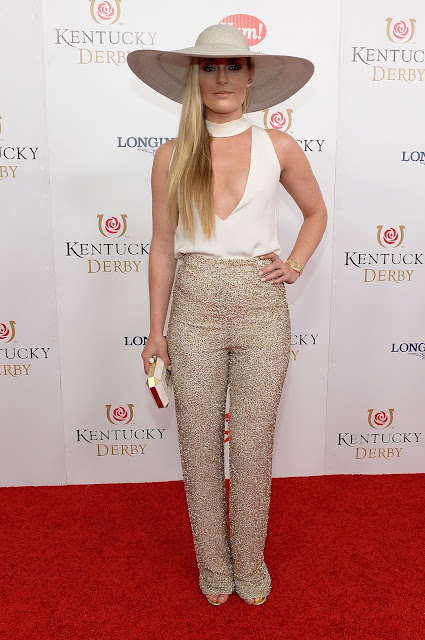 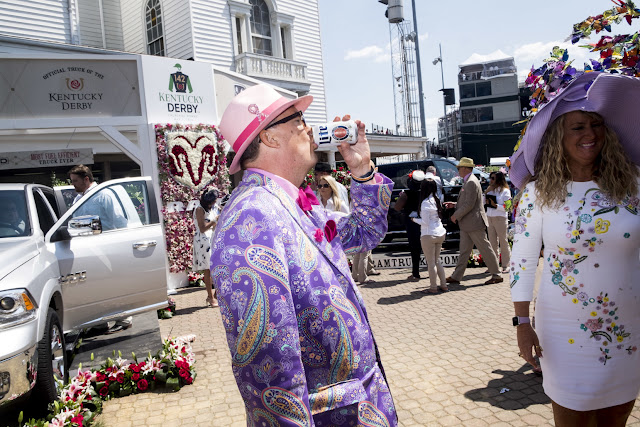 A believer in equal opportunity, this gentlemen joins in the fun.  And the beer.

And don't forget the ubiquitous and vile tasting Mint Julep.  Here is one of many recipes for making the classic Derby Mint Julep:

The run to the first Saturday in May began 56 million years ago, when the dawn horse, the tiny Eohippus appeared in what would become The United States.  The horse's appearance marked the beginning of and proliferation of life as we know it.  Prolific, the early horse quickly spread, perhaps across the land bridge to Asia, Africa and Europe.  Millions of years passed and for reasons yet unknown, the horse disappeared from the American landscape, reappearing in the sixteenth century with the arrival of the Spanish conquerors.

Long prior to their reintroduction to the Americas, horses, because of their speed and grace, made racing a sport on the steppes of Asia, in the sylvan settings of Europe and the sands of North Africa.  It remains so today.

I often compare the Kentucky Derby to the circus.  We tolerate the hideous clowns, the men on stilts and the souvenir hawkers, while waiting, scarcely breathing, for lumbering elephants to appear and finally, the lions and tigers, who though caged, bring us to the edges of our seats in anticipation of a disaster that might befall the lion tamer. 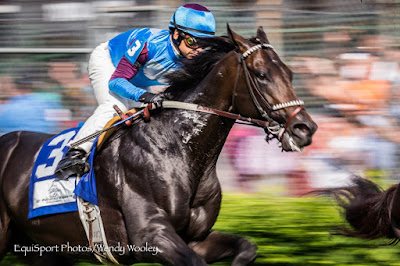 ﻿
Just one look at this animal and you understand why we love them so much.
Cathryn Sophia made her mark early in Derby Week by biting her groom in the stomach and knocking him out of her stall.  She was a bargain priced yearling filly (Street Boss x Sheave x Mineshaft), just $30,000.   She provided a pretty substantial  return on investment in her 2-3/4 length victory over Land Over Sea in the 1-1/8 mile G1 Longines Kentucky Oaks on Friday.   The purse: $1,000,000.  ﻿ 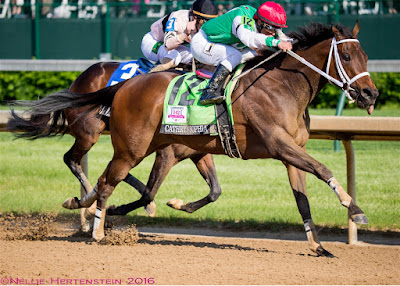 The brat: Cathryn Sophia, in the Kentucky Oaks.
Her trainer, John Servis, said, "She's not crazy, she's just mean.  She's not like that really out of the stall, but when you're in her stall, that's her stall."  See what I mean about the circus coming to town.﻿ 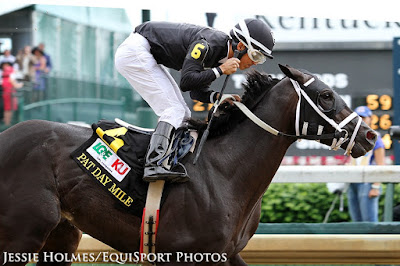 On the Derby undercard, Sharpe Azteca, winner of the G3 Pat Day Mile.
My vote for the best turned out horse of the entire card.
Nyquist's glittering record of seven consecutive wins, especially his trouncing of archrival Mohaymen in the Florida Derby, did little to add to his luster in the public eye.  How does American Pharoah capture the public fancy and Nyquist, on paper more accomplished than AP, does not?  Nyquist has won "over four race tracks covering the East Coast, the West Coast and Kentucky.  He has won on the lead and from off the pace.  He has overcome trouble out of the gate and forced to go wide."  There is just no explaining the presence, the grace, or magic of American Pharoah.  Nyquist, the talented workman, or AP and his ballet on four flashing hooves. The public has clearly made its choice.
Breaking well from stall thirteen, Nyquist showing early speed, was throttled back by jockey Mario Gutierrez, allowing speedster, Danzing Candy, to assume the lead at the first turn.
At the head of the stretch, Nyquist running outside and out of trouble along with Gun Runner, overhauled the tiring Danzing Candy.  Gun Runner "pricking his ears back and forth at the top of the stretch," assumed the lead briefly before Nyquist rallied in top gear, speeding to the finish line ahead of a desperate charge under the whip of Kent Desormeaux, by the luckless Exxagerator. 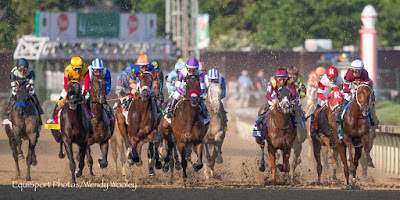 The Derby stretch drive.  Nyquist, center, with red shadow roll.
﻿
﻿
﻿
﻿
﻿
The winning time: 2:01.31 before the Derby's second largest crowd of over 167,000.  And the finish was just the way the public bet them: Nyquist, Exxagerator, Gun Runner (my choice) and Mohaymen.
For Exxagerator and the Desormeaux brothers, now 0 for 4 against Nyquist, its back to the drawing board.  Perhaps they will stay closer to the pace in the Preakness.  Seems the only thing to do.  And what of Mohaymen, a son of Tapit?  The gritty Gun Runner?  Who knows?  The racing gods do.
And the tents were folded and shipped off in the night and somewhere a tiny Eohippus, the dawn horse, raises its head, offers a soft nicker and resumes its grazing.
﻿
﻿
** My apologies, the centering and spacing are off and I am unable to correct them for some reason unknown to me.