Carol and I, like most of you, work like dogs to earn a few days vacation each year,and a trip to Paradise, Grand Cayman, seemed the right place to decompress.  We're fortunate to have come here to the island several times and while the weather has been iffy, it is still a beautiful, restful and peaceful place.

We have been diving on the windward, east side, where the seas roll and tumble into deep boat-pitching troughs that have produced rock-me-in-your arms surge and a bit of sea sickness in me.  Most of the dives have a 100' profile for 40 minutes and then back to the boat and on board...if you can.

The west side along Seven Mile Beach is more commercial and tourist driven, but diving with
the Don Foster Dive operation is as good as it can get. 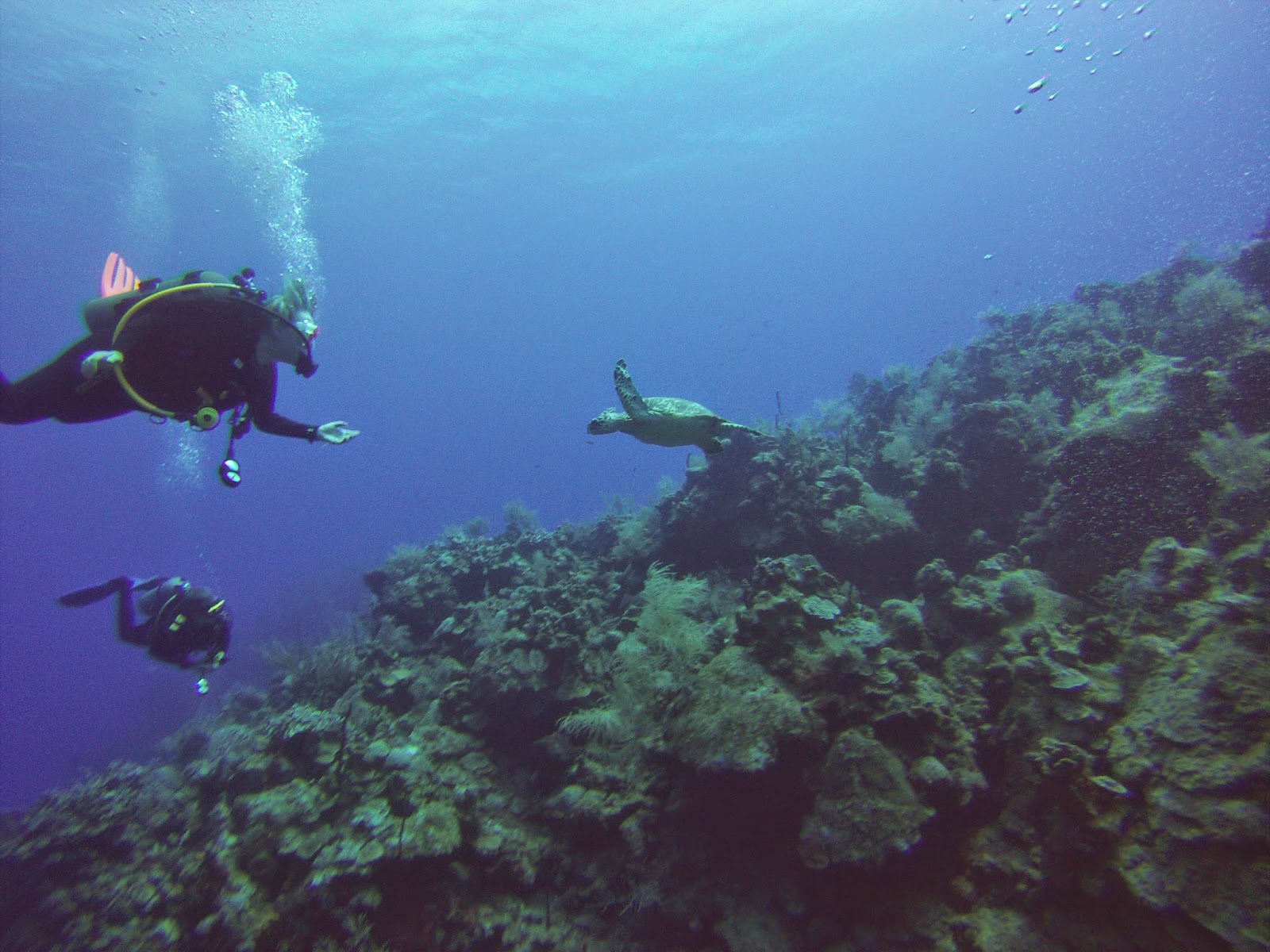 Carol and me with a green turtle.

The reef on the west side is a little used up in places but still beautiful.  Best of all, the dive ops have done a great job keeping the predator Lion Fish at bay.  We understand that they have taken over the Bahamian reefs and as a result, the tropical fish population has declined.  The local predators don't yet see the Lion Fish as prey to be taken.  Too bad, we have always loved diving there.

Enough talk.  Most of the following pictures were taken by our friend, Howard Farr, with his GoPro camera, some by Carol and me. 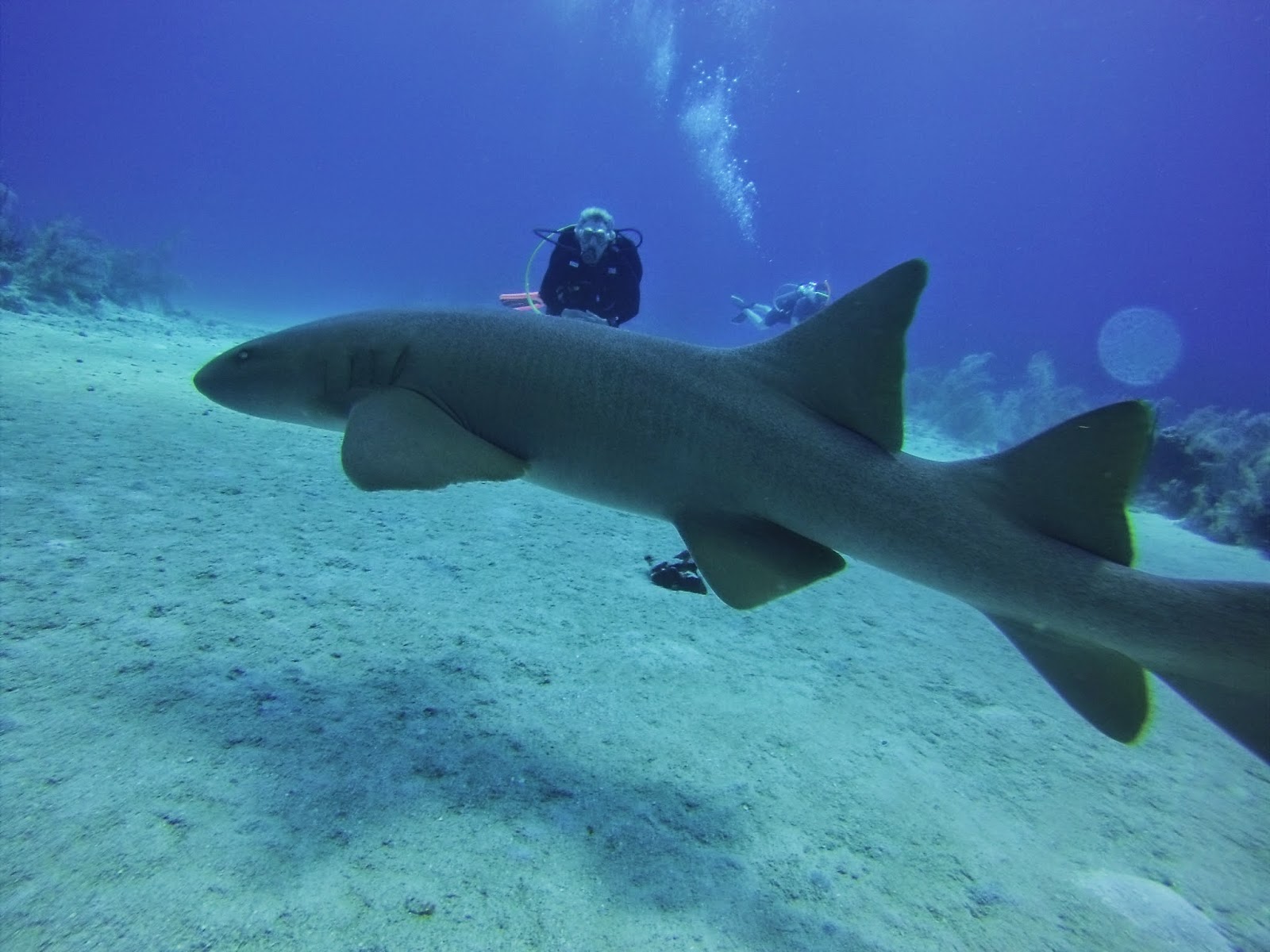 A great shot of a Nurse Shark with Carol watching closely.  Nurse sharks are usually found on the bottom and are not normally aggressive,
﻿ 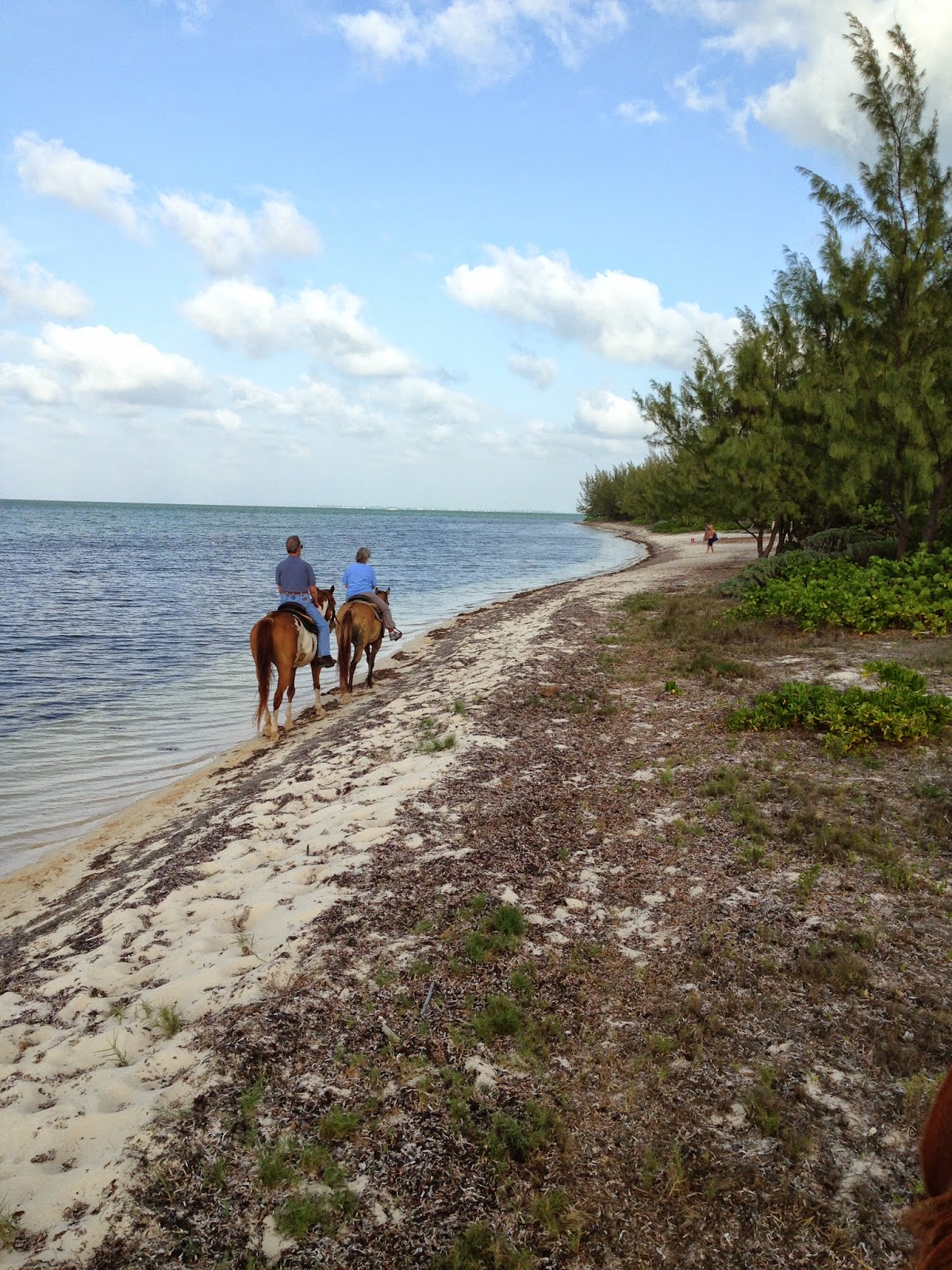 Sunset on Baker's Beach.  Just Carol, me and our guide and camera man, Mike. 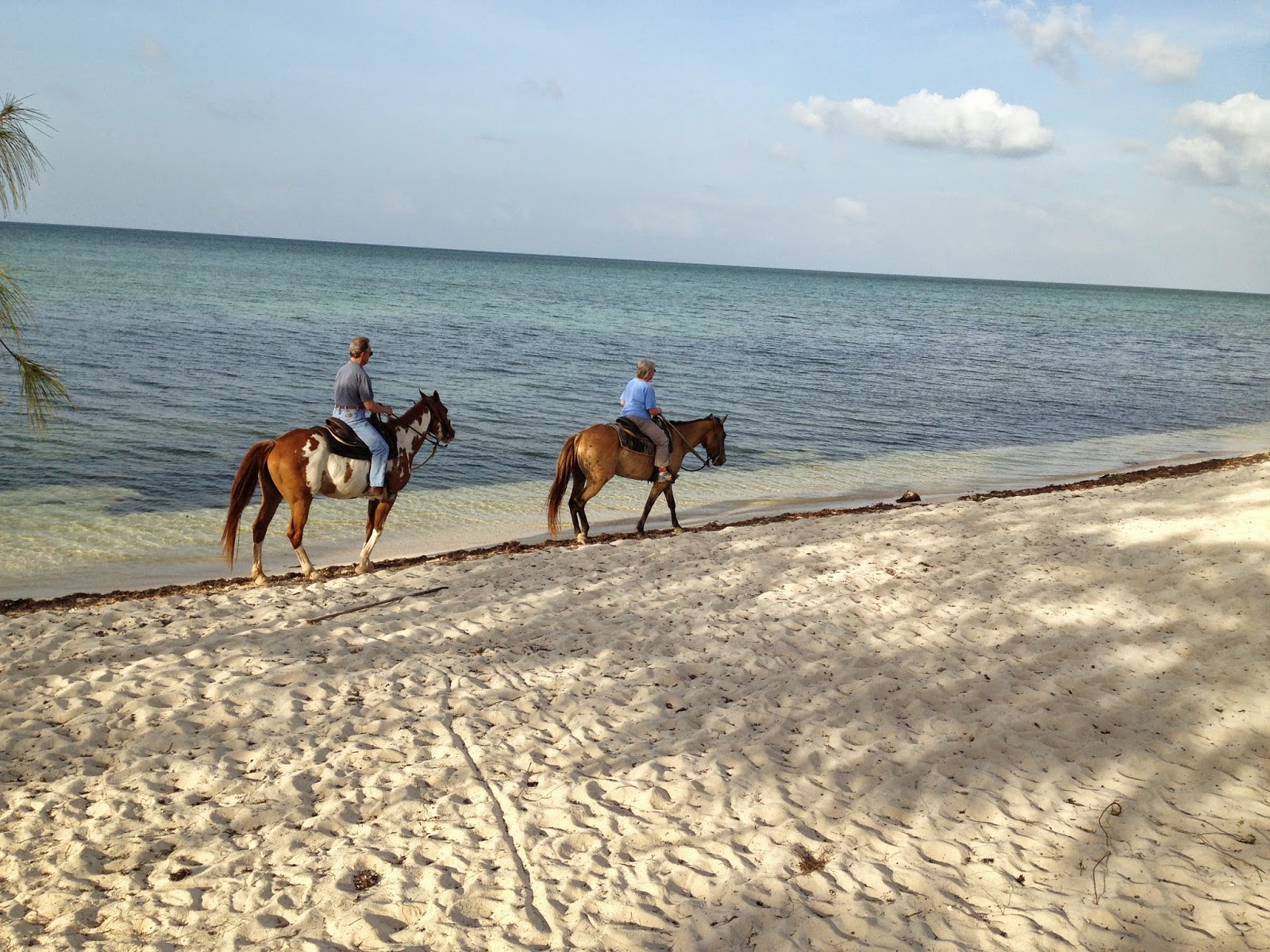 .
Diamond in front and me on Lady.  She was a head tossing, nose to tail trail horse, but she's still a horse. 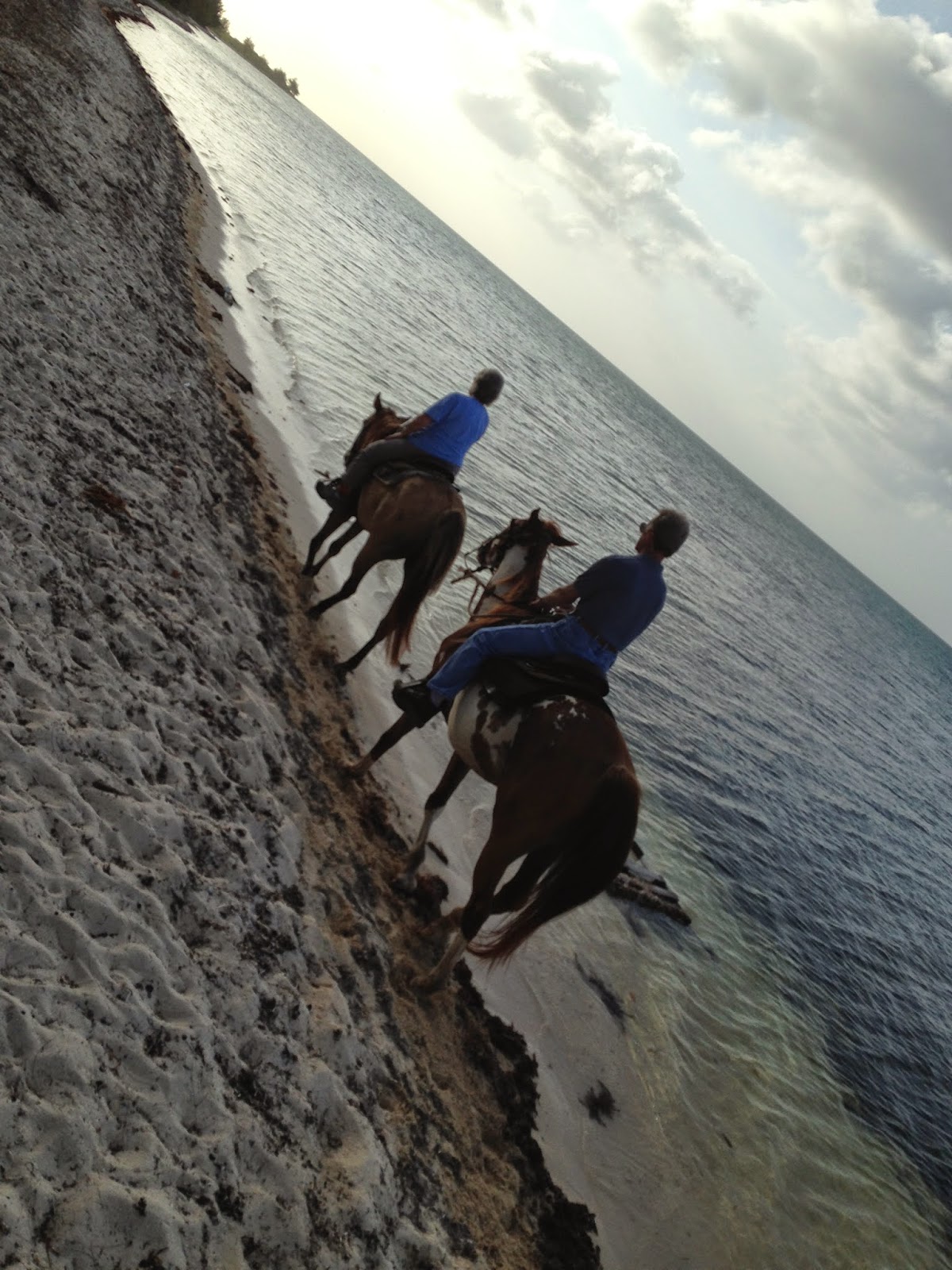 Did I tell you that life is always an uphill battle?

Georgetown, Grand Cayman is famous for its feral chickens and this rooster is one of them.  The pictures were taken at the Bates Family park on the island's west side. 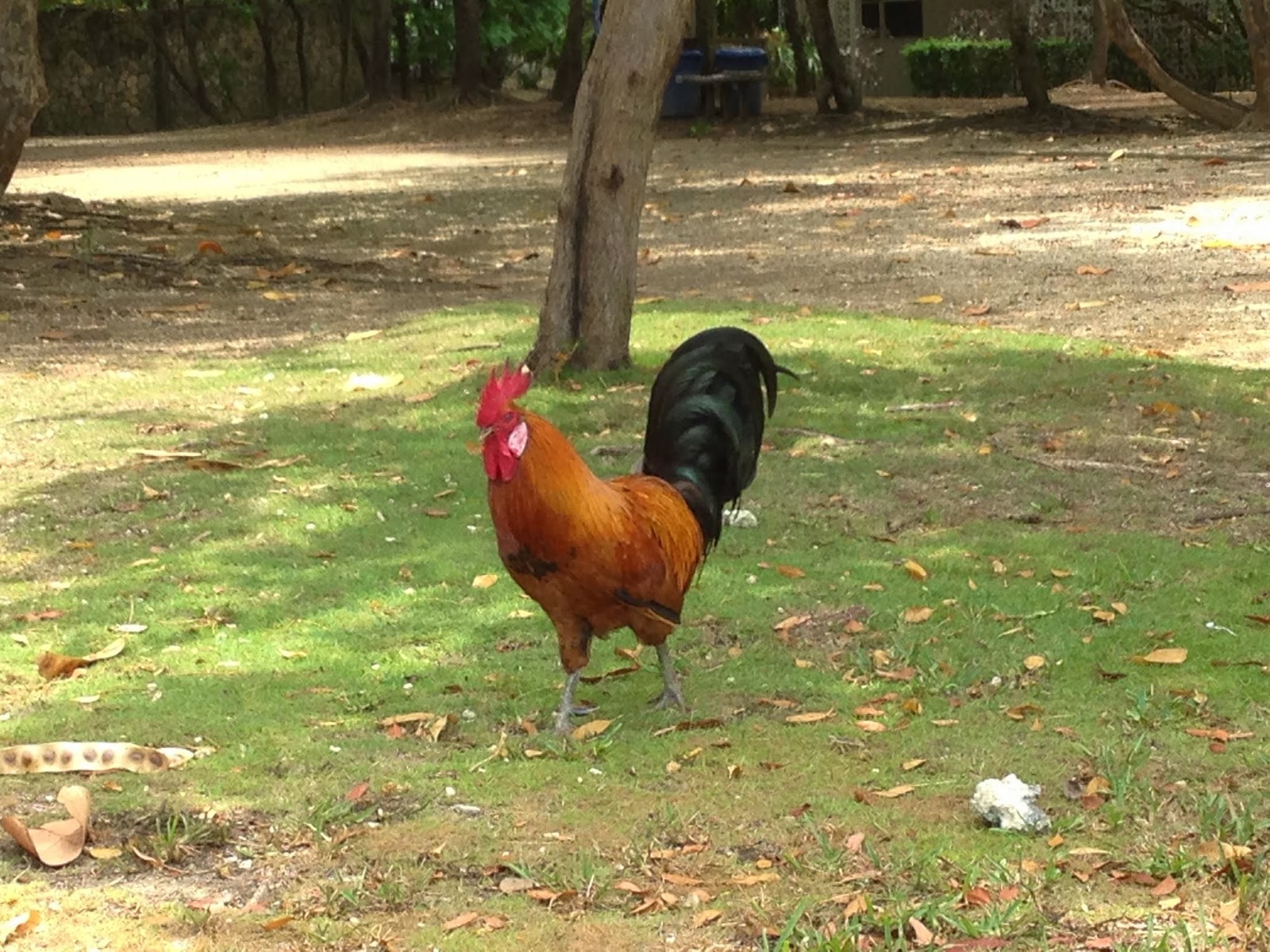 This fellow is beautiful. 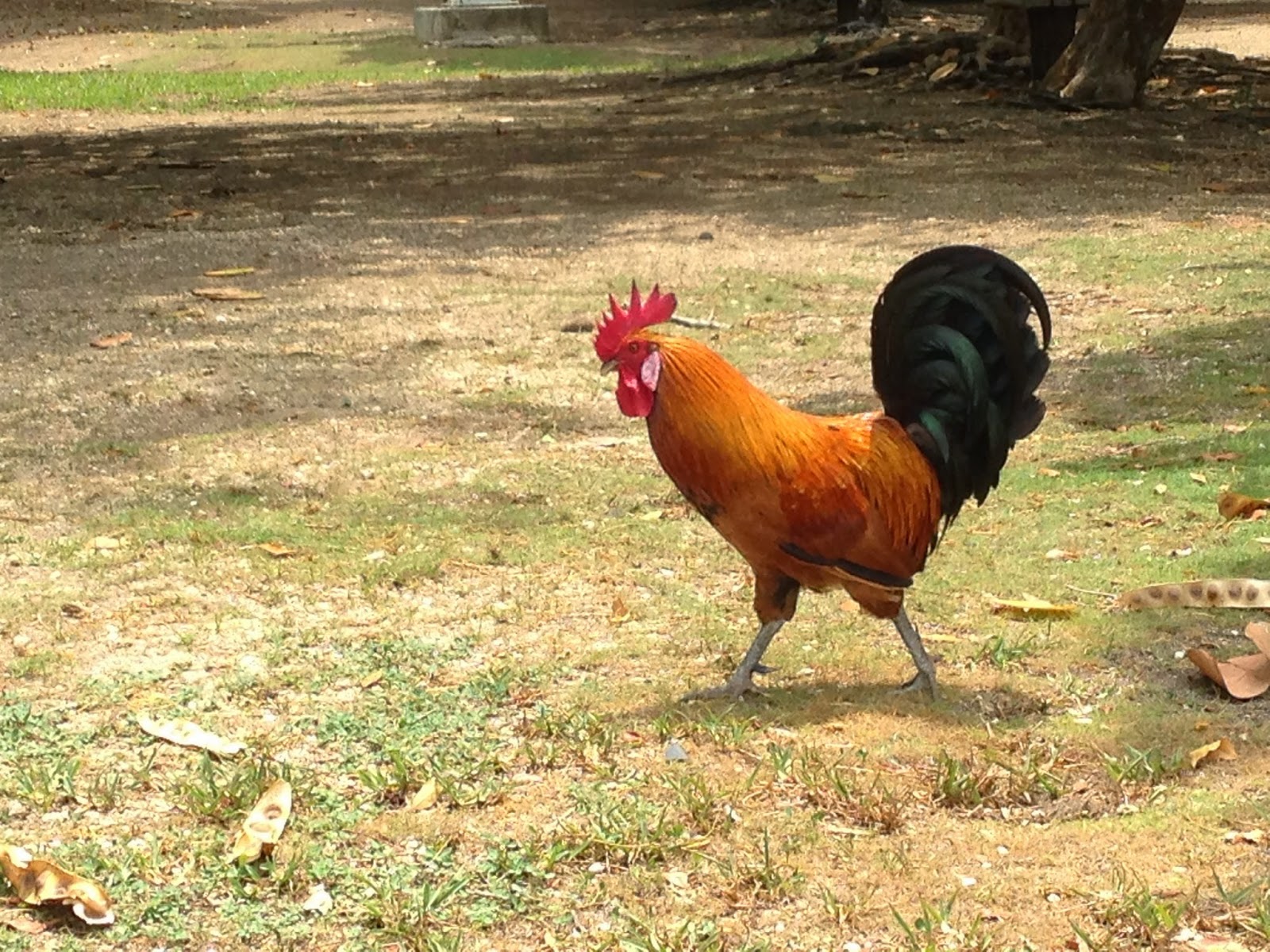 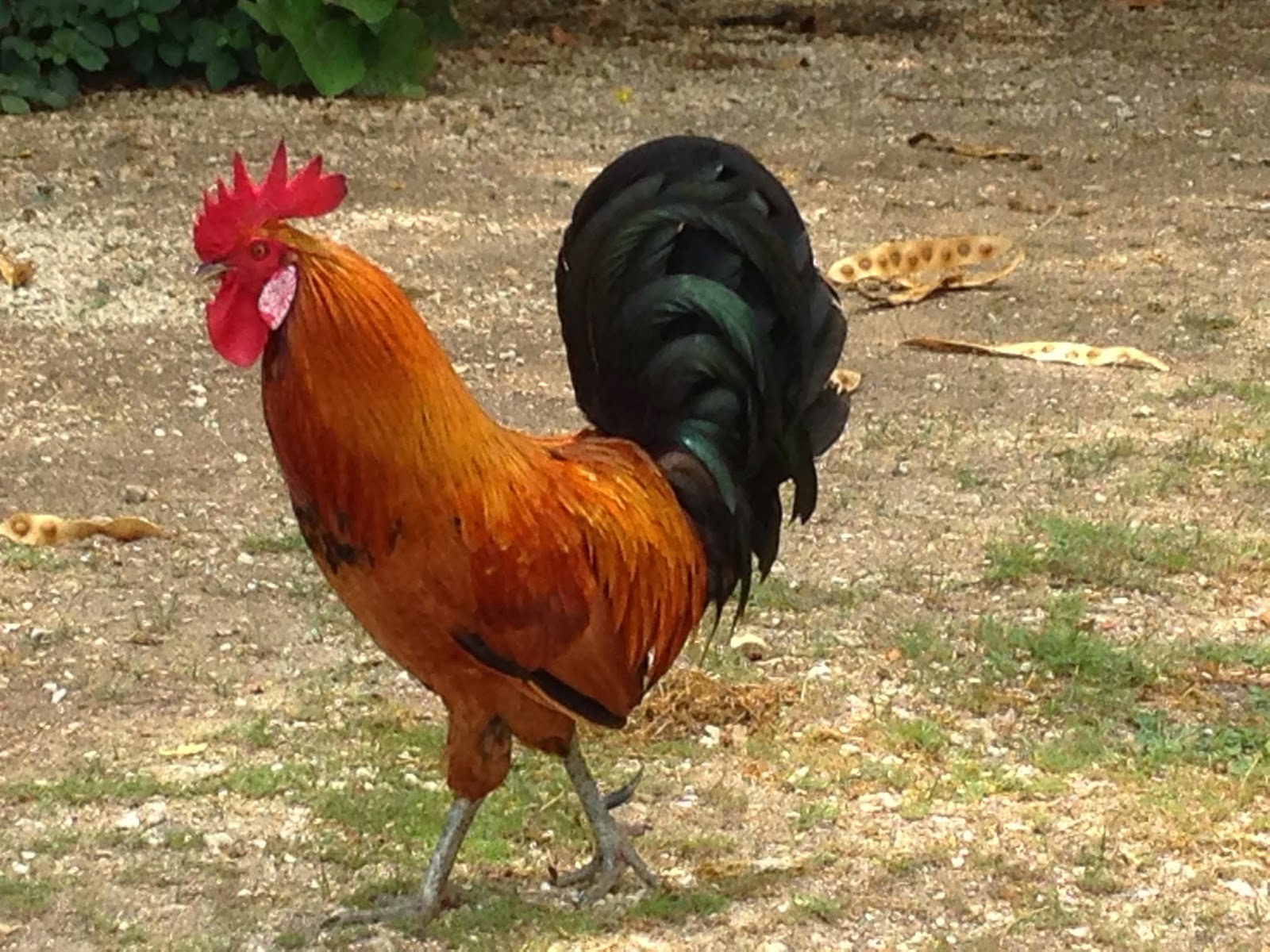 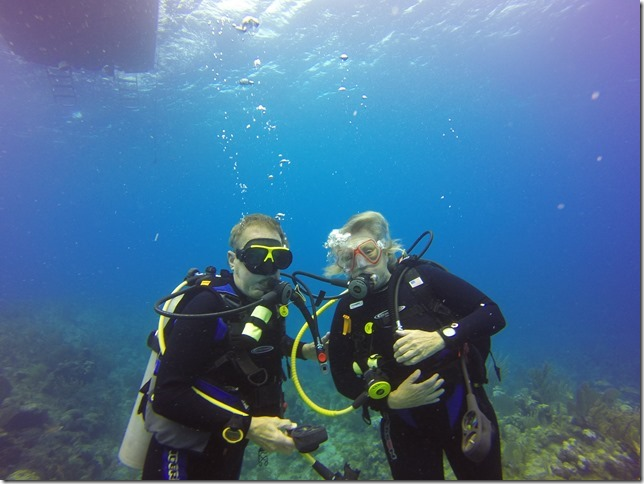 They used to call her Bubbles.
We're doing a safety stop on our last dive at 20' for 3 minutes.  That's the boat above my right shoulder.

On the dive pictured above, Carol and I both blew our dive profile of 60' for 50 minutes, which is never a good thing, because of nitrogen accumulation in the joints which can lead to a potentially fatal condition called the "bends."   But we saw a glimpse of two reef sharks darting in and out of the blue water over the reef's edge.  Well, most people run from sharks, but divers usually swim toward them as we did to a max depth of 81'  Battleship gray, sinuous, and lethal these girls (I have never seen a male shark) swam directly at us, so we were able to study them very closely.  It was a curious experience because one of them was being led by four tiny silver fish just in front of its snout and trailed by another larger fish (not a pilot fish), dark in color, which I did not recognize.  I can only think that they existed in some sort of symbiotic relationship.  It is always a surreal and beautiful experience to be in the presence of sharks.﻿

Just a couple of more days and then back to the REAL world.

So long for now, from Paradise.﻿