It's Callie's Turn One More Time

Thomas McGuane in his book "Some Horses*," quotes a friend of his from Oklahoma, "God made a perfect world but he would like one chance to redesign the horse."  Further, McGuane says, "Certainly, some work could be done with the feet, hocks, suspensory tendons, navicular bones, all of which seem far too delicate for the speed and weight of the horse,  And too often, the fifty feet of unsupported intestine acquires a simple loop and kills the horse,  If the horse were a Ford, the species would vanish beneath lawsuits engendered by consumer-protection laws."

Now I don't know Thomas McGuane or his Oklahoma buddy, but I do know that horse, and she's mine!  Callie is the horse, like some humans, to whom everything happens, and unlike most humans, she suffers without complaint.

When she came to us she had a hideous scar on her right front shoulder that looked to be the product of a vicious bite.  Just a slight correction by another horse, perhaps.  There's the straight-line scar on her left side that runs nearly the length of her belly.  Might be from barbed wire fencing.  Then there is the wire fence scar above her left hind hoof, a reminder not to roll too close to our pasture fence.

There have been several trips by our vet to check minor eye injuries, you know, a piece of hay or dust and her eyes close and water like the Trevi Fountain.  And of course, her navicular and deep flexor tendon problems.  All suffered in silence by my beautiful girl.

While we were on vacation, the young woman who takes care of them for us emailed and mentioned that Callie had welts or hives that seemed to come and go.  We told her that Callie was no doubt suffering from mosquito bites and she, Irene, shouldn't worry about them.  We told Irene to make sure she sprayed Callie with fly spray a couple of times a day.

But we weren't prepared for this: 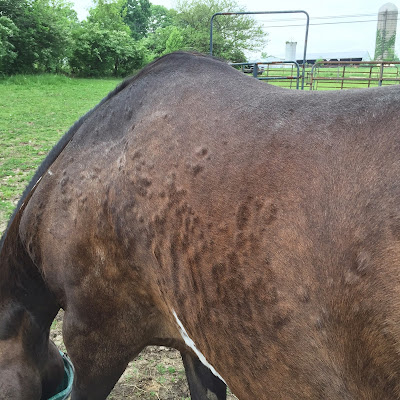 Callie's hide had bubbled up like paint exposed to high heat.

When I finally got a good look at Callie the next morning my first thought was, "Call the vet."

Instead, I sent our vet this photo and the following conversations in text followed.

Me:  Came home from vacation to find Callie covered in what appears to be hives.  Caretaker said they are not as bad as they were.(?)  Callie seems not to be bothered by them.  Is there anything I should do?  Are you seeing this elsewhere?  Looks like an allergic reaction to me.

Dr. Mc:  Definitely is allergic reaction that we don't want to ignore.  I would suggest antihistamines asap.  I can have the office get ready if you want to pick up.  If left prolonged could lead to an exaggerated systemic reaction etc.

Me:  Ok on the antihistamines.  I will p/u after 3 today.

Dr. Mc:  I will also leave a small packet of cortisone granules to get a jump on it.  Should resolve rather efficiently.

When I picked up the antihistamines the syringe was marked in ML, but the prescriptions was for 5 CC's twice per day.  I was confused, but Wikipedia cleared things up right away.  Silly me, CC's and ML's are the same.  Can I get a science class do-over please?

The antihistamine was prescribed for two doses for five days, but on the fifth day the hives reappeared.  Being Sunday, I felt pretty bad about bothering the vet, but another text brought the same immediate response.  Take the second cortisone packet and continue with two 5 ML doses a day.

Callie's hives seem better and she looks like my horse again, but I still have my fingers crossed that the allergic reaction is under control.  Still, I don't know what caused Callie's reaction and that's what bothers me most.

* Some Horses essays by Thomas McGuane, copyright 2013 and published first in hardback by Lyons Press in 1999