Since the coming of American Pharoah I have thought about little else, when it comes to horses, than thoroughbreds and racing.  I'm never going to know the lineage of every champion who put hoof to dirt or shoe to turf, but I will always love the game, the color, the mud spattered jockeys and the thoroughbred's time-compressing speed.  Feeling the tension before my horse enters the gate is part of the thrill of racing for me.  I remember literally being unable to sit down in the hours just before American Pharoah ran the Belmont and then plundered the field in the Breeder's Cup Classic in 2015.  Similarly, I suffer with California Chrome and Frosted each time they race.

One of my favorites was Big Brown (Boundary - Mien by Nureyev), trained by Rick Dutrow.   Now eleven years old, his progeny have begun to make their presence felt in racing circles.  His Derby and Preakness victories in 2008 left the racing world hungering for a Triple Crown Winner, the first since Affirmed decades before.  But in the Belmont he finished 9th, barely crossing the finish line before the last beer concession closed for the day.  A collapse so dramatic that it cast his entire race record in doubt.  In eight races, he finished first in seven of them.  His list of victories also include the Florida Derby, The Haskell Invitational and the Monmouth Stakes.  But to this day, a stench surrounds his career, the same stench of unscrupulous illegality and deception that follows trainer Rick Dutrow. 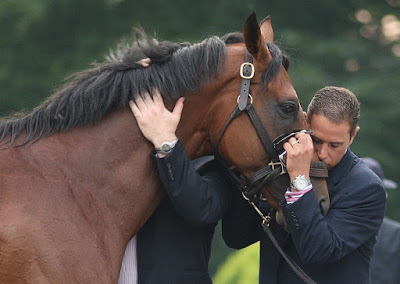 Big Brown and people who loved him.  Check out the watch on this guy. 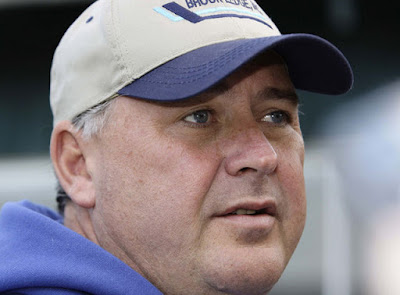 
Dutrow is now serving a 10-year suspension (at one point the state's Racing and Wagering Board recommended Dutrow be banned for life)  of his trainer's license in 2011 by New York regulators.
The former trainer of Big Brown has waged a continuous legal fight to have that judgement overturned.  But the beleaguered trainer's most recent appeal was rejected in federal court.

"The board's decision resolves two specific matters that arose in November 2010: Dutrow's horse Fastus Cactus tested positive for the drug butorphanol-a pain killer 10 times more potent than morphine-after winning the third race at Aqueduct Racetrack on November 20, and three hypodermic needles "loaded with the drug Xylazine" were found in Dutrow's desk in Barn 10 at Aqueduct on November 2.  Xylazine is an analgesic and tranquilizer that can enhance performance by alleviating lameness or calming a nervous horse."  While  he had probably not done anything that other top trainers had done, or been suspected of, he did get caught with his hand in the cookie jar, not once, but many times.  Bob Baffert and Steve Asmussen, both Hall of Fame trainers, have been under some scrutiny in the past for similar infractions.  "If anything, he's (Dutrow) had multiple opportunities to practice his profession in compliance with the rules.  After all these infractions, I don't think any court will say he has been discriminated against...given his record" said Louisville attorney and racing official Robert Heleringer.

While there is nothing to say Dutrow could not set up shop in another state, most racing jurisdictions will uphold the findings of other racing authorities.  An exception might be Louisiana where Heleringer said they "have a reputation for being more lax when it comes to honoring suspensions, 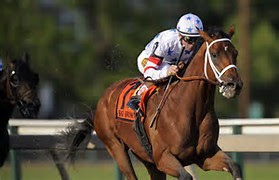 At the apex: Big Brown

but Dutrow's notoriety makes it less likely a state would take that chance."  If he were to apply for a license in a state other than New York and was denied, he would have to disclose the denial in future applications.

So unless Rick Dutrow pulls some nefarious behind the scenes shenanigans, he is out of racing,

At this point Big Brown's future is much brighter than Rick Dutrow's.  And that is a good thing.