A Local Legend Calls It Done

Russell Road, a 10-year old gelding by Wheaton out of the Verification mare Roberta Grump (Roberta Grump produced 11 starters, all winners), called it a career recently at  Charles Town (W Va.) Races.  Winning  more than two million dollars during his career, Russell Road leaves behind a stellar record of 31 wins (22 were stakes wins) in 62 starts. 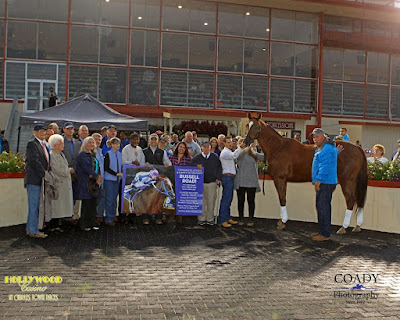 A farewell to Russell Road

Bethanny Roll, a photographer at the Hollywood Casino at the Charles Town Races, had this to say about the chestnut gelding;

"This horse was truly something to watch,  He won over half of his career starts and is a local legend here at the Charles Town Races.

He was always a competitor at the race track.  In fact, when the track had him in the post parade for the West Virginia Breeder's Classic, a race he won three times, he was a struggle to jog off the track, because he wanted to join the competitors and race again.

He had a presence when he came on the track unlike any other (you get an idea of his presence in the picture above). He was the type of horse you knew was something big without even knowing his name." 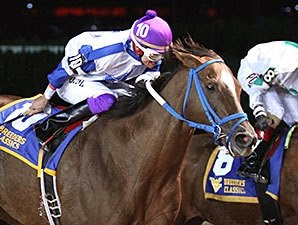 Owner Mark Russell knows that Russell Road is a candidate for the retirement blues and needs to stay busy.  "He'll make any kind of jumper or riding horse and we're going to explore those possibilities for him.  He's not the kind of horse that's going to be happy stomping flies out in the field. Russell said.  He wants to do a job, he loves being around people, he loves having something to do. It's just who he is. It doesn't matter if you take him home and put him out in the paddock. 30 minutes later he's at the gate wanting back in.  He just likes that connection with folks." 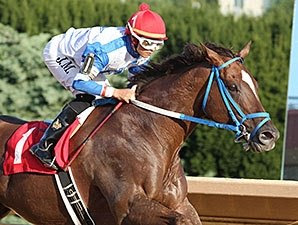 I published this little story of an obscure gelding from a third tier track because so many stories from the racing world are scarred and ugly. corrupt and tawdry.  Tales of injured horses running on pain-killing drugs until they break down or are sold to slaughter when they can no longer produce on the track or the pay window are common.  This is a story of triumph.  A happy story.  Racing needs more of them.  And so do we.