His first stride was not as explosive as jockey Victor Espinoza would have hoped, but with his second stride California Chrome accelerated and his saddle began to slip.  Over the remaining 1-1/4 miles of the Dubai World cup it slipped from the heart-girth nearly to Chrome's loins. Somehow Espinoza managed to lean forward enough to keep his balance and race on. 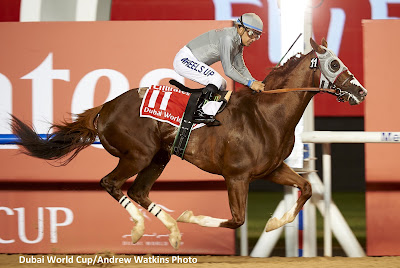 ...slipped from his heart-girth nearly to Chrome's loins.

Racing from the eleventh post position Chrome, wearing blinkers a drab grey/silver in color, powered to a stalking position by the first turn, three wide, third behind the talented Mshawish with Frankie Dettorri up and Special Fighter shadowing just off his flank.  Not wanting to be trapped in traffic, Espinoza kept Chrome three wide up the back stretch.   Mubtaahij moved to within striking distance in fourth, with my favorite, Frosted, lurking in fifth.  The first quarter was run in a leisurely 25:3, but the pace quickened in the second to 23:6.

In a pre-race interview Espinoza said that he lets the horse tell him what kind of race it wants to run. What if the horse doesn't want to do what I have in mind?  Espinoza said that if the other horses would give him the lead in the world's richest race, he would take it, but still would have been happy lying either first or second, just off the lead. 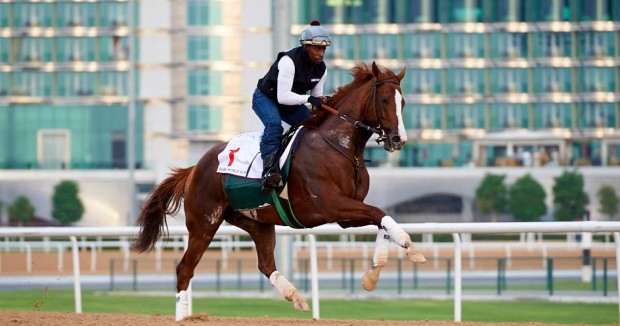 Pre-race workout.  Look at his size and his impressive muscular development.  Magnificent.

The son of Lucky Pulpit had finished a disappointing second in last year's Dubai World Cup to Prince Bishop and then was shipped to England hoping to compete at Ascot.  But Chrome suffered a bruised canon bone which sidelined him for the balance of 2015.

Returning to competition in January 2016, Chrome finished first in the San Pasqual Stakes-G2 with World Cup competitor Hoppertunity finishing third.  While he did not look particularly sharp after the long layoff, his win left trainer Art Sherman satisfied and confident in Chrome's future.  His form was much improved in his second race, this time at Meydan Race Club in Dubai, where he finished powerfully to win its February 25th handicap race.

Horses are at their physical peak in their fifth year, finally mature in bone, muscle and experience.  As the World Cup herd turned for home, Chrome's will and strength were tested as he lay third until Mshawish drifted out and Mubtaahij slipped into contention along the rail.  Chrome, now four wide, powered up as Frosted pushed himself into the mix lying fifth on the far outside.  Hoppertunity, whose career has been spent chasing California Chrome, struggled to find running room after a race spent in the rearmost rank.

Inside the last 300 meters the logjam began to break up with Frosted and Mshawish fading and Mubtaahij moving boldly into second position,  Espinosa went to the right hand whip, two or three times, perhaps more, and the gap between Chrome and the field widened to 3-3/4 lengths at the wire.
In winning, Chrome set a course record for 1-1/4 miles at 2.01:5 and in doing so collected $6 million dollars of the race's $10 million purse, making Chrome the richest horse in America's long history of Thoroughbred racing with $12,532,650.00 in earnings.  Mubtaahij finished second with the unlucky Hoppertunity third.  Frosted, valiant and game as always, slipped to fifth and the early leader, Mshawish, dropped away from the pace to finish a distant sixth, 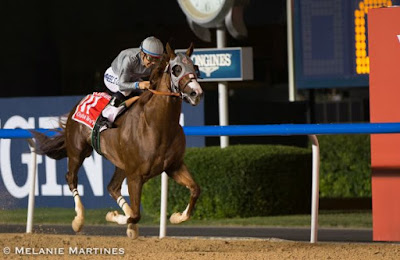 "Where is the wire?"

As soon as he could pull the classy chestnut with his flashy white blaze and stockings (Chrome) up, Espinoza leaped to the racing surface to adjust and tighten Chrome's errant saddle.  "I kept thinking, where's the wire?" Espinoza said, referring to the slipping saddle. "It wasn't coming fast enough." 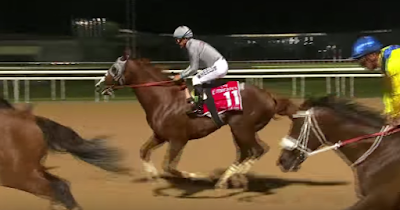 Just beyond the wire.  The cinch far beyond Chrome's barrel where it belongs.

For Chrome the future holds several more races all pointing to the Breeder's Cup Classic in October and then retirement at Taylor Made Farm in Kentucky.   Thus far California Chrome has won 12 of 21 starts with only five races out of the money, so when retirement comes it will be a well earned one. Well earned indeed.