Maybe the cool and distant reception our tour received at Winstar Farm had something to do with our bus driver squeezing into a place he shouldn't have and plowing into one of the large flower pots standing outside the door of the stallion complex.  Or, as it is in most companies, attitude is a reflection of ownership or management.  Giving the benefit of the doubt, I'll excuse Winstar and blame it on the youth of our tour guide, the marketing manager and her assistant.  There is more but I'll skip the details.

Winstar itself is a very young company, founded in 2000 with the acquisition of the 400 acre Prestonwood Farm by current owner Kenny Troutt and his partner.  The farm's history dates to the 1700's, then owned by the Williams family of Virginia.  Their bank barn and several other buildings remain and are on the National Historic Register.  Along with the purchase of Prestonwood came two sires: Kris S and Distorted Humor.  Before his death in 2002, Kris S sired 5 Breeder's Cup winners and 3 Eclipse Award winners.  Distorted Humor, foaled in 1993, remains an active sire to this day, commanding a six figure fee.  More about him later.

There are three viewing areas in the new stallion barn, 18 stalls, 2 breeding sheds and 22 three acre paddocks.  The first horse to be ushered into the viewing area was the incredible Tiznow, once both American Horse of the Year and California Horse of the Year.  He is the only back- to- back winner of the Breeder's Cup Classic and winner of $6.2 million dollars.

His progeny have won the Belmont, Travers Stakes, Dubai World Cup, Santa Anita Derby, the Wood Memorial and others.  My Sweet Addiction won the 2015 Vanity Stakes, Colonel John the Santa Anita Derby, Well Armed won the Dubai World Cup by a record 14 lengths and Da'Taro beat Big Brown in the 2008 Belmont.  It should be remembered that Big Brown finished dead last in the race for an unknown and still suspicious reason.  His trainer has had his license lifted in some states.

All of the photos taken at Winstar, with one exception, were taken in predominantly natural light under a dome in one of the viewing areas.  The light illuminates the best of the horses physical characteristics and if they were not elegant enough, well just take a look. 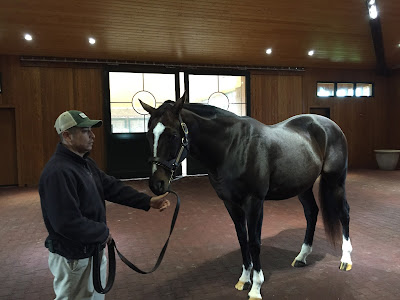 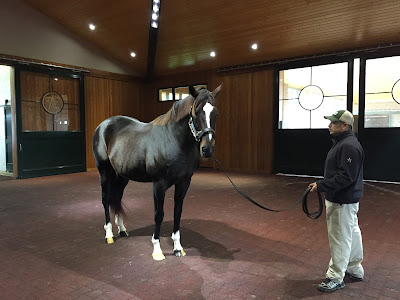 Tiznow ranks in the top 2% of sires by average earnings. 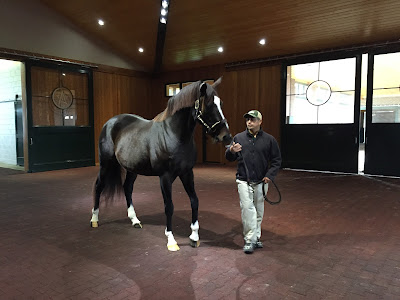 Still rowdy and sure of his supremacy, Tiznow.

Super Saver won the Kentucky Derby in 2010.  Just another big, fast bay horse, no not really, just the fulfillment of a lifetime dream to see a Derby winner up close.  And I was not disappointed.

Super Saver was sired by Maria's Mon who sired another Derby winner, Monarchos, the 2001 Derby champion. 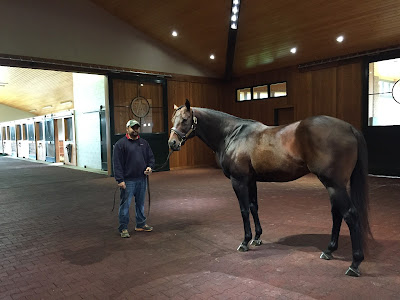 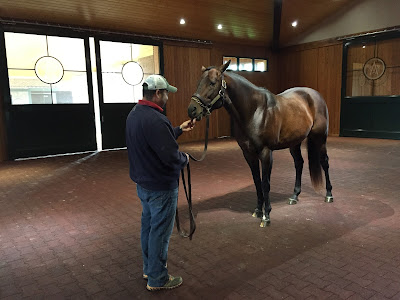 Begging for a peppermint. 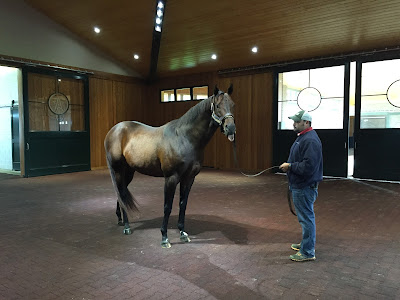 I'm exhausted, can't you see my tongue's hangin' out? 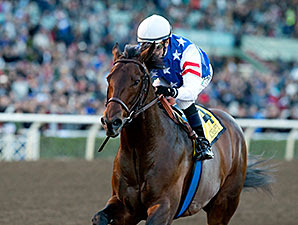 Runhappy winning the 2015 Malibu Stakes with Gary Stevens up.
Runhappy looks like his sire Super Saver.

Pioneer of the Nile was a 2006 foal sired by Empire Maker x Star of Goshen by Lord of War (Arg ) and is now an up and coming third crop sire.

His was a successful racing career finishing second to Mine That Bird in the 2009 Kentucky Derby with wins in the Santa Anita Derby, San Felipe Stakes and Robert B. Lewis Stakes as a three year old and the Cash Call Futurity G1 as a two year old. 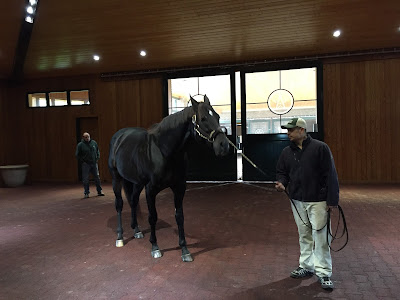 Pioneer of the Nile, his groom and Stallion Manager Larry McGinnis in the background.

In Pioneer of the Nile's lineage are:  Empire Maker, Fappiano, Mr. Prospector and Northern Dancer on the top or sire side and Lord of War, Key to the Kingdom and Bold Ruler (Secretariat's Sire) on the bottom or dam side, but Winstar would like to introduce broodmares with Seattle Slew or Storm Cat (Sire of Empire Maker) breeding to his progeny. 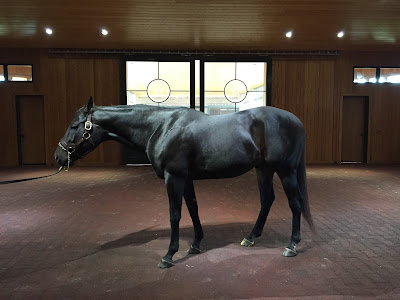 Pioneer of the Nile 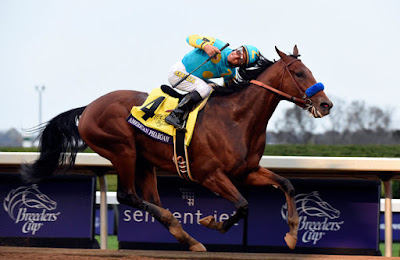 We may never in our lifetime see another horse like American Pharoah, record setter and winner of American horse racing's grand slam:  The Derby, The Preakness, The Belmont and The Breeder's Cup Classic.  Unlike many thoroughbreds, American Pharoah is not a brat, but a sweet and gentle champion.  My wife and I have tickets to Coolmore America, Ashford Stud to see AP on January 27th.  That's the good news.  The bad, we're not guaranteed to see him.  You pay your money and take your chances.

Pioneer of the Nile appears to have the same sweet disposition as his son.  In the two pictures that follow he seems anxious for company. 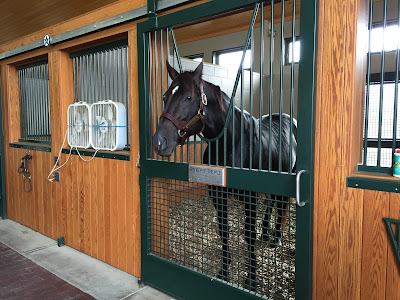 Pioneer of the Nile at home. 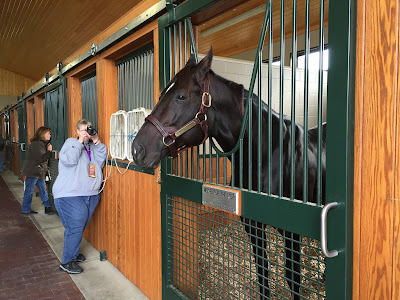 Oddly, though we might have been able to pet Pioneer of the Nile, or at least be photographed near him, no one tried.  I will say that as we walked through the barn we were tightly shepherded by the stallion manager and other staff.  It was probably just as well.

Lane's End has AP Indy and Winstar has its own star, Distorted Humor, now 23 and still active in the breeding shed.  His 2016 fee, a mere $100,000.00  Why?   Because this smallish sire (15.3 hands) has sired over 130 stakes winners.  He has sired more G1 winners than all but two North American Sires. His progeny have won each of the Triple Crown races and he is a grandsire of a Kentucky Derby winner.  You'll recognize these names: Funny Cide, Commentator and Drosselmeyer, winners all.

At the 2015 Keenland September sale a Distorted Humor colt sold for $1,525,000 to Goncalo Torrealba of Three Chimeys Farm.

Distorted Humor's own race record of 8 wins, 5 places and 3 shows in 23 starts is an enviable one.  He was still winning at the advanced age of five.

Distorted Humor was not on display the day we visited Winstar, but wandering up and down the aisles I was able to get this picture, not the best, but interesting. 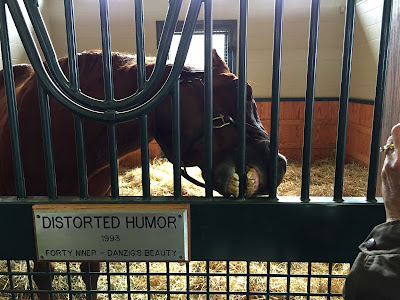 You can see that there are bars preventing Distorted Humor from reaching outside his stall and nailing a passerby.  The hand on the right had just tapped on the piece where Distorted Humor is chewing on the bars.  Obviously he is a biter and best left to his leisure.  They can't all be Pioneer of the Nile.

While I love horse racing, I know that many people do not share my enthusiasm.  Horse racing has been its own worst enemy and deserves much of the criticism it has received.  But the industry has begun to clean up its act, even to the point of its concern for retired race horses.  Of course, the minor leagues of racing, the claimers, race on and on, I recently read of a retired race horse that had raced every two weeks for nine years without a break.  Nine years!  This is the type of abuse that has caused many, myself included, to question the industry and its neglect, mistreatment and its discarding of animals like chewing gum wrappers.  Still, there are unscrupulous trainers who watch their horses run until they cannot run anymore.  Let's not even talk of the drugs masking chronic injury, milkshaking tired or sore horses to reduce the lactic acid in their system and then there are the catastrophic injuries to consider.  But as long as two people have two fast cars, or two fast horses, they will race them and when they do, we have their beauty and grace to take our breath away.  It is the nature of man to answer a challenge and the nature of the thoroughbred to run.

Copyright January 15, 2016
All Photos by the author, Copyright, January 16, 2016 except Runhappy and American Pharoah in the public domain or Bloodhorse.com.