This was a post I did for Facebook's Justify Fan Page  yesterday, July 12, 2018.  I was profoundly surprised by the overwhelming response to what I had written, and doubly surprised by the class shown in the two or three "criticisms" posted in response.

"I happened to see a picture of Barbaro yesterday and was struck by the similarities between him and Justify.  Perhaps it is just an illusion, or I've lost my mind, you can tell me, I won't mind.

Both are chiseled, ripped into elemental muscle and the sinew that holds all things together and cloaked in burnished, hand rubbed beauty. 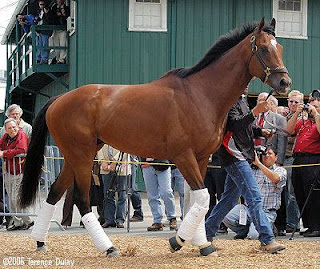 The legend, Barbaro at the Preakness. 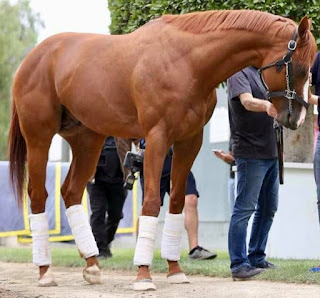 I could find no reference to Barbaro's height, although Edgar Prado, his jockey, said he stood 17 hands high, while Justify is an inch shorter at 16.3.  Even their records are the same.  Justify is undefeated at 6-0 at this point in his career.  Barbaro was undefeated with six wins entering the 2006 Preakness where he broke his right hind leg leaving the gate.  Ironically, it was the magnificent Bernardini who won the race. 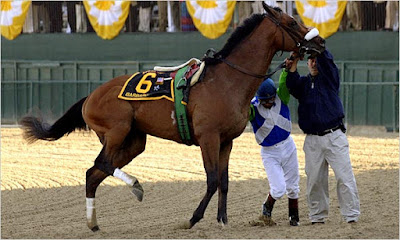 Even though there was never a chance that Barbaro would race again, no expense was spared by his owner, Roy Jackson, in trying to save his life.  While the leg healed, it was laminitis that made euthanasia necessary after an eight month struggle.

A nursery rhyme sums up the effort expended in trying to save Barbaro's life, "...all the king's horses and all the king's men, couldn't put Humpty together again."

His trainer, Michael Matz said, "I think the mystery will always be how good could he have been?  I'd like to think he'll be remembered as one of the best.  He certainly brought a lot of people together."

We can all hope that this is where the similarities between Barbaro and Justify end." 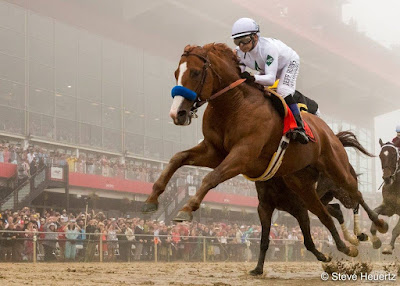 In the fog, Justify leaps tracks in the turf during the 2018 Preakness. 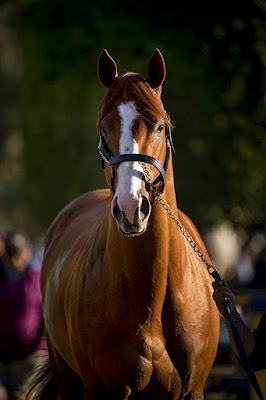 Copyright July 12, 2018 Loren R. Schumacher
Credit for all photos goes to the photographers.  The author makes no claim to them.
Posted by Loren at 1:30 PM