In recent days California has been stricken with devastating wildfires, one of which, the Thomas Fire, has consumed nearly 200,000 acres.  Almost everything in its path has been destroyed, but thankfully as of now, there seem to be no human casualties.

Trainer Martine Bellocq was critically burned trying to save her nine horses from the flames.  To date there have been 46 horses killed and most assuredly there will be more casualties in an area littered with horse farms and facilities.


Sadly one of those horses trained by Peter Miller, 3 year old California Diamond, who in 14 starts won 5 stakes races and finished second in 5 more, succumbed. 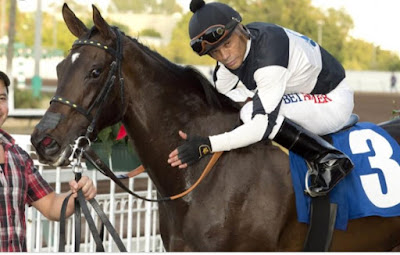 In their panic, a small group of horses broke through a "knockdown fence" and vanished into the surrounding hills.  Spokespersons are confident that they will be located and returned to their owners. 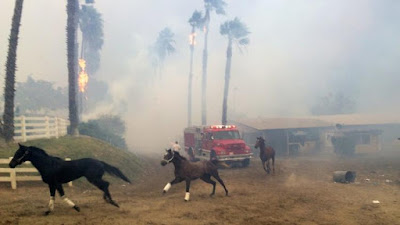 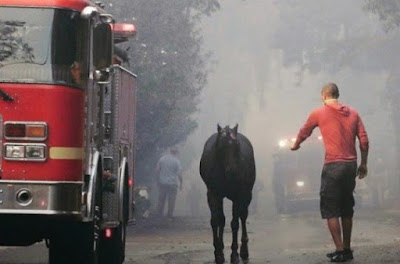 A volunteer tries to calm an approaching horse.

There were nearly 450 horses at San Luis Rey, and those that have survived owe their lives to the grooms and volunteers who walked into the inferno in order to save them from a hideous and tortured death.

But as always, those who have the least lose the most.  Nearly all of the grooms and other backstretch workers lost all of their possessions trying to save their beloved horses.  Many funds and truckloads of supplies and clothing have been rushed in to assist in the human recovery.

Taylor Made Farm have donated a no-guarantee season with California Chrome and will donate the booking fees before they have been collected.  The money will be used to help the track workers get back on their feet. 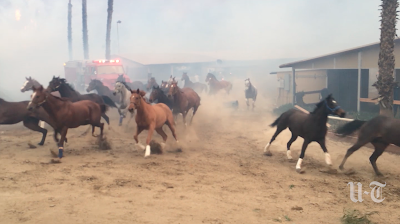 Panic in the alleyways of San Luis Rey (SLR).

At one time 260 of the approximately 500 horses were housed at the Del Mar race facility.   Sixty more moved just across the street from SLR to the Trifecta Equine Athletic Center, an equine rehab facility, and in recent days more have been distributed to Santa Anita and Los Alamitos.  While they wait to be reclaimed by their owners, those that need medical attention for burns receive immediate attention.  It remains to be seen what effect smoke inhalation will have on them. 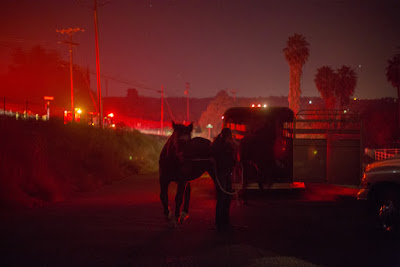 In the midst of this chaos, we should remember to say a silent prayer for the home and business owners of California, whose lives have been forever altered by the fires.  We hope that they will recover their balance and find the emotional and financial resources to jump-start their lives once more.

In the ash and rubble of ruined dreams, some smaller stables will cease operations.  Grooms and trainers will find other jobs in the racing community, but they will never again be in charge of their own futures.  But for others, like Peter Miller, sad news was offset by good news.  Miller's horse Calculator, who ran second to American Pharoah in both the FrontRunner Stakes GI and Del Mar Futurity G1, was reunited with the trainer after being missing. 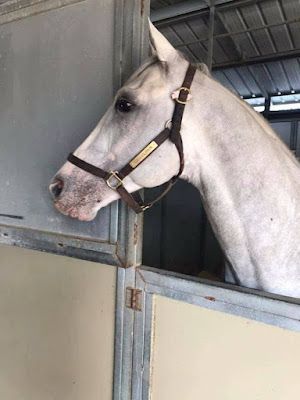 HOW CAN YOU HELP?

Santa Anita Park, The Stronach Group (owner of Adena Springs Farm) and Del Mar Thoroughbred Club have created a GoFundMe page: https://www.gofundme.com/thoroughbredcare.  To date more than $598,000.00 have been donated.  No amount is too small and donations are desperately needed.

I've donated and I hope you will too.

All photo credits belong to the photographers

The news is both good and bad with regard to the monstrous wildfires plaguing California.

The Thomas Fire, already the fourth largest in California history at 250,000 acres, will no doubt grow in the face of Santa Ana and Sundowner winds from Thursday the fifteenth through Sunday the seventeenth.  Sundowner winds are unique to the Santa Barbara area and originate off-shore with wind speeds reaching those of tropical storms, 60 miles per hour.  The Santa Ana winds are expected to range between 15 and 25 miles per hour with gusts to 40 miles per hour.  Not particularly encouraging.

Still more sad news regarding the death of San Diego area firefighter Corey Iverson, 32 years of age.  He leaves behind his wife who is expecting their second child in the spring of 2018 and a 2-year old as well.  Our condolences, of course.

A filly by Grazen x Chelcees Hope, named Scathing, is the first horse from the San Luis Rey fire to race and to the delight of everyone. she won.  Racing last to first in a five furlong race, a distance which is a bit short for her, she split horses in the final furlong to win by one and one-half lengths. 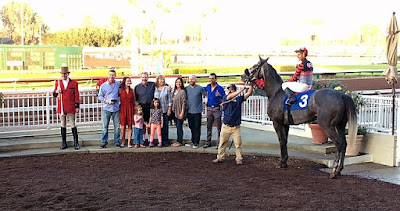 Scathing was claimed for $8000.00 at Santa Anita on October 6 and had been training well since her removal from San Louis Rey.  Her barn was never threatened and she remained in her stall while panic overcame those who had to be freed in order to save their lives.  By the way, my vet's tech told me that she heard the heat was so intense in the recent fire at San Luis Rey, that the horse's red blood cells exploded among those who perished! 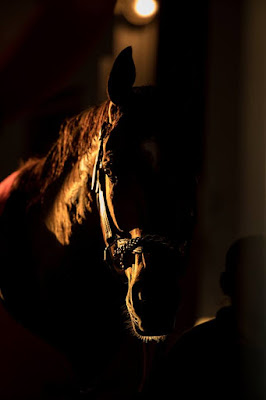 Scathing was cleared for competition after an "auscultation of the lungs and airways" by attending and state veterinarians.  All horses stabled at San Luis Rey will undergo similar tests before being cleared to return to racing. 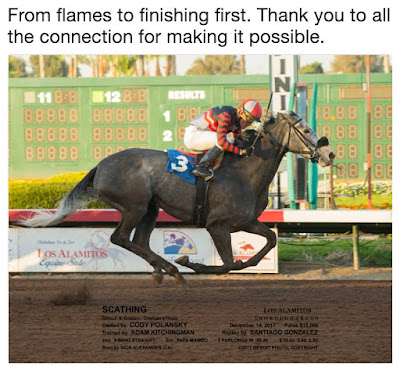 Scathing at the wire

Finally, Juddmonte Farm auctioned a "no-guarantee" season with Uncle Mo.  The winning bid of $110,000 was matched by Juddmonte.  The money will be donated to Thoroughbred Charities of America's Horses First Fund.

Update copyright 12/15/17 by Loren R. Schumacher
Photo of Scathing copyright belongs to the photographer or race facility.
Posted by Loren at 5:45 PM