Maybe it's because I don't have the best eyesight, that I love to look at pictures.  Life in stop action, every detail frozen in time to be savored, to be examined in your own good time.  I've collected photographs since I can remember and the computer, a treasure trove of digitized images, has given me a resource that I could never have imagined and at a price that anyone can afford.

Horses satisfy our souls, elevate our spirit and stir our hearts and let's not forget the human beings who ride them, the courageous men and woman who risk their lives to do the one thing that few can, ride a thoroughbred gate to wire faster than the rest.

These are just a few of the photos I've collected in the past year, 2016.  Perhaps one of these horses is a favorite of yours.  I hope so.


First, a remembrance or two and some wistful goodbyes. 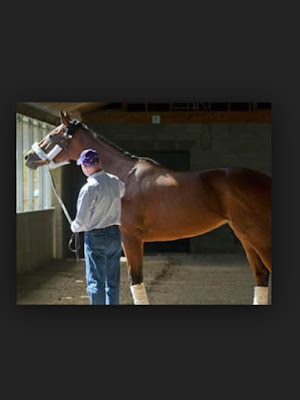 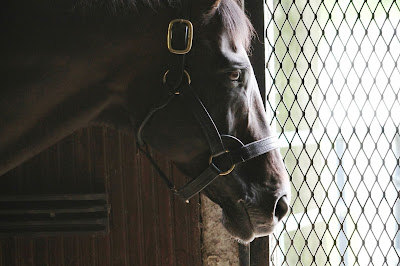 Cigar 15 days before his death. 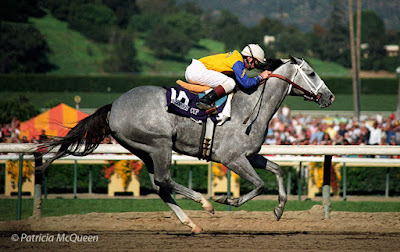 Lady's Secret, the Hall of Fame daughter of Secretariat.


Secretariat is better known for his fillies and mares than his male progeny, an exception is Tinner's Way, now a resident of Old Friends Equine in Georgetown, Kentucky.  While she is deceased, Lady's Secret's record remains. 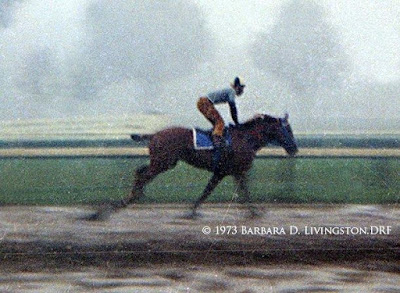 Arguably the greatest thoroughbred of all time, this is Secretariat in 1973, his legendary Triple Crown year.  This photo was taken by famed photographer Barbara Livingston when she was twelve years old. 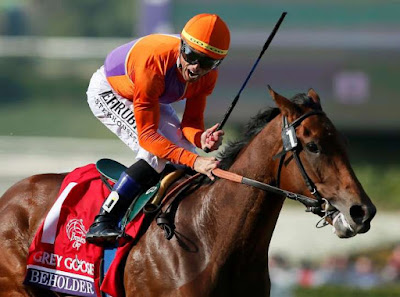 The late Garrett Gomez aboard the incredible Beholder. 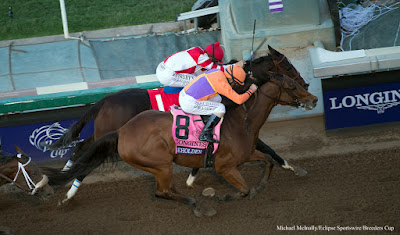 
Beholder was retired to Spendthrift Farm in Lexington after winning the Distaff in perhaps the greatest horse race anyone has ever seen.  Her first suitor in February will be the great Uncle Mo.

Earlier I mentioned the danger in horse racing and the courage of the jockeys. 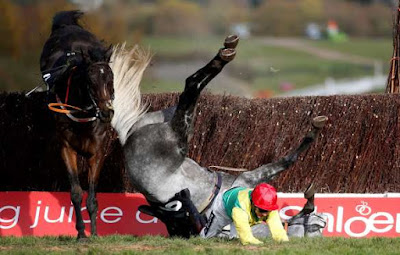 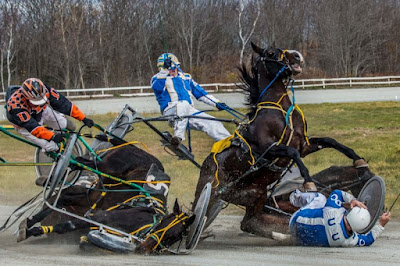 Northside Downs, North Sydney, Australia.  A catastrophic wreck in which everyone, horses and drivers survived, although one of the drivers was hospitalized.

Lest we forget the ladies. 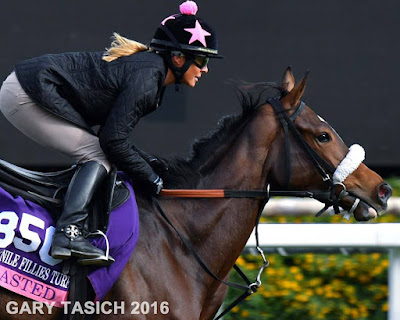 Chantal Sutherland has been a very successful jockey in her home country, Canada.  She always ranks among the leading jockeys at Woodbine.  She has had more difficulty finding rides and owner/trainer support in the states, but is currently riding at Santa Anita  Here she is seen aboard Coasted, a contender for the 2016 Breeder's Cup Juvenile Fillies Turf

Chantal was once the paramour of Hall of Fame jockey Mike Smith and was featured in the realty series,Jockeys, which ran for two seasons.  Her rocky relationship with Smith was the focal point of the series and when the break-up came between them, the series ended. The two were lovers and roommates and the series' tension was driven by the dichotomy of her love for Smith versus his ego and unwillingness to commit to the Canadian beauty.  His loss.

Afterward she married and had a child, retired and began a career unrelated to horse racing, but she simply could not stay away and she has returned to her first love, racing. 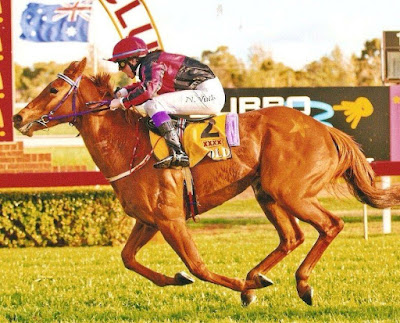 Nicole Vuille, an Australian jockey whom I became aware of through Facebook.  Click on the photo and see that she is screaming.  I would have been too.


It has been a year of retirements, too. 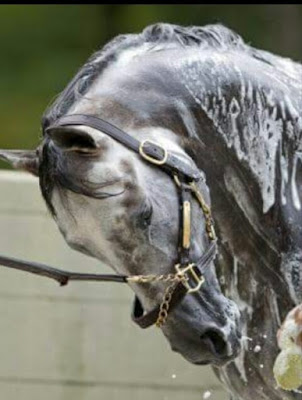 Frosted in a lather.

Frosted (Tapit x Fast Cookie) needs no one to apologize for his sterling career. He was always a threat whenever he raced.  Wherever there was racing, Frosted and his connections were there, be it in Dubai, Kentucky, Maryland, New York or California.  He raced the life out of a tired American Pharoah at Saratoga, but he seemed to have a problem carrying his speed to the finish in some of the longer route races.  But his record setting effort in the 2016 Met Mile (1:32.73), winning by 14 1/2 lengths, was a historic achievement and his victory has been judged the premier racing performance of the year.  He is retired now and I think racing is poorer for it.  I will try to see him at Godolphin's Jonabelle this year. 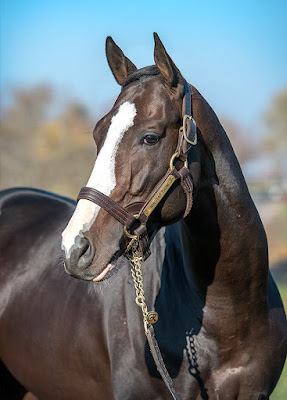 This is Tourist, who defeated the favorite, Tepin, in the 2016 Breeder's Cup Mile.  In the same race in 2014 he finished 13th and 8th in 2015.   Look at the hard set of his eye.  I imagine that this horse can be a handful if you don't stay on top of him and after seeing him act up during a workout prior to the Breeder's Cup, my suspicions were confirmed.  I believe that Frosted would have easily bested Tourist in the BC Mile.

It was a year of early retirements, adding credibility to what we already knew, that stallions and mares are chattel to be used as cash generating breeding machines, until they can no longer perform or are too old and fragile to bear a foal.

Nyquist ( Uncle Mo x Seeking Gabrielle ) was never right after winning the Derby this year. Mysterious illnesses plagued him off and on and his performances suffered.  His connections sited a "growth spurt."  He is recovering nicely at Godolphin's Jonabelle farm after recent colic surgery!

Ironicus, the middle distance turf horse by Distorted Humor was retired to Claiborne Farm.  In the last two years the five year old won 5 of 10 races with 4 second place finishes.

Tamarkuz (x Speightstown) won the BC Dirt Mile in 2016 with Mike Smith aboard.  The five year old began his career in Great Britain before heading to Dubai and then the U.S.  A winner of 8 of 20 starts with additional placings, Tamakuz won nearly two million dollars and will spend retirement at Sheikh Handen's Shadwell in Kentucky. 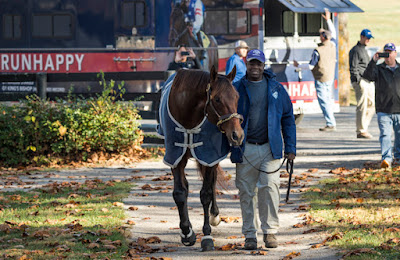 Known as much for his hilarious sleep habits as his speed, Run Happy was retired to Claiborne Farms after finishing 8th in the BC Dirt Mile as a four year old.  He was undefeated in sprint races and was 6 for 7 as a three year old, winning an Eclipse Award as Champion Male Sprinter.

But in the present and recent past there more than enough equine heroes to capture our attention and our hearts.

After American Pharoah and Frosted, my personal favorite is the Candy Ride colt, Gun Runner.  This is a  horse that can never be counted out and while he may not be Arrogate, he brings grit, guts and determination to every starting gate.  In 11 starts he has 6 wins, 2 seconds and 2 thirds, among them a win in the G1 Clark Handicap in November.  He is a possible starter in the Pegasus, where he will acquit himself with his usual maximum effort.  Did I mention that I love this horse? 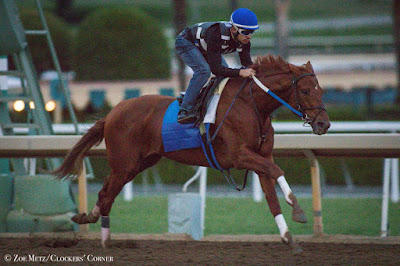 And here are a few more still racing in the present or in out hearts. 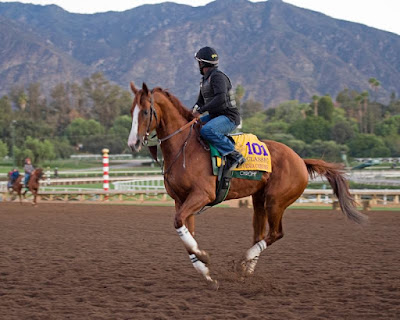 California Chrome will race anyone, anywhere, anytime.  He will be retired to Taylor Made after the Pegasus. 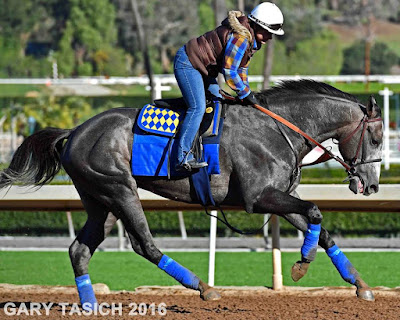 Courage and speed to spare, Arrogate with Dana Barnes up.  He was scratched from the San Pasqual
stakes (GII) on New Year's day, due to wet track conditions.  Trainer Bob Baffert felt that Arrogate was not mature enough to test the Triple Crown waters, so as a late bloomer, he is a super-horse in training, 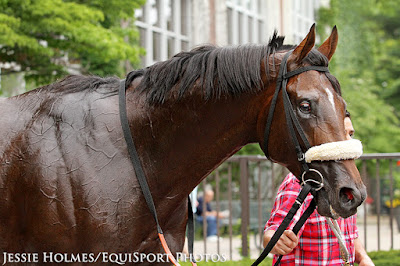 Effinex, post race, with lightening in his veins.  His eyes appear almost glazed and vacant.  He is spent after giving everything. 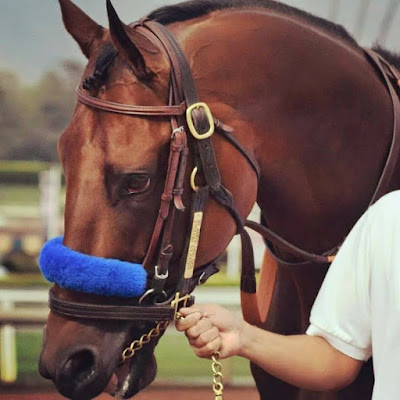 Two words: American Pharoah.  Nothing more needs to be said.

And I've saved the best for last (If you don't count American Pharoah.). 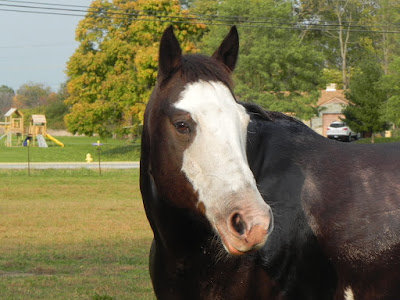 This is my beautiful girl fresh from a bath, but still wearing a dirty face, courtesy of a weed in our pasture that goes dormant every fall.  At fourteeen Callie has never been able to give everything that she has to offer because of a chronic navicular problem, aggravated by her foot stomping fly dance during the summer.  I hope to give her relief this year with two injections of Osphos, a drug whose specific purpose is to relieve navicular distress.  The drug can lead to colic, so I have every finger crossed.

She is unbelievably powerful, a bit stubborn and given to atmospheric bucking when her thoughts on an issue go unresolved.  I have never ridden a horse that is so responsive.  You have only to stay centered on her long back and think about what you want from her.

Callie is playful, winding up my other mare, Stormy Monday, whenever she takes a notion to.  She is loving and affectionate and I can only hope that Osphos will be a blessing to my good and kind friend. Oh yes, she likes to eat and will defend her vittles from her domineering sister, Stormy...so long as there is a gate between them. 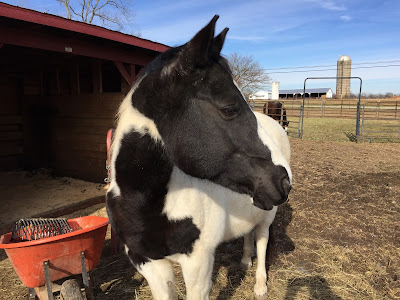 
Her name fits her. Stormy, my pint sized registered paint horse, thinks, connives, remembers and gets even.  She is a second hand rose that no one could do anything with, but she was looking for someone to trust, someone strong enough to endow with the title of herd leader.  Though she never stops testing me and never will, I've gained her trust and that means a lot to me.

Stormy is difficult to ride, her trot is killing, because she has a short wheelbase, but her slow canter is worth whatever the cost might be.  To watch her canter or gallop freely is like watching Astaire and Rogers, or Gene Kelly in Singing In The Rain on the silver screen.  She is that graceful.  Stormy needs an experienced rider, but if the rider begins to daydream, there is a price to pay.  The price, she assumes you are no longer in control and so she must be.  Stormy will tolerate no passengers.

As I said, she can be difficult and quite often her eyes are as hard and edgy as they appear in her picture. Romance her, but don't bribe her and she will be putty in your hands. Well, you can bribe her just a little if it makes you feel better.  If she knew how predictable and funny she is she would be mortified.  There is no other like her and I am glad for that.