But Aren't I Your Horse?

July arrived for a second time in September this year.  The sun is intense and direct, pointed like a finger stabbing at your chest.  If you shake a box of corn flakes (you pick the brand) you'll hear the sound of feet shuffling through the brittle grass of yards begging for water.  Storm clouds build, then fritter away the afternoons, gliding away across the sky on hot breezes that become still at sunset and dissolve, only to reform the following afternoon.  And the flies!  The flies are a plague now as they too search for moisture.

The raspberries have come and gone and are replaced by the fruits of early fall, green apples, quinces and small, brown ripening hackberries.  Callie stands on her long muscular back legs to reach them, gorging herself, just as she does in the late spring when the mulberry trees bear fruit. The berries are tasty but are mostly seed.  Stormy, though, still prefers grass to berries and she delights in a bit of poison ivy.  Carol, wildly allergic to poison ivy, only has to pet Stormy to develop a rash that festers and oozes. 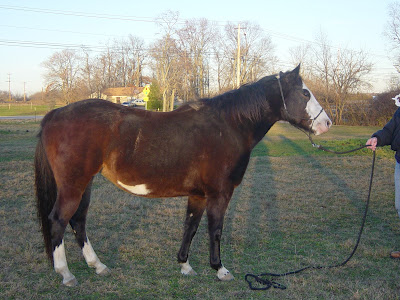 Callie in her winter coat looking a bit like a fuzzy stuffed toy.

Until recently we have had so much rain that we began to complain, all the while knowing that sooner or later our dry season would come.

Stripping away their fly sheets late in the day brings a nearly audible sigh of relief from both horses. Bathed in sweat, Callie, a dark bay, is nearly black.  Her pretty face is a mass of bloody spots, peeling skin and scabs from rubbing her itchy, sunburned face against the closest stationary object.. Quite often it is me that she uses a rubbing post.  Being selectively head shy, she won't allow me to spread a soothing salve or sunscreen on her tortured face.  I feel sorry for her, but beyond putting a fly mask on her, which she gladly accepts, I can do very little to make her feel comfortable.

Stormy drops to her knees and rolls back and forth, back and forth, using her head as both lever and fulcrum to scrub away the days sweat and fly spray.  Snorting and jumping to her feet, we are sometimes treated to an exhibition of farting, running and a horse in the throes of joy that only a good kick in the air can bring,

The air is alive with insects of every kind it seems,dragonflies, paper wasps and low flying, meat eating deer flies,  While fewer in number than the rest, the deer flies are large and determined to have a meal of flesh and blood.  Even a direct hit sometimes only disorients them.  Falling to the ground after a solid cuffing, a deer fly, tough as a cob, takes only a moment to regroup and fly away.  Only the most nimble and determined of us can bring a just end to the misery a deer fly can inflict.


It was on just such an afternoon recently that I tacked- up Callie, her dark bay coat nearly black with sweat, for an hours workout.  Seeing the training halter in my hand, she hustled to the back side of the stable, but being lazy to the bone and a firm believer in energy conservation, she circled our small red stable once, then walked to within a foot of me and bowed her head.  It took just a moment or two to tie the halter. 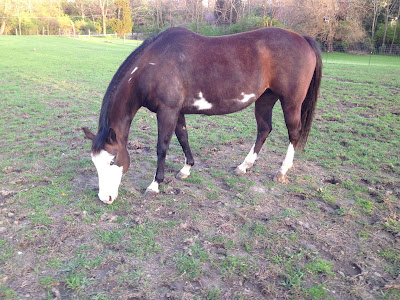 Where there is a blade of grass to be eaten, that's where you'll find Callie.

Callie is the sweetest horse I have ever known?  She is without guile or grudge, unlike her stablemate Stormy.  She is a "pleaser" by nature.  Under saddle she is feather-light, responsive and not reactive. But she owns her faults and they can be consequential.  If her feet are stuck, she normally will protest by rearing.  Once I lost the reins when she pawed the air and only a handful of her mane, good luck and a seven-inch cantle kept me in the saddle.  And if she has had enough, enough of anything, she will buck.  That is BUCK!  Really big ones, the kind that show her belly markings to anyone who might be near enough to see them.  But allow me to defend my big girl by saying that the more she is ridden the more she learns and the less inclined she is to those antics.  Remember, she's been babied because of her navicular distress.


When the weather is hot and dry and the air buzzes with flies, Callie wears orthopedic boots to ease the pain as she pounds the tabletop-hard dirt to shake off her tormentors..  The boots make a curious "galumphing" sound when she trots or canters, a sound that always makes me laugh.  Her summer trousseau usually consists of a quality fly sheet with 95% UV protection, a fly mask and, of course, her boots.  I might buck too if I were her.

While I finished tightening Callie's cinch, Stormy stood dejectedly off to one side, her head lowered in an almost submissive way.  The softness and sadness in her dark eyes indicted and convicted me.  Before I could speak, she nickered softly to me in a way that only her best friend would understand, "Hey, what about me?" 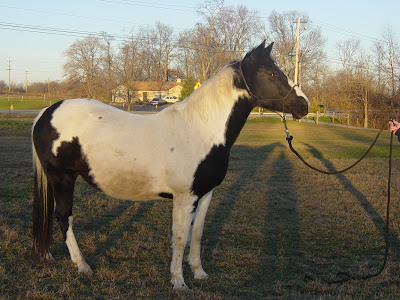