And So The Story Goes

Her owners thought that because she was small she'd make an ideal horse for their teenage daughters, neither of whom had any experience with horses.  How wrong they were. Threatening and generally uncooperative, she buffaloed everyone from father to youngest daughter.  She was a black and white terror who convinced everyone to leave her alone, preferably with plenty of hay and grain.  Stormy soon became available for purchase at a good price.

When I bought Stormy she came with plenty of emotional baggage and the weight of a story or two that may or may not have been true.  For instance, her name: Stormy Monday.  Her breeder, a client and friend of my wife Carol,  swears that on Monday, April 3, 2000, the day Stormy was born, sliding easily into this world, there was a thunderstorm.  Weather records indicate .64 inches of rain with the day's high temperature reaching 63 degrees,  a warm day for early April in southwestern Ohio, where it is normally wet and bone chillingly cold in the spring.  With over a half inch of rain there could well have been a storm, but nothing I've found says yes or no. 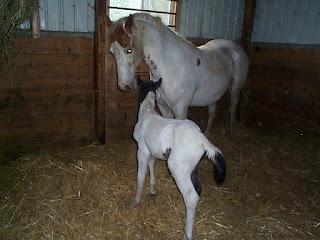 Fox Now, her mother,  and Stormy not long after she was foaled.  You can see how muscular Stormy was at birth.  I've always thought that Fox looked a little irritated in this picture. 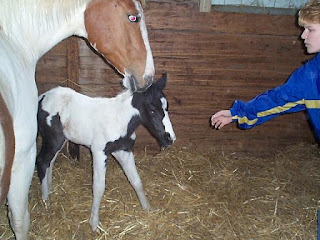 Fox, Stormy and Carol's friend, Kelly.  Kelly appears a little concerned that Fox might be an overly protective mother.

I called my wife's friend, Kelly, Stormy's breeder.  That was just a figure of speech that let me get on with the next tale, because Kelly told this story, and if true, Stormy is just another of life's quirky accidents.

It seems that Kelly's horse, Joe (Box C Black Leo Joe),  had just been snipped, gelded if you will, about the time Stormy's dam, Fox Now, came into season.  Joe, standing over sixteen hands and always a stud, allegedly jumped a four foot horse fence and impregnated Fox Now.  Possible, I suppose, because even a half loaded pistol is still a lethal weapon and stranger things have happened in the horse world. 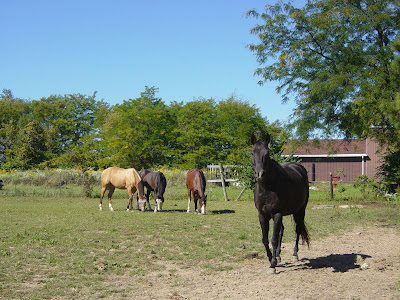 The horses in the background are Kelly's dun horse, Dusty, then Callie, and my horse at the time, Wyatt.  Wyatt and I were still trying to work out our differences and Stormy was still in the future. 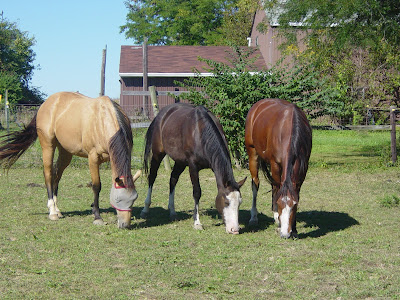 This is such a great photo.  If you begged and pleaded, these three would never have lined up just this way nor this perfectly.  This picture was taken just two months after we bought the horses.  You can see how small and immature Callie was.  Dusty and Callie paired up and after a physical debate in which she gave as good as she got, Wyatt and Joe partnered.

Carol and I took Stormy back to Kelly's to board and to test drive her for a few days. Kelly thought it might be a great idea to reintroduce Stormy to her sire, Joe.  She convinced me to put both Stormy and Joe into her round pen.  What could go wrong?

Joe, the nightmare stud horse appeared.  To Joe, Stormy was just another horse to be whipped into shape, subjugated and added to the herd.   He did not appear to recognize her, his only thought was to break her and break her he did.

He snaked his neck and bared his teeth and then, sniffing the air, he chuffed and screamed a cold, chilling stallion scream and cutting off Stormy's retreat, bit her savagely just to the left of her withers. Her hair was peeled back and Stormy's pink skin showed a bite just deep enough to reveal a raised welt where the separations between Joe's front teeth were.

Young, terrified and inexperienced, Stormy, her own screams piercing the coming night, tried to run from Joe, but there was too little room in the round pen to maneuver and Joe's attacks were bold and savage.  Her white hair fell in tufts to the ground like the milk weed seed's feathery parachute.  She kicked again and again, her rear hoofs slashing the vacant air until she was too tired to run or fight anymore. Something in her began to give way and she slowed, resigned I suppose to die.   Stormy had done all she could do against the bigger and more experienced horse.

How we separated Stormy and Joe I simply do not remember.  But I do remember a trembling sweat-soaked little horse pressing its head close to mine.  I must have been unconscious or just stupid to have let this happen.  I wish this story were not true, but it is, too true.

These were just moments in her very young life.  Stormy will always be Stormy, she wears the name well and most would have given up on her, sold her and moved on.  But my devotion to her and her trust in me is our bond and she is my forever horse.