Another Winter's Day, Horses and A Coyote

"A winter's day, in a deep and dark December..."*  Seems like I am always moaning about the weather.  It is cold today and the air is raspy and ragged like a file. It's damp, a sly dampness that penetrates your boots and arrows its way to your knees.  Soon you realize that you are just cold, cold all over, and your mind begins to drift ahead to the hot cup of tea you've promised yourself.  All of this misery and it's just thirty degrees.  I've been warmer at ten degrees below zero.

The sky is a seamless soup, the color of old bath water and the remaining snow that hides in the leaves or just under the pasture gate is a pockmarked froth.

As my wife, Carol, said recently on her Facebook page, "Every day begins with the horses and cats." That's just the way it is and today is no different.  We take the truck, my old faithful Dodge Hemi, eleven years old now, but still a workhorse.  I add three bales of hay to the tailgate and drive across the lower part of the pasture, hoping I'm not leaving a rutted trail behind me. 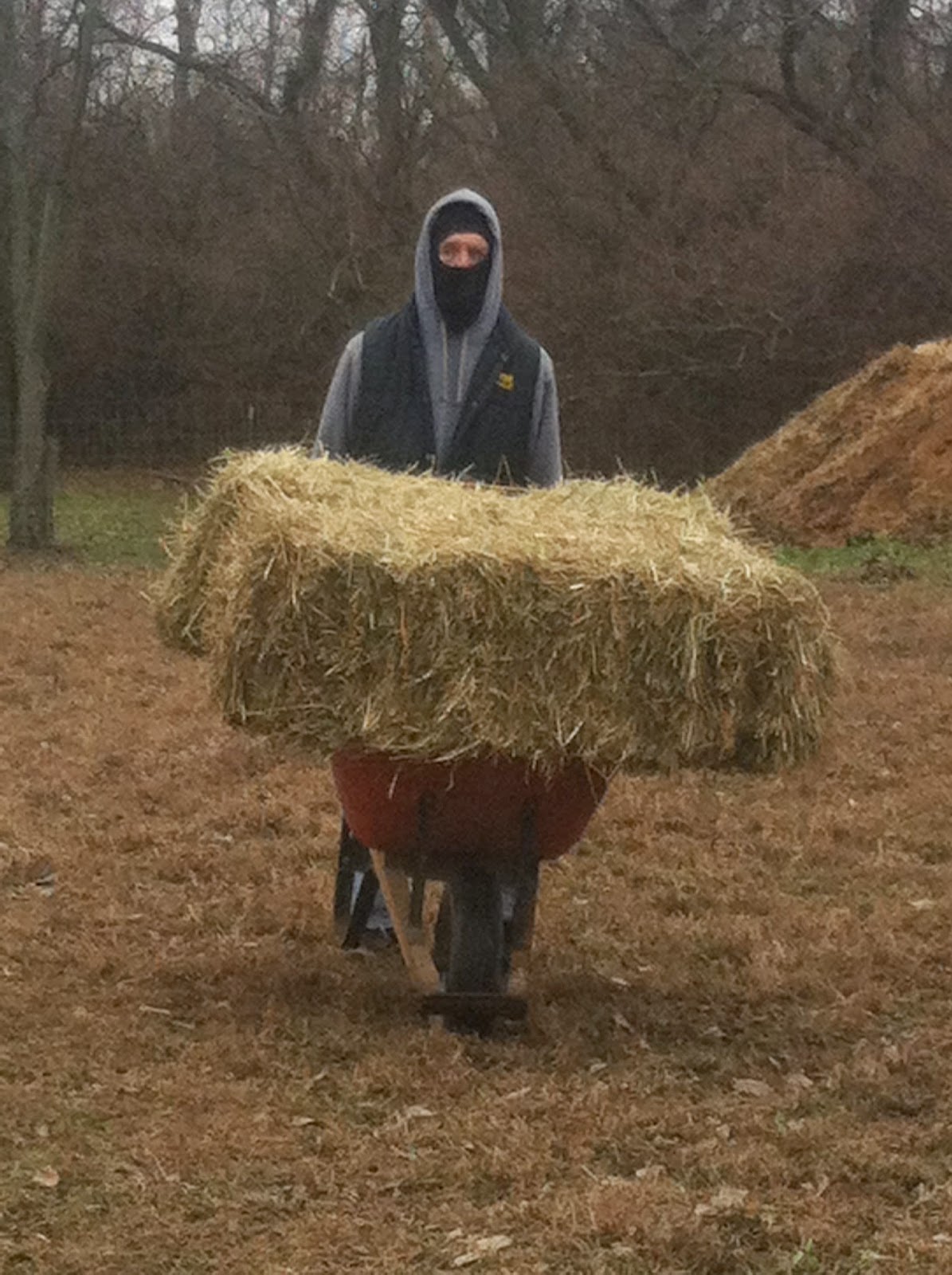 Isn't this what the horses are supposed to do?

Today's load is large: eight bags of bedding, one hundred pounds of feed and the hay.  We feed, water and clean up after the girls and drudge the truck's load to the feed room in the wheelbarrow.

I use a three wormer rotation on my horses and today Stormy and Callie will each get a dose of Panacur.  Stormy is an easy horse to medicate, she sucks on the syringe and is on her way, just the way she is when the vet gives her shots or draws her blood.  Callie is usually a head-tossing diva when it comes to taking a dose of wormer, but today I gave her a treat or two and when I rub her mouth with the syringe she opens up and...all gone!  Wow, that was easy.  Give credit to Carol whose patience in dosing Callie has been greater than mine. 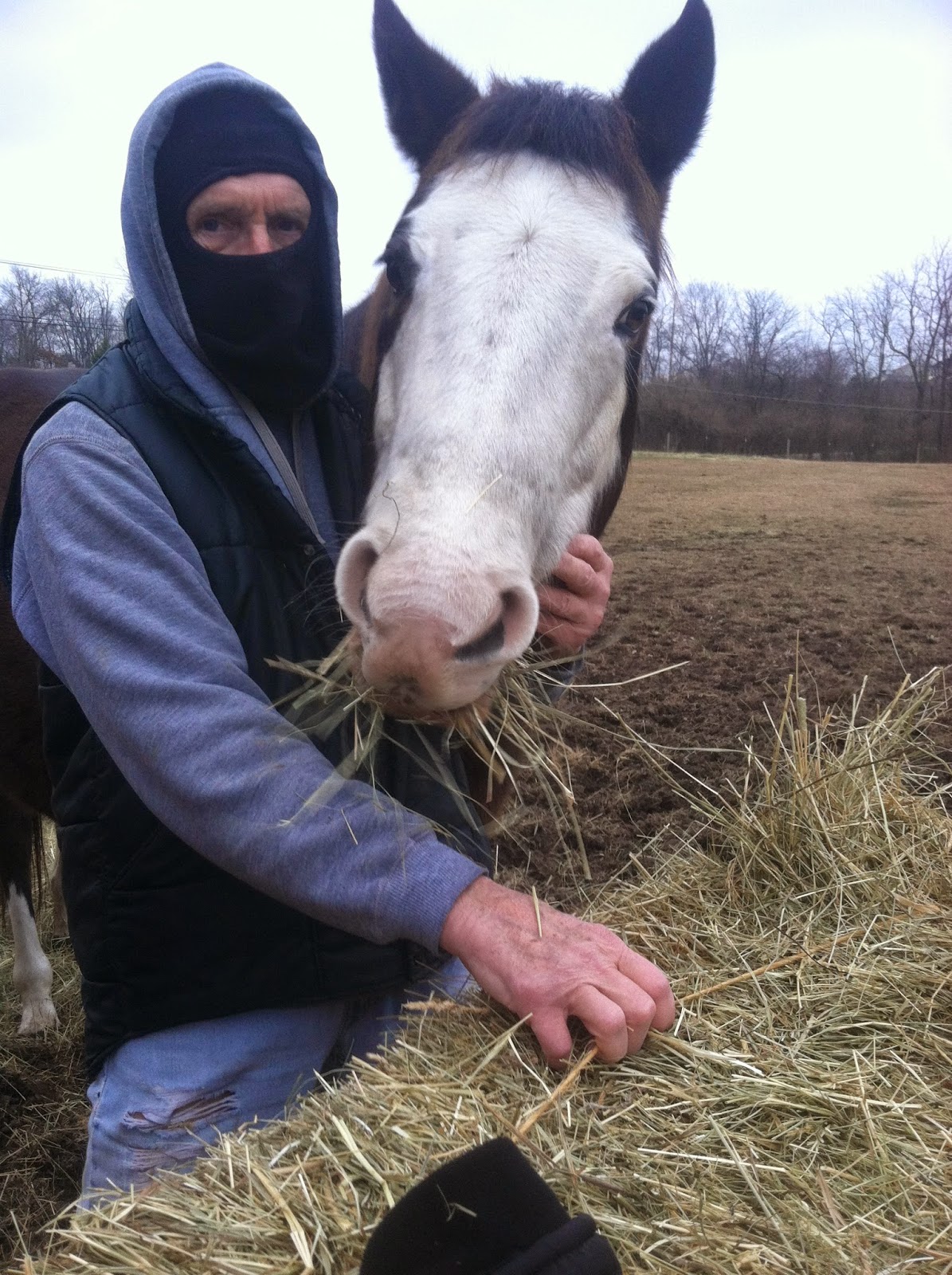 Stormy trotted along beside me when she saw Callie's syringe in my hand.  No doubt she'd figured a treat must be hiding somewhere in the folds of my sweatshirt.  She was right, of course, but no sooner had I finished with Callie, when Stormy, who had been facing Callie, wheeled 180 degrees.  Her movement was so swift and fluid that I felt her absence before I realized she had gone. 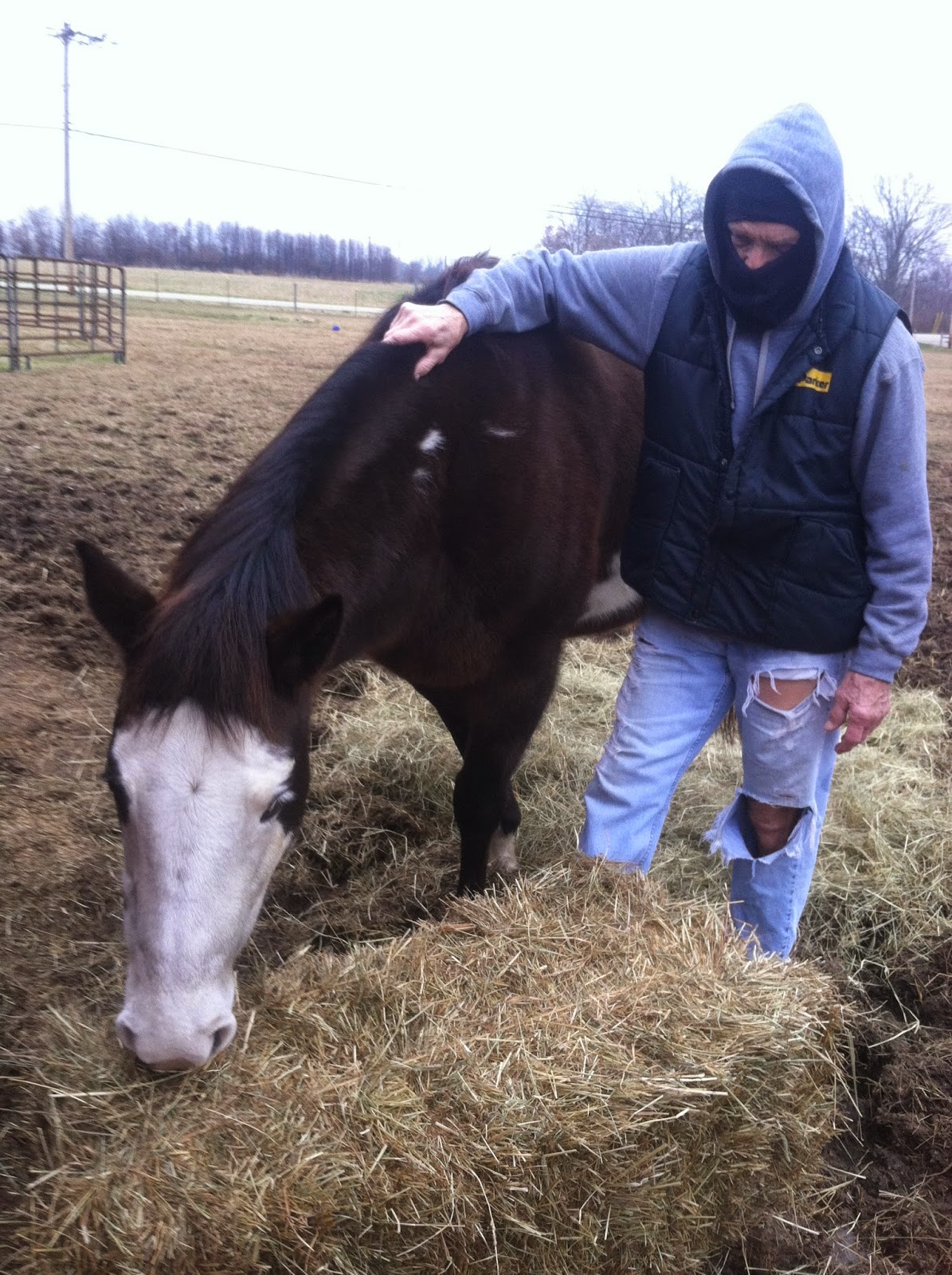 Someone might pay big money for my jeans, but I think I can still get a little more use out of them,

Stormy charged toward the pasture fence that runs parallel to Princeton Road with Callie close behind, their ears pinned straight ahead, tails aloft and feet scarcely touching the tacky ground they were crossing. A coyote, a big one, maybe the biggest I've yet seen, trotted in its straight line predatory way across our neighbors alfalfa field.  Prey animals, the horses dark eyes followed the coyote with their bodies rigid and electric, ready to fight or flee.

I watched the the coyote's rusty winter ruff flow like wind-blown grass across its shoulders. As it trotted, the coyote never veered from its path.  When a white service truck slowed to have a look, the coyote slowed as well, raising its head, its yellow eyes watching.  When the truck passed, the coyote dropped it head and ran faster than I could have believed possible, crossing Princeton Road and angling out of sight.  In the truck the coyote saw a threat and its eyes never left it until it drove out of sight.  The coyote never seemed to worry about the horses that were now in full flight.


Stormy began her breathless run from among the blackberry bushes on the fence line, making huge sweeps around the pasture.  She screamed frantically, much as she does whenever she is excited, but there was animal urgency to it now.  Every time she passed by me she flattened her ears, why, I don't know.  I watched her change leads over and over again without slowing.  Callie, feeling Stormy's stress, began bucking and kicking, her breath roaring through her nostrils.  I was trapped against our round pen fence as she did.  I  expected to be kicked and kicked hard, but with all four hooves in the air, flailing and pounding the soft ground, she changed her direction and slashed the air on the side away from me.  She had purposely avoided me.  Her soft eyes told me so. 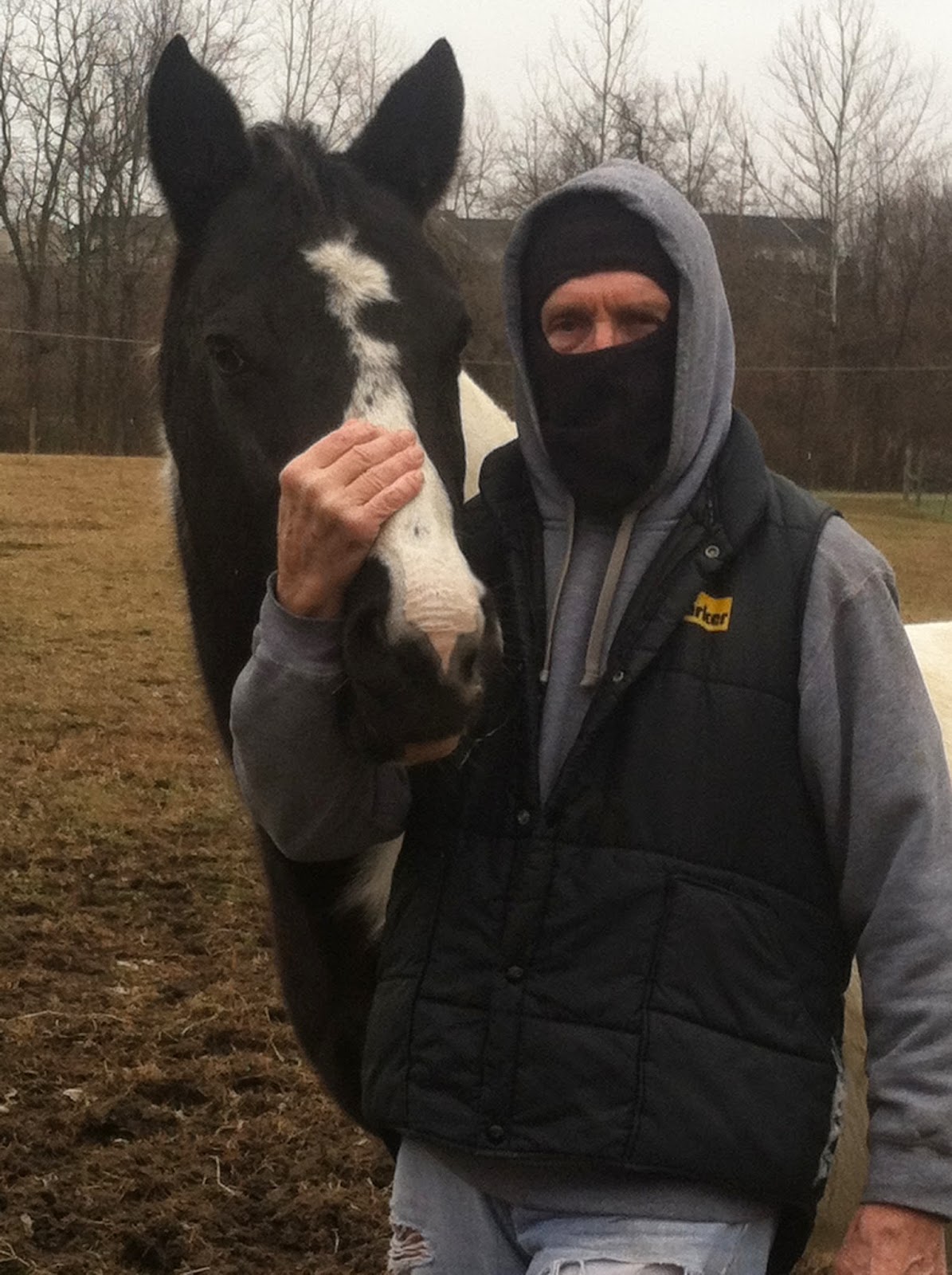 My hand is on top of her nose to keep her from throwing her head.  I like the way Stormy looks in this pic.

After two or three minutes Callie, tired and wet with perspiration, ground to a stop and began grazing once more.  Very soon Stormy stood with her.

*I Am A Rock by Simon and Garfunkel