Beyond his Australian accent, killer smile, and sly humor, you'll find Dan James, the horseman.
The horseman, Dan James, succeeds by relentless attention to detail and he tries to instill that focus into those who attend his clinics.  Dan is one half of Double Dan Horsemanship, he resides in Lexington, Kentucky, while his friend and partner, Dan Steers, holds down the fort in Australia. 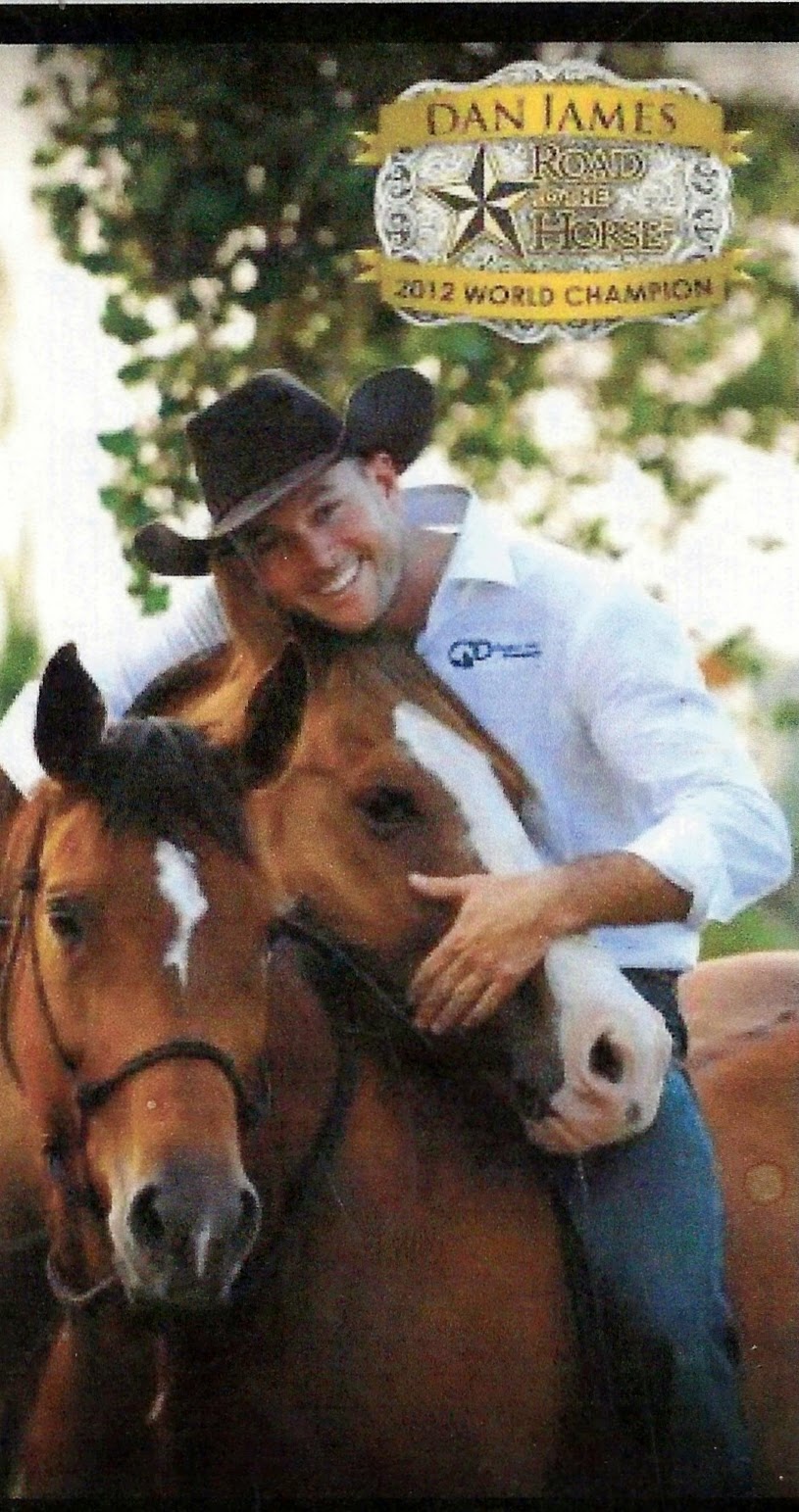 James' reputation continues to grow with wins and highly placed showings at events such as the 2008 Way of the Horse at Equitana Asia Pacific, a highly popular win at the 2012 Road To The Horse with fellow Australian, Guy McLean, a fourth place finish at the 2013 Mustang Millions riding Smart Little Mustang (know by his barn name, Punk, this mustang died of colic in February of 2014) and by winning the 2014 Kentucky Cup Freestyle Championship on Smart Little Elan.  You can see both of these rides on YouTube by typing in, Dan James.  I guarantee you will be impressed by both his ability and his creativity.

James is well known for Roman Riding and for his astonishing work with horses at liberty.  Not to be lost in all of this is his exceptional skill as a rider.  My horse's trainer says that above all else, Dan James is an incredible rider.

Within minutes of introducing ourselves at the start of the clinic, James had made the connection between faces and names, an art form at which I've never been very good.  From then on he never failed to call anyone by other than their correct name!  And he made it clear from the beginning that we would work hard, stay busy and that he would spend time with each of us.  He reminded us that we had invested time and a considerable sum in his clinic and that we should try to take away from it as much as possible.

This was a ground control clinic that would stress five elements: flexing the horse for softness, circling the horse around you, backing the horse, the side pass and disengaging the horse's hind quarters.  We were quizzed repeatedly on each of these five elements as a part of that attention to detail.  Each of the exercises was done quietly without raising a cloud of dust and while remaining almost stationary near our horse's shoulder.  James was looking for movement from the horse and not the horseman.  By the way, the experience level of those in attendance varied from rank beginner to very proficient riders. 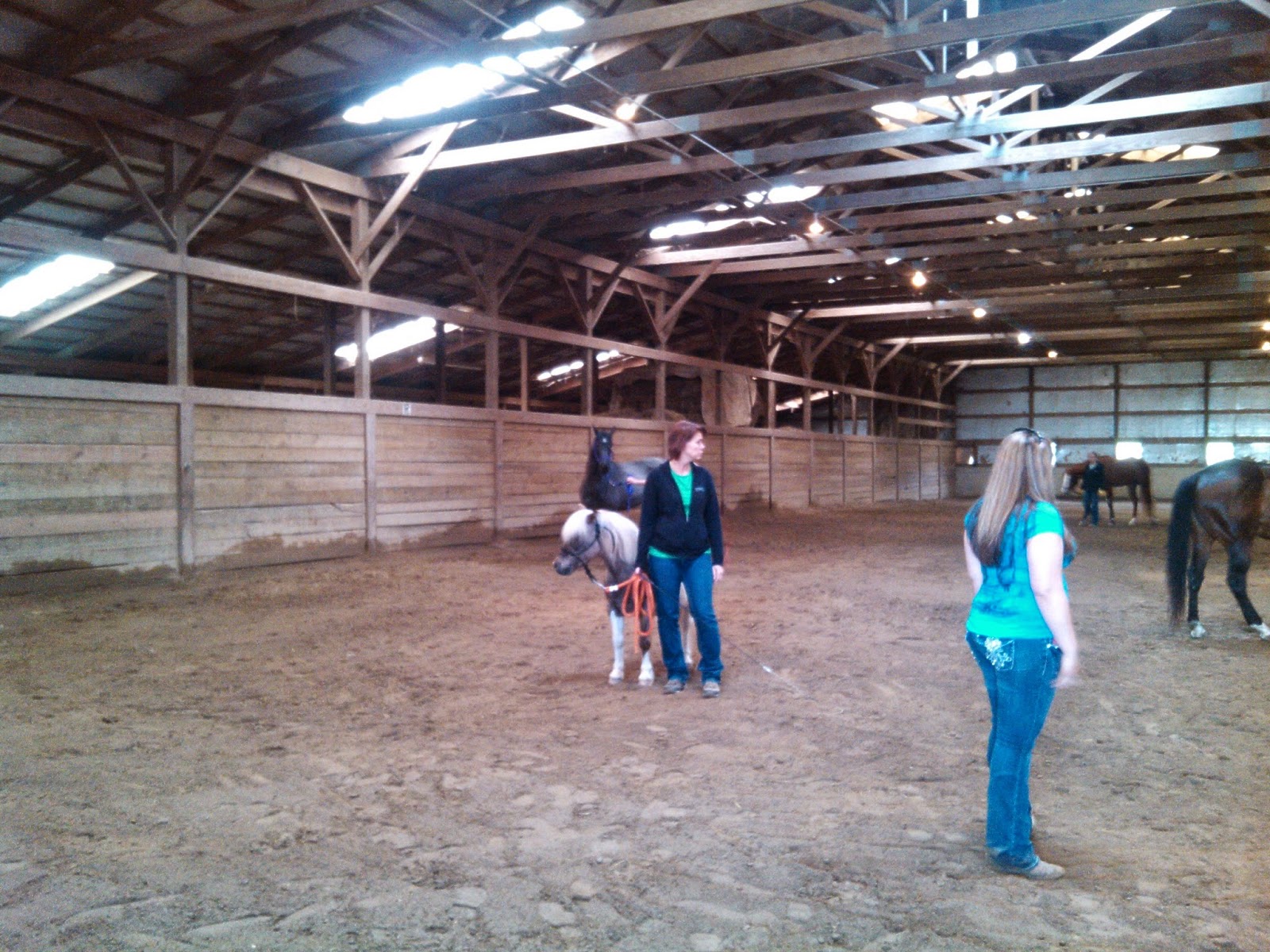 One horse relentlessly bullied its owner to the point of being unmanageable.  Taking the horse's lead rope, James, carriage whip in hand, asked for a response from this rogue horse and when he didn't get the proper response, James backed the horse from one end of the 200' arena to the other and back again.  The happened over and over until the horse began to give the desired response.  Finally, James handed the lead rope back to the owner and joked that her horse might have a few "knowledge marks" on its ankles, but not to worry about it. 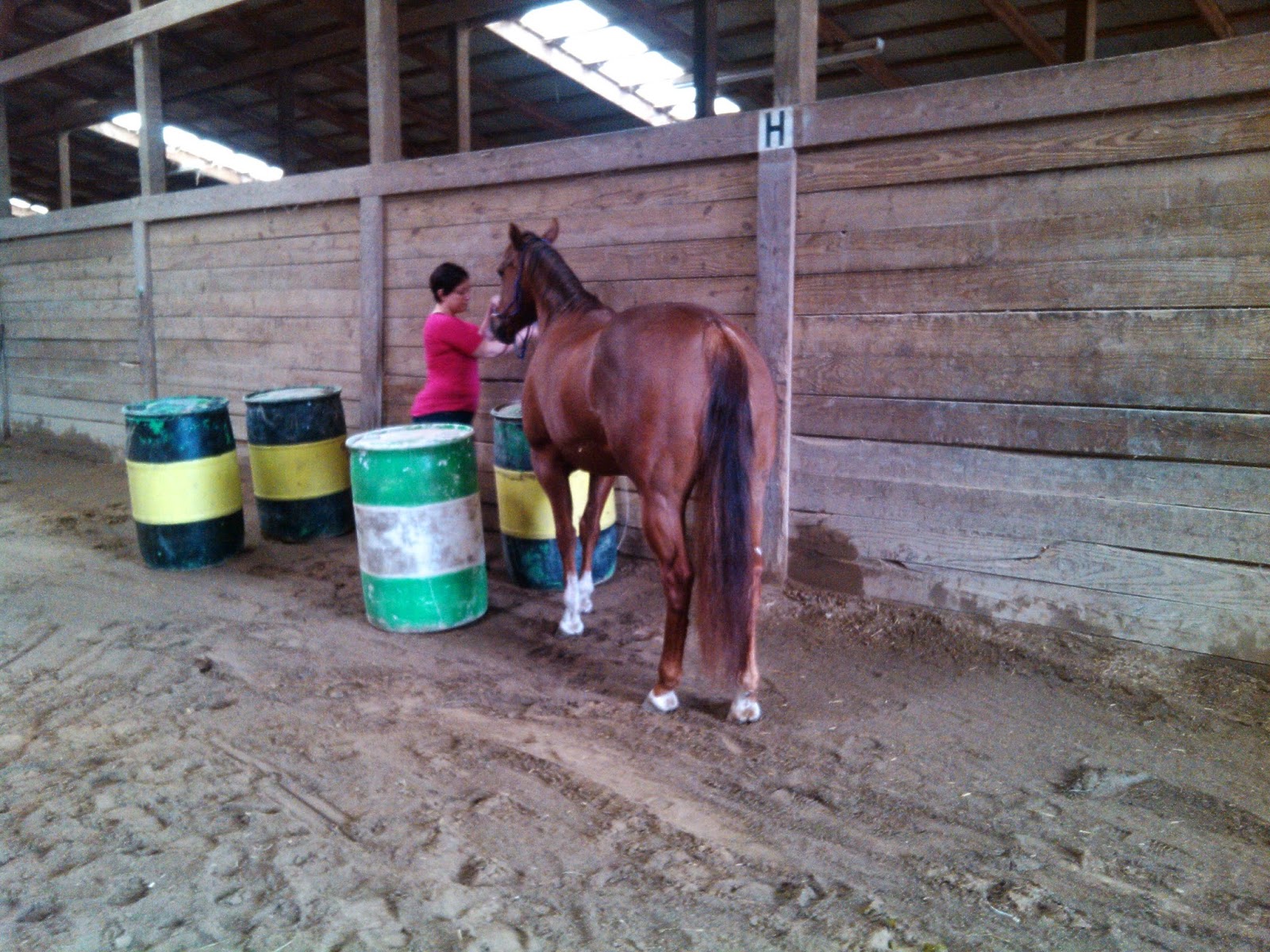 My clinic partner, Sarah and her horse, Tank.

James did spend some time with Stormy and me.  He wasn't fond of the way I backed Stormy up using a Clinton Anderson method.  Instead, he had me hold the lead rope just under Stormy's jaw and by putting pressure on her nose cause her to step back.  When she did, I released the pressure which was her reward.  He loved Stormy's side pass and seemed satisfied with her overall groundwork.  Stormy is a smart little horse and is pretty good at groundwork, but she hates it with a passion. 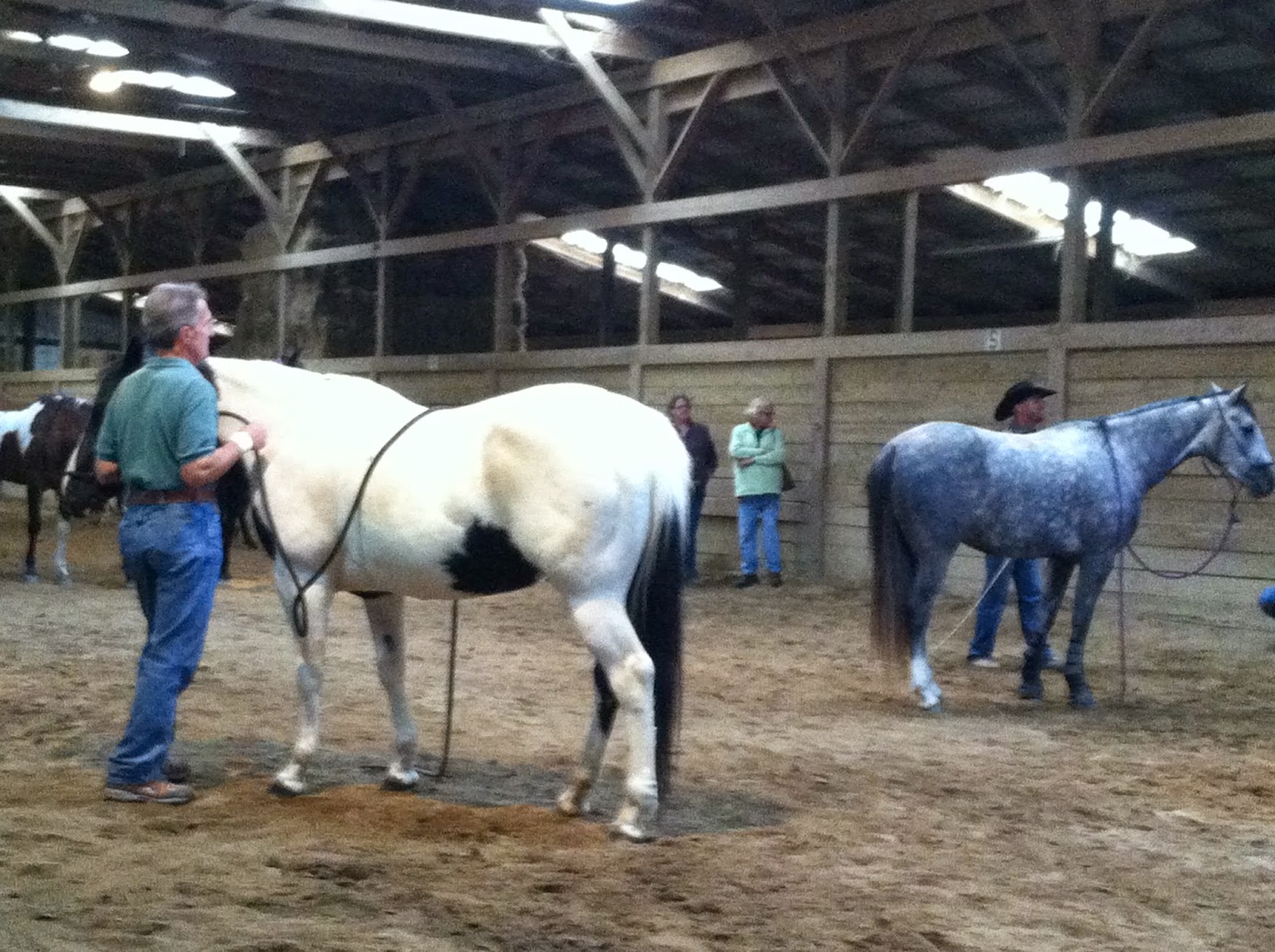 Stormy and I watch Dan James and his horse, Swampy. 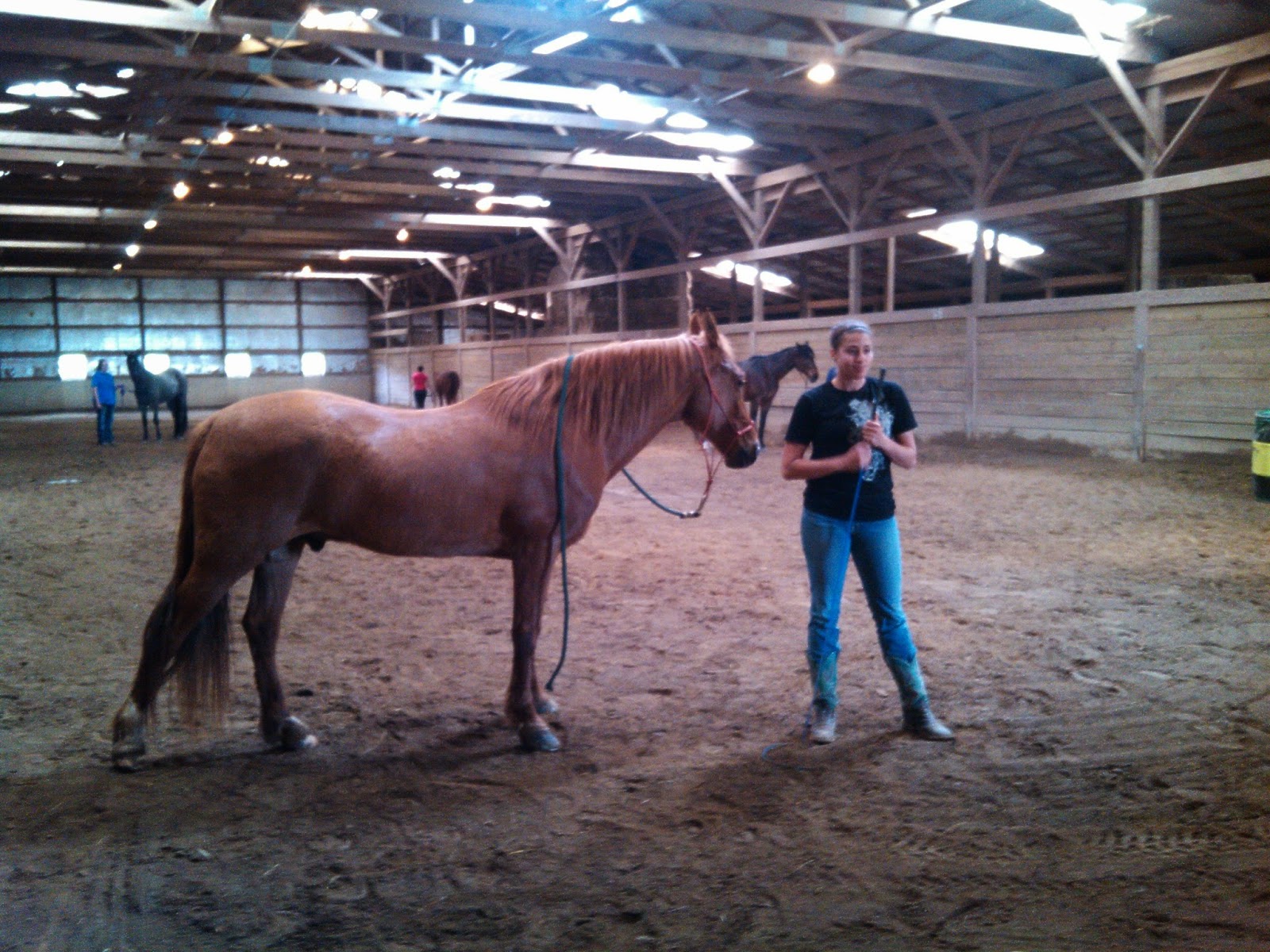 Jessica was test driving this leased gelding.  She is a great rider. 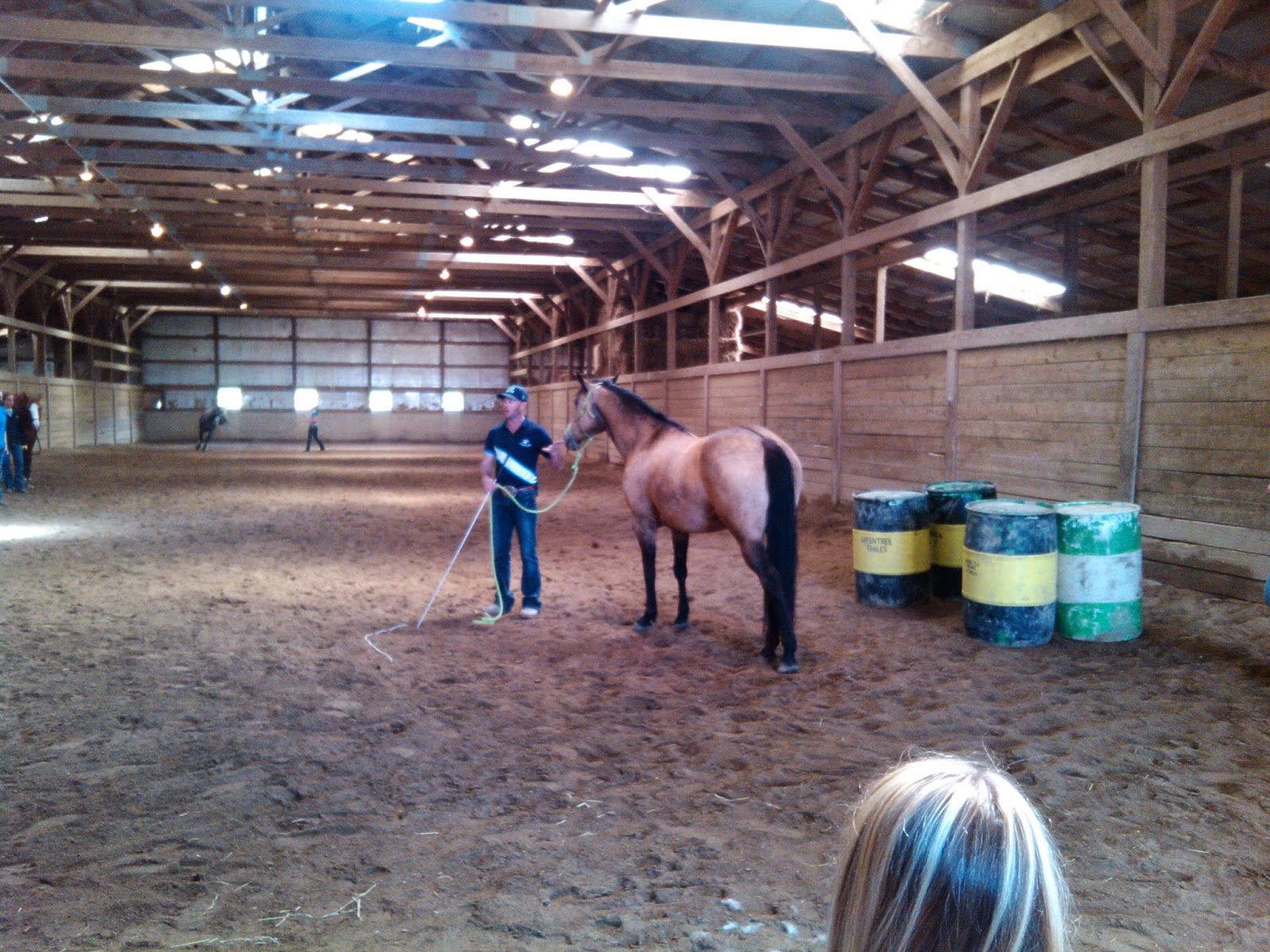 Dan James with one of the student's horse.

But...it was Stormy's attitude that got us into trouble with Dan.  Stormy is a high energy horse and bores easily, and when she is bored or impatient, she paws the ground.  Twice James told me to, "Get after her when she does that."  I'm so used to her pawing that I seldom notice.  But it was at the end of the day when he asked to gather around in a semicircle that brought us some unwelcome attention.  I had tried to keep her away from the other horses the entire day, because as dominant mare she has a flair for bitchiness and has a peculiar herd management style.  She will kick any horse that steps into what she considers her space.  And she did, scaring a horse and its owner, who nearly jumped in Dan James arms.  In an icy tone James said, "And Loren, bring your horse along anytime, won't you?"  Ugh!

I wasn't able participate in day two of the clinic because of the serious injury to my wrist and hand sustained while loading Stormy for the trip to the clinic.  Everyone, including Dan James, was very concerned when I arrived wearing a huge and cumbersome splint. 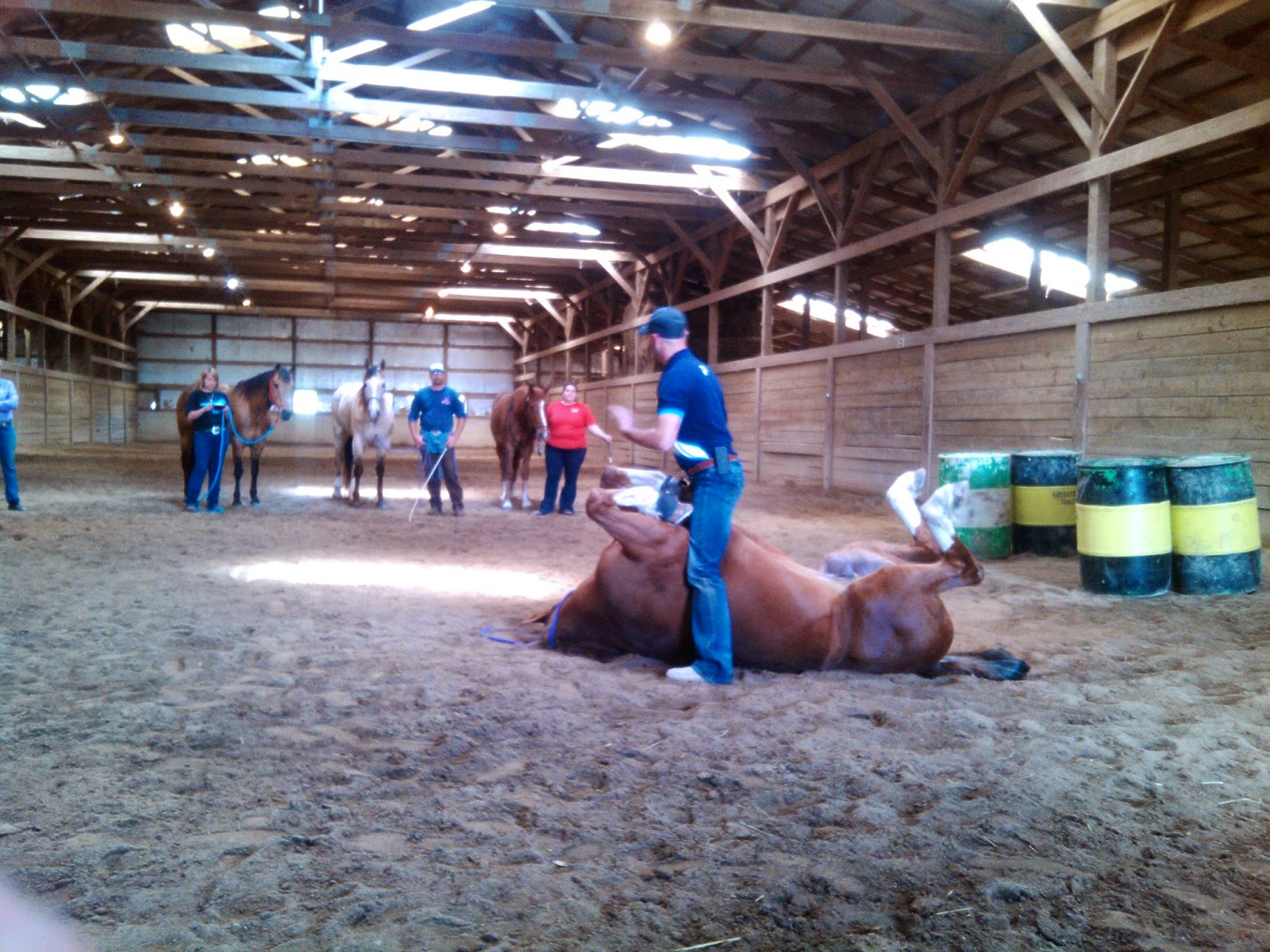 Don't try this at home.

For me the highlight of day two was a demonstration by James and his horses working at liberty.  It was an incredible experience to be seated mere feet away as he put them through their paces using just two cue sticks to communicate with them.  And then, taking his Australian Stock Horse, Amelia and another horse to the opposite end of the arena, he walked, sticks held vertically, to within a few feet of where all of us were sitting.  Dropping the sticks, Amelia and her partner charged at full gallop, hooves pounding, nostrils flared and every muscle straining, directly at us, and at his signal they slid to a dusty stop just a few feet away.  Incredible.  Have I said that already? 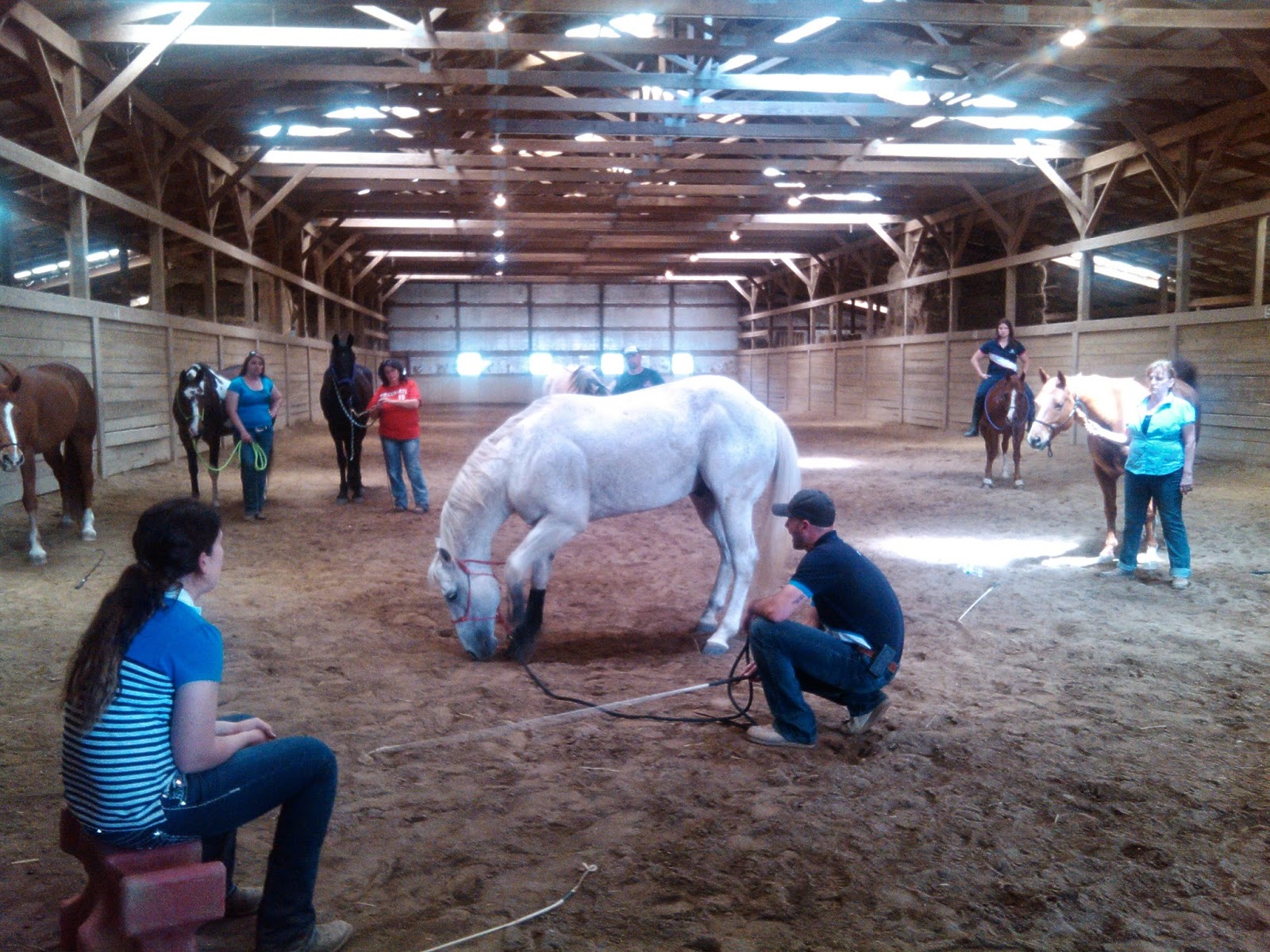 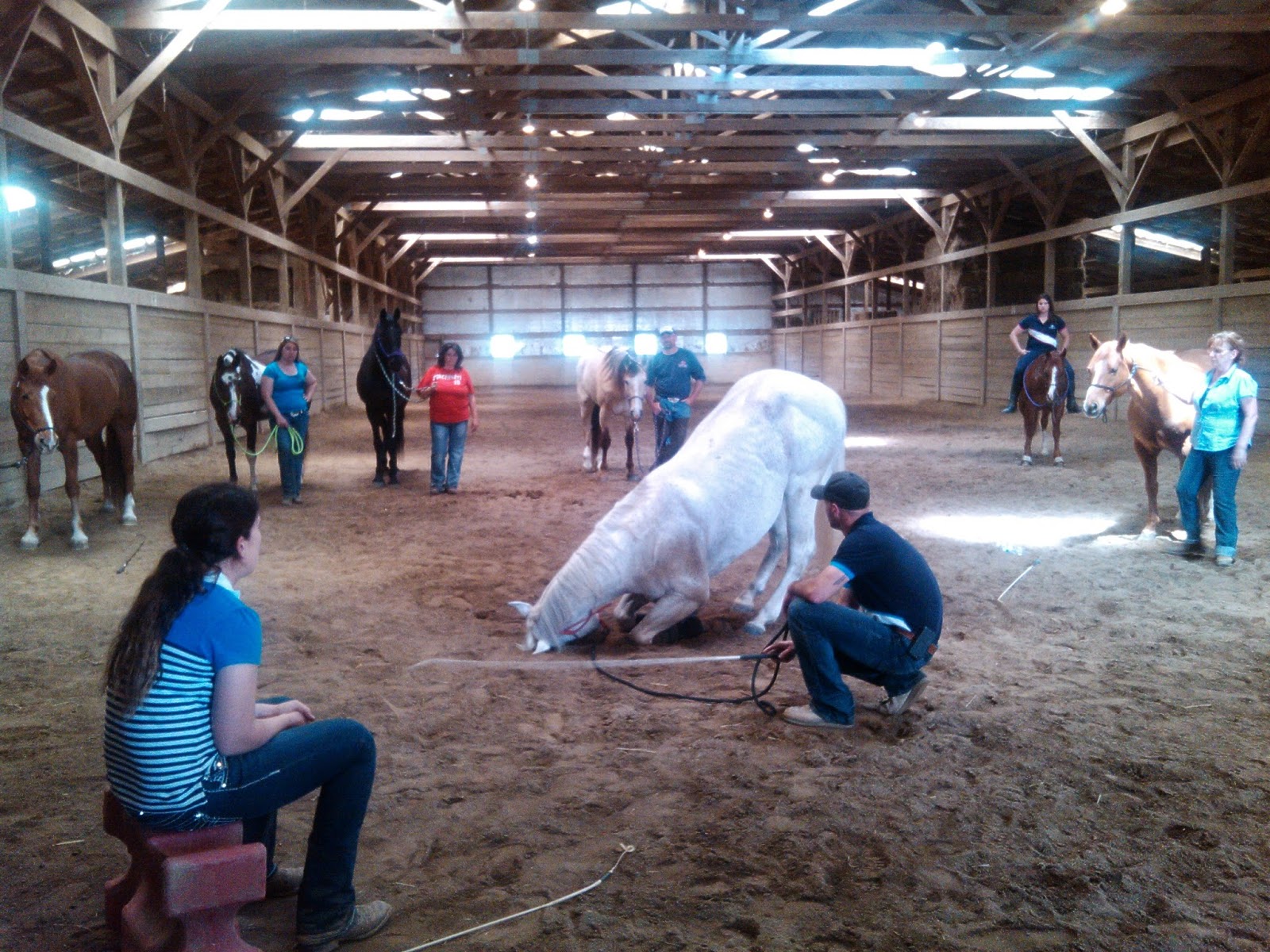 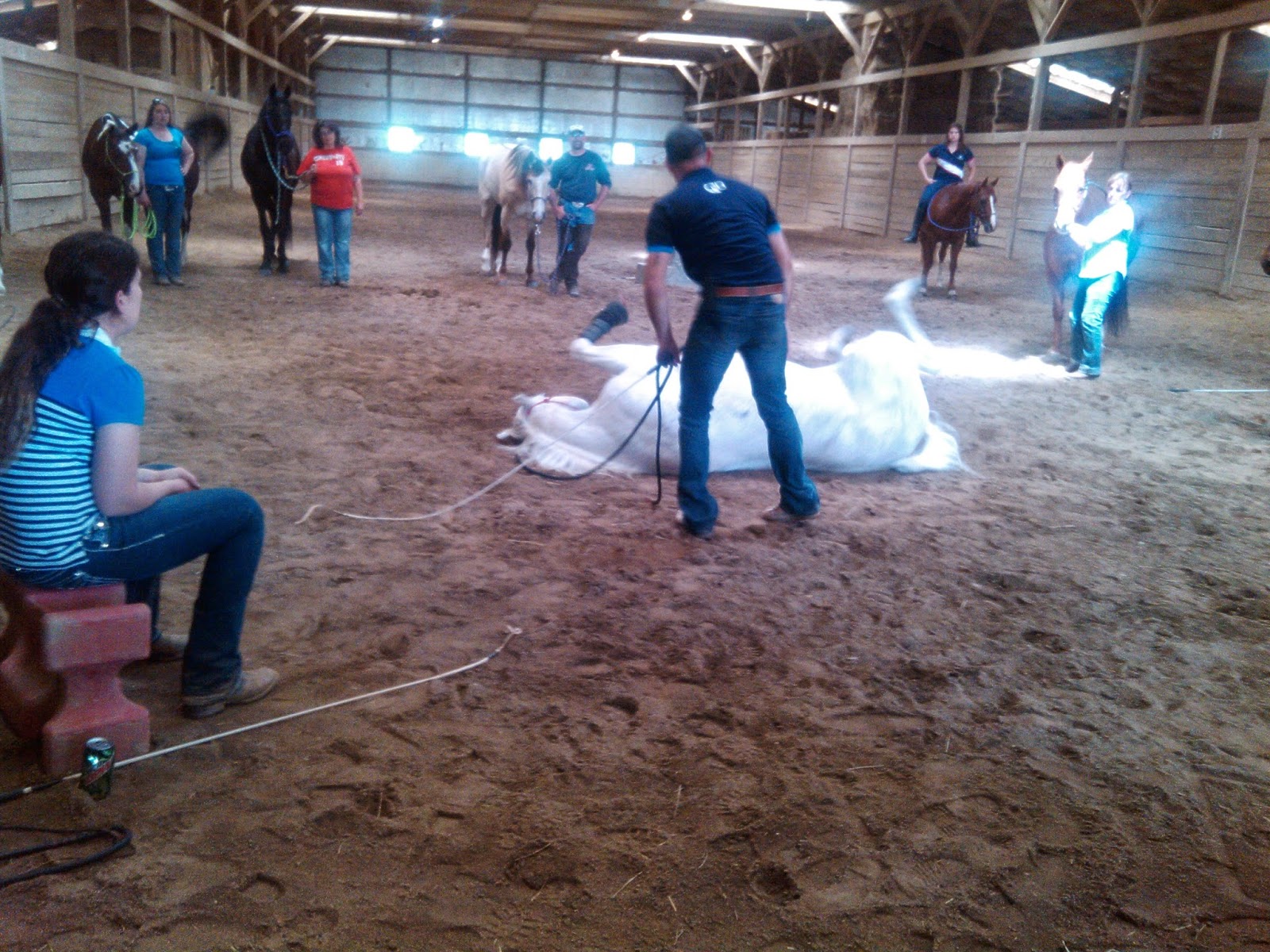 Top Gun coliced and nearly died shortly after this clinic.

Day two was a lot more relaxed and as he watched the second group perform he answered our questions.  Here are some of his answers.

He has several tattoos and the one on his left arm is a copy of the mustang Punk's BLM freeze brand.

He worked for a racing stable in Japan that had 450 horses.  Each day 100 were ridden roughly 60 kilometers or about 37 miles.

The Road To The Horse (RTTH) victory did not have the effect on his career that he had expected.  Contestants pay their own expenses and stay where they are told to stay by the organizer.

From another source not connected to Double Dan Horsemanship, I was told that it is strongly suggested that each contestant buy the horse they used in the competition.  Dan's horse Swampy is a 6666 ranch horse used at RTTH, as is the horse, Ringer, trained by Dan Steers at this years RTTH.  Ringer was purchased by another of Double Dan's interns, Shalise.  Ringer was also at the clinic and like Amelia he is a big guy, just over two years old and at least 16 hands.  Shalise told me that all of the horses from the 6666 ranch are large like Ringer.  From my seat in the stands all the colts seem to be just 15 hands or so.

Amelia, the Australian Stock Horse, does not particularly like people nor does she care for a lot of attention,  By the way, she is a big girl.

Asked why he never mentioned a horses chewing, usually a sign that the horse is learning, he said that he felt the act of chewing was overblown and that he wants a reaction from the horse instead.

He has had too many broken bones to count, including a skull fracture suffered during a motorcycle stunt if I remember correctly.

He worked for his new intern Maggie's father at one time. 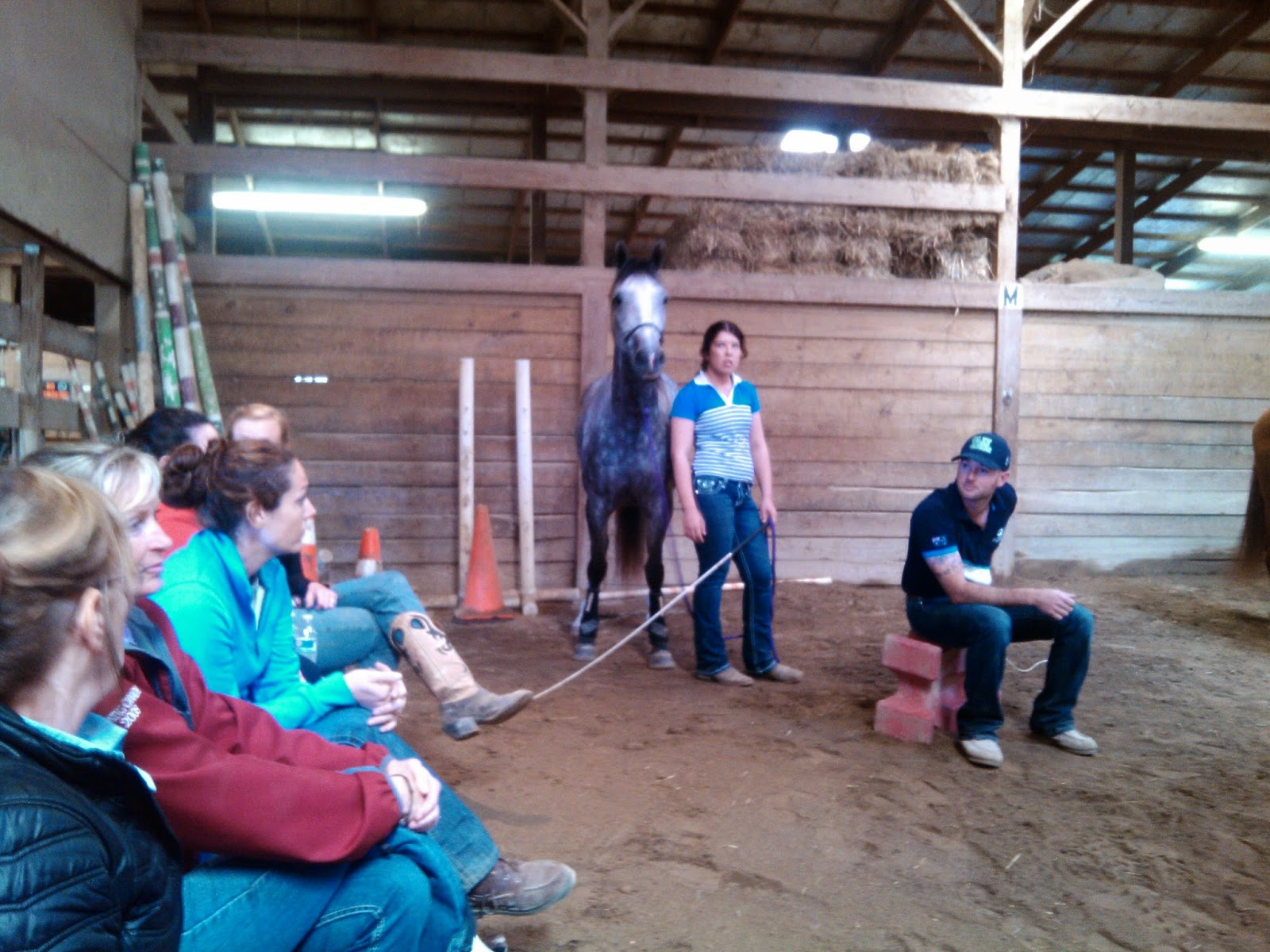 Maggie standing next to Swampy and Dan James.

He worked for six years on a 1.5 million acre cattle station in Western Australia where he was responsible for breeding, breaking and the maintenance of 200 horses.

Like Pat Parelli, many of Dan James' training methods were learned from a circus trainer.