Forgive me if I indulge myself with this entry.  My wife Carol and I just returned from a week on Grand Cayman, where we ate, slept and went diving every day for a week.  We were the guests of our dear friends of many years, Pat and Howard Farr, at their time-share on Seven Mile Beach.

So, here goes.  Whenever we go to the Cayman Islands I have a little trouble getting in to the island's rhythm.  Here I am in black tee shirt, jeans and boots looking a little out of place--but I am smiling. 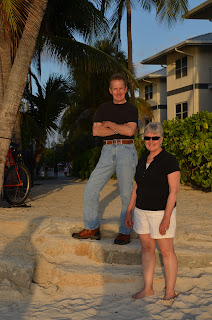 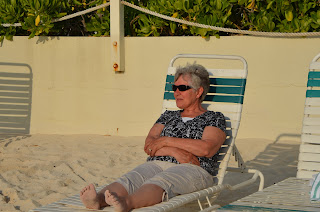 Carol on the beach. 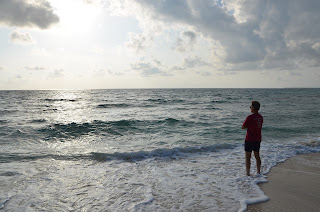 The Man In Red
This photo, taken as the ocean was beginning to boil, inspired this bit of verse.
...out of Africa
We touched the rough cheek of Africa.
Tossed and turned in tumult, rocked in sleepless dreams,
Wind-blown and blue, hurried and unhurried in our time.
We called out to a man in red, knee deep in foaming, rumbling, sunset-surf, listening to his dream.
His dream is of tomorrow and he is resolute.
It is not his time.
Our time is forever,
And we returned to begin again our journey out of Africa.
The four of us learned to dive together in 1999, and here are some pictures of us taken by Howard and Carol underwater. 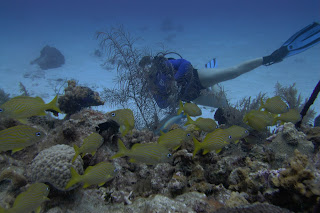 Pat and a school of French Grunts 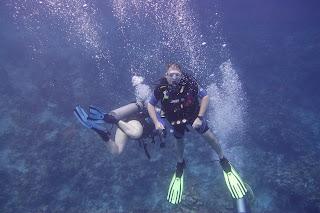 There aren't too many pictures of Howard underwater because he is always behind the camera. 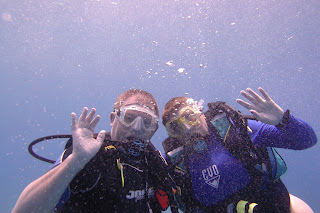 Pat and Howard on the right side of the lense this time. 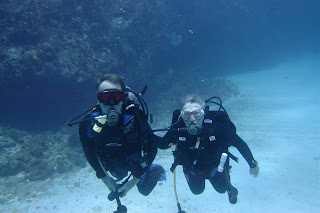 Carol and I at Pallas Arches.  At the surface, after this dive, I nearly succumbed to sea-sickness once again! 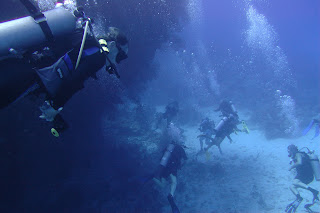 What a dive can look like.  This is a drift dive and that is me in the upper left corner.  All four of us try to avoid the crowds.
What we see: 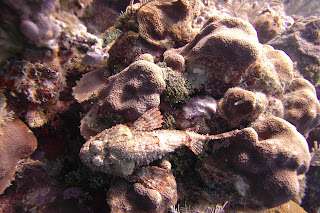 A Scorpion Fish.  Almost impossible to see among the coral. 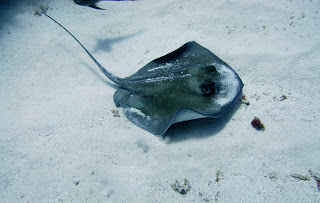 A Southern Stingray.  The females are much larger than the males.
The USS Kittiwake was built in 1944, launched 10 July, 1945 and was a submarine rescue vessel.  It was the ship which found the space ship Challengers black box after it exploded during launch.
There are two decompression chambers on board as well a rack which held depth charges.  There are still mirrors in the bathroom and I wonder about the faces that have looked into them.
Kittiwake was sold to the Cayman Islands and was sunk to become an artificial reef and tourist attracion in January, 2011.  It rests in 63 feet of water. 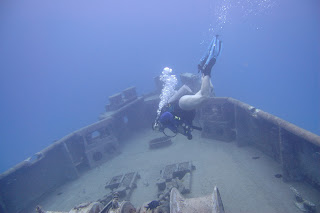 Pat at the bow. 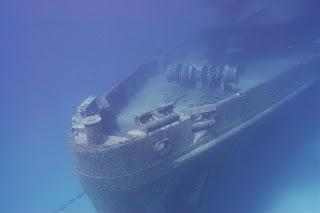 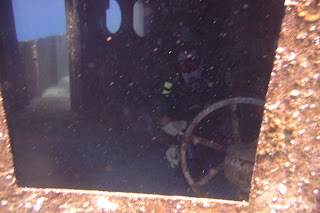 Me at the helm.  No one but me has ever done this.  Sure! 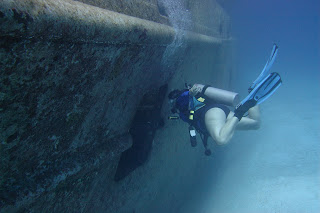 Pat ready to penetrate the Kittiwake.  We swam from stern to bow inside the ship. 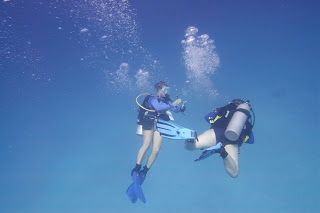 Lucy, our English dive master, and Pat.  I believe Pat has told Lucy that she is low on air and Lucy is making the sign of the hull, indicating that Pat should go back to the dive boat,  Cool picture
Our good friends, Pat and Howard before dinner at the Lighthouse (it really was a lighthouse) on the east side of the island.  The water is much rougher on the east side and it is usually very windy.  It was blowing a gale on this evening and the surf was pounding the shoreline. 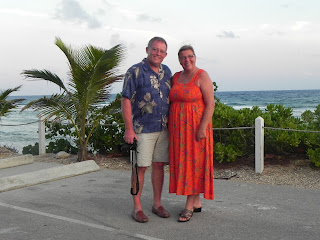 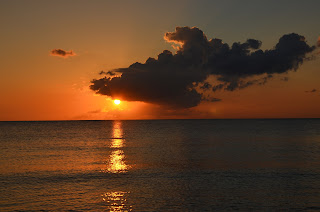 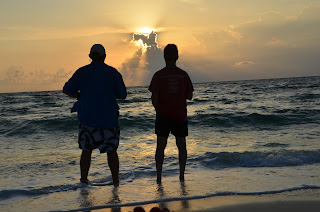 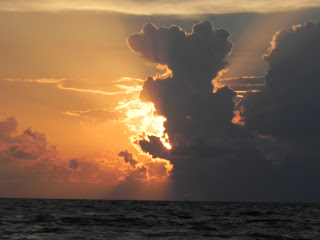 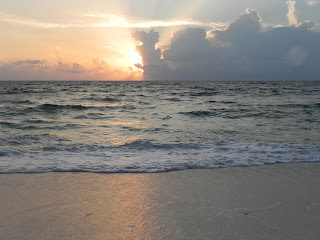